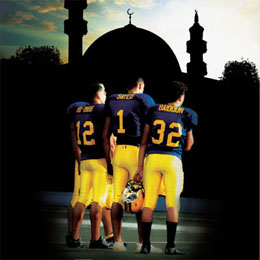 On a personal level, the most surprising aspect of Rashid Ghazi's new documentary, "Fordson: Faith, Fasting, Football," is that he managed to keep it a secret and even managed the time to make it. An old friend, he personally funded and directed this portrait of a week in the life of a tightly-knit Detroit community at the beginning of their 2009 school year. A husband, a father, and tireless executive, he kept quiet about the film, even keeping his name off the original publicity. Simply: he did not want to get attacked by rampaging anti-Muslim zealots who seek to fake scandal where there is none.

In the decade since the 9/11 attacks, we exhibited natural responses. First, the shock and fear. Next, revenge: we obliterated what was left of an already obliterated Afghan population. Then, exploitation: Republicans, Democrats, and self-proclaimed experts capitalized (pun intended) on our national sentiments, and launched an obliteration of Iraq, replacing global sympathy for us with global hatred against us. Soon, parasitic politicians and pundits replaced our short-lived national unity with our own venomous internal political, racial, religious polarization. Now, however, even though the exploitation, wars and rancor continue to increase, we are finally speaking about healing. Finally. 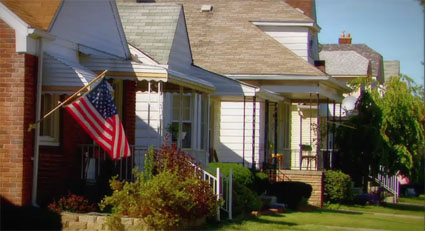 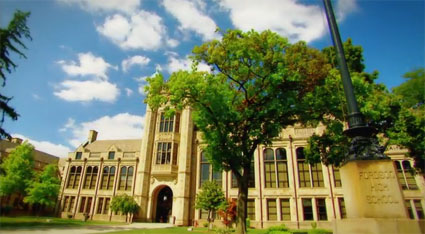 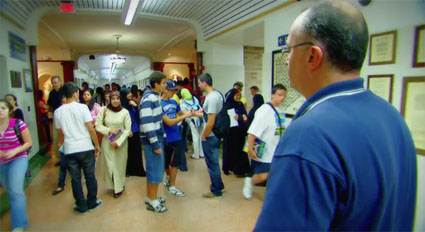 It is in this spirit of national healing that Ghazi brings us his first major film, "Fordson." His is a film not merely about a small Detroit suburb; it is about Dearborn. It is about Fordson High School, where some sixty percent of the students are Arab and/or Muslim. While the insane backlash by Americans against Americans has sometimes targeted Sikhs and Hindus along with the Muslims, no group has been as vilified and attacked as much as the Arabs of America. As Osama Siblani of the Arab American News comments in the film, "We were hit twice on September 11. Once by Osama bin Laden. And second by those who associated us with Osama bin Laden." This vilification transcends 9/11 to include the Palestinian-Israeli situation, as well as further conversations about oil. And, no population of Arabs in America has been subjected to that hate as much as the people of Dearborn, Michigan. 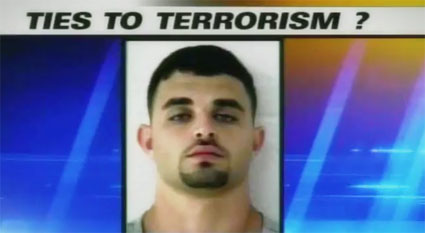 San Francisco is known for its Chinatown. New York is known for its Little Italy. Detroit has its Dearborn. These ethnic conclaves begin when a few families land in America seeking freedom and prosperity, and are followed by extended families, who are followed by friends, who are then followed by former neighbors. Demographics transform; the newer generations become indigenous hybrids merging old with new, foreign with domestic. 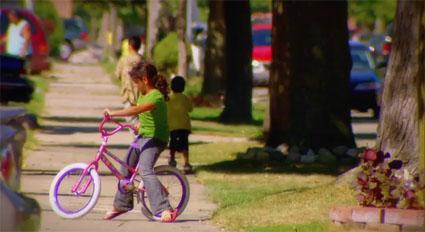 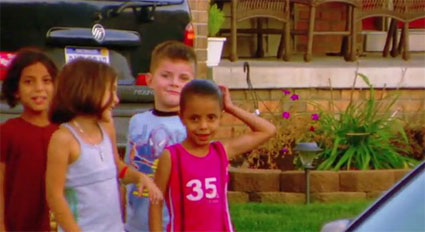 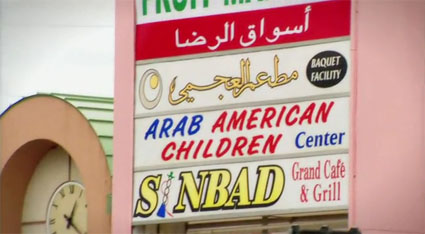 The result is a place like Devon Avenue in Chicago. When my family first moved to the United States, we would drive to Devon to purchase Halal meat. A small Indian grocery shop and an Indian sari "palace" were nearby among miscellaneous Ukranian vendors. These shops were joined by small South Asian electronics stores and restaurants. Now, years later, Indian and Pakistani shops flavor miles of this street, selling anything that would be found in a shop in the subcontinent. Similarly, when I first visited Dearborn, I expected Arab restaurants, physicians, attorneys and brokers. I knew I was in a new world, however, when I noticed that the name of the fireworks store was in Arabic. 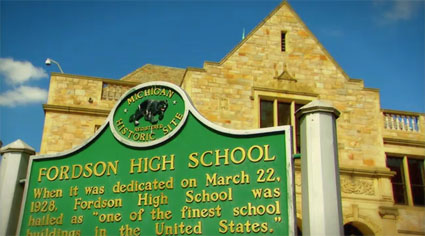 The Dearborn story might trace itself to Henry Ford. Long before the Civil Rights movement, the Ford Motor Company was one of the first major corporations to hire minorities: African Americans, Jews, and Lebanese. Henry Ford soon established a high school in honor of his son, naming it Fordson (i.e. Ford's son). Now, nearly a century later, the majority of Fordson students, faculty, and staff are Arabs of all ethnicities (Palestinian, Iraqi, Syrian, Jordanian, Egyptian, etc.).

Interestingly, I do not recall any of the characters in the movie identifying themselves according to their specific ethnic heritages. Further, there are no conversations in this movie about Palestine/Israel, no conversations about oil, though there are plenty of conversations about 9/11. Rather, these are high schoolers and families, looking forward to the big football game on Friday night against the rich kids on the other side of town.

Adding complication to the story is Ramadan, the Muslim Boot Camp. It is a time of intense personal self-discipline and contemplation, supported by community participation and service. Here, our Muslims players are fasting all day. They wake up, go to school, and race to practice. They come home, break their fast with family, and sleep at night, dreaming about food. In the following year, the school gained national attention for shifting to night time practices (after the students had completed their daily fasting), but in this year, all the practices were conducted in the heat of the afternoon, at full speed with full football gear. 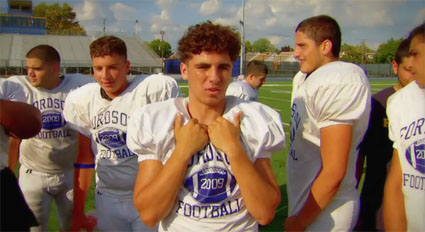 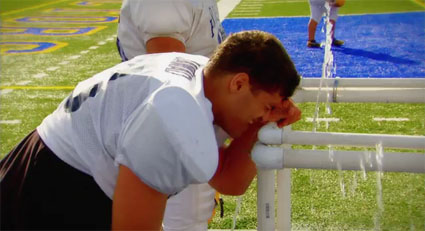 When I screened an earlier, festival print of this film, the narrative was uneven and tedious, but was still strong enough to earn awards. This theatrical cut is streamlined and sharper. In the previous print, the big game seemed tired. Now, the ending seems intentionally, pleasantly anti-climatic. The film places focus on a few of the athletes preparing for the game, but the real narrative paints layers in the evolution and lives of this population as Americans, as Arabs, as Muslims, as people. 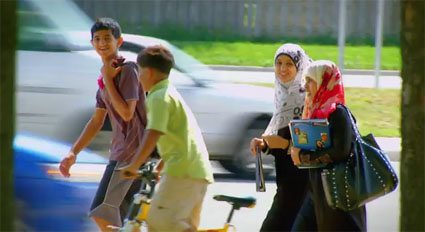 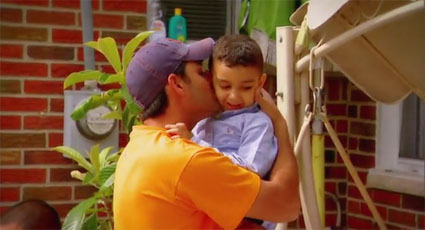 It alternates between sequences about the history of Dearborn, experiences in the high school, personal moments and reflections, and 9/11 backlash. It seems that the fallen towers of 9/11 cast their shadows over this town, sometimes painfully. Nevertheless, the basic goal of these quiet people is to live life day to day, enjoying the simple, pleasant joys that life brings, while getting past the difficulties of a difficult time. After graduation, many of the high schoolers will remain in Dearborn, with no interest in leaving. Some have dreams of the world beyond. Just like any other group of high schoolers. 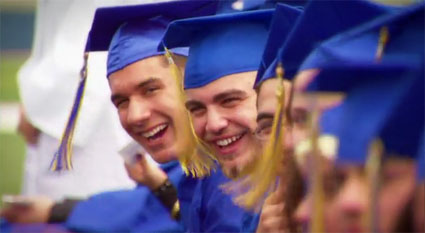 This growing genre of 9/11 films seems to have at least three main branches. There are those films that chronicle the events of that day, including "World Trade Center" and "United 93."

Second, there are those films that speak of the politics of 9/11. Some films critique our national responses, including "Fahrenheit 9/11," "No End in Sight," and "Road to Guantanamo." Some speak of other events, providing thinly veiled references to 9/11 almost as part of a greater chain of events, including "Munich" and "Charlie Wilson's War." Some films tell of the complications of the world, including "Traitor," "Syriana," and "The Kingdom." Some internet films that claim conspiracy, including "In Plane Site" and "Zeitgeist." 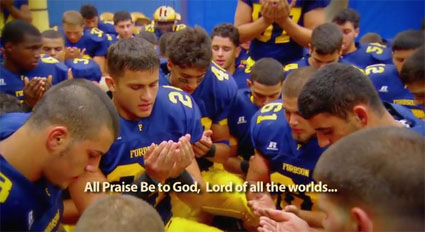 Third, there are those personal films. There are those films that explore our wounds, including "25th Hour," "Man Push Cart," and "Brothers." And, there are those films that seek healing, including "Mooz-lum" (which I previously reviewed on this site), "Reign on Me," "My Name is Khan," and now "Fordson." When my brother-in-law watched "Fordson," he felt chills. A high school football player himself, now a physician who also supports local high school football, he was personally touched watching the players perform their pregame prayers, by reciting the Qur'an. I expect many others will feel the same.