More than Mutual Attraction: On "Our Love Story"

While it is about one specific romantic relationship, South Korean film “Our Love Story” is a lesbian romance drama with universal aspects. The movie's main strength comes from its close, intimate observation on the development of its two main characters’ relationship. There are several touching moments as they feel happiness together, but there are also some bitter moments as their relationship gradually becomes strained later. We come to reflect on why romantic relationships usually require a lot more than mutual attraction.

The first half of the film is mainly told via the viewpoint of Yoon-joo (Lee Sang-hee), an art college student preparing for the exhibition project for graduation along with her schoolmates. She and her schoolmates are going to present their respective works under the guidance of their adviser professor, and Yoon-joo is planning to make her work from various metallic junks to be obtained from a nearby junkyard.

As she looks for anything useful at the junkyard, a young woman around her age comes to the junkyard, and Yoon-joo later encounters her again at a convenience store. When that young woman has a small trouble with buying a pack of cigarette, Yoon-joo gives her a little help, and we soon see them smoking together outside the convenient store.

While she turns out to be younger than Yoon-joo, Ji-soo (Ryoo Seon-yeong) looks more assured and confident compared to Yoon-joo, and she seems to sense something from her new acquaintance. When she suggests that Yoon-joo should drop by a bar where she works, Yoon-joo seems reluctant, but she eventually goes there along with her two colleagues during one evening, though that small evening drinking meeting does not end well to her dismay. 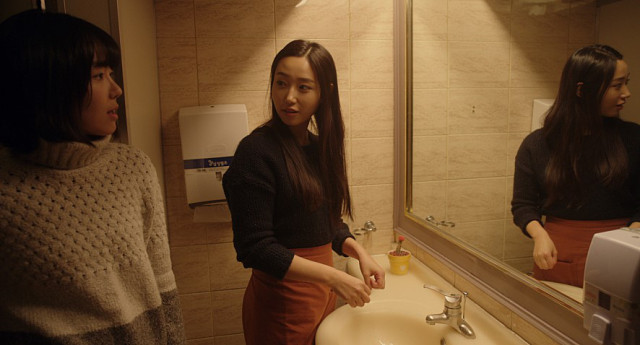 Yoon-joo finds herself more attracted to Ji-soo, but she is still not so sure about what she wants. Unlike her ebullient roommate who is quite forthright about the ongoing relationship with her current boyfriend, she usually keeps her feelings to herself, but her doubt and hesitation feel palpable to us as we look at her shy, docile face.

As a more sexually experienced woman, Ji-soo exactly knows what she wants and, perhaps, what Yoon-joo wants. Not long after Yoon-joo goes back to her residence for sleep, she calls and invites Yoon-joo to another drinking meeting. As they drink wine together at Ji-soo’s residence, they get to know a bit more about each other, and then they soon find themselves lying together on Ji-soo’s bed.

In my opinion, the following moment between them has an important lesson to be learned by any teenagers regardless of their sexuality. When Ji-soo approaches to Yoon-joo first via her soft kiss, Yoon-joo willingly responds to that, but then she changes her mind in the middle of their foreplay, and Ji-soo accepts that without any complaint. Although there is nothing gaudy or sensational in the film, it was rated “18” just because of its subject when it was released in South Korea in last year, a big disservice to adolescent audiences who might have benefited from the film. 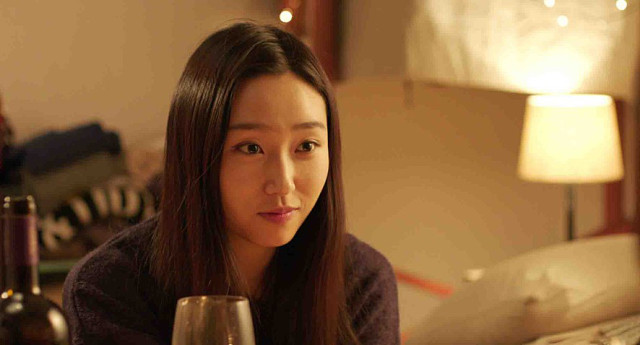 Anyway, Yoon-joo and Ji-soo eventually come to have their first sexual moment under their mutual consent the following morning, and I admire what the director/writer Lee Hyeon-joo and her two performers achieve here. The sex scene in the movie is tastefully and realistically handled with considerable warmth and sensitivity, and we often feel like an unseen observer in the room as the handheld camera constantly sticks close to their carnal progress. After the Q&A session followed by a screening I attended during one Saturday evening of November 2016, I told Lee how much I was impressed by this realistic scene, and I also pointed out to her that some of the sounds heard during this scene actually felt like the noises being made by her cinematographer Son Jin-yong, who did a terrific job of capturing the characters’ emotional interactions well on the screen. Lee replied to me that my impression might be correct at least partially, and I still do not know whether it was a joke or not.

After their first sex, Yoon-joo and Ji-soo becomes closer to each other, and Yoon-jo begins to consider living together as a couple, but then they come to face each own matters of reality. Ji-soo soon moves back to her family home in Inchon, and she lives again with her Christian widower father, who has no idea on his daughter’s sex life and is still hoping that she will marry some good guy someday. At one point, she has a date with a guy introduced via one of her father’s acquaintances just because her father wants that, and that reminds me of my perfunctory dates with a number of young women recommended by my mother, who is still in denial even after I came out of the closet in last September.

In case of Yoon-joo, she feels like being drifted apart from Ji-soo after she goes back to Inchon. Although they continue to meet each other from time to time, Yoon-joo is disappointed and frustrated especially when Ji-soo hides their relationship from her father. To make matters worse, she also goes nowhere in her art project, and that adds more agony and frustration to her increasingly complicated life.

In its unadorned, restrained storytelling approach, the movie keeps its main characters’ emotional matters grounded in reality, and there are numerous realistic details to notice in the film. I especially appreciated the myriad details shown from Yoon-joo and her colleagues’ workshop, and Lee later told me about how she tried to make that place look authentic with several artworks specially prepared for her movie. The workshop in the film does look like a real place where aspiring young artists like Yoon-joo would spend many hours, and other places and locations shown in the movie are also realistic as mundane parts of our heroines’ ongoing daily life. 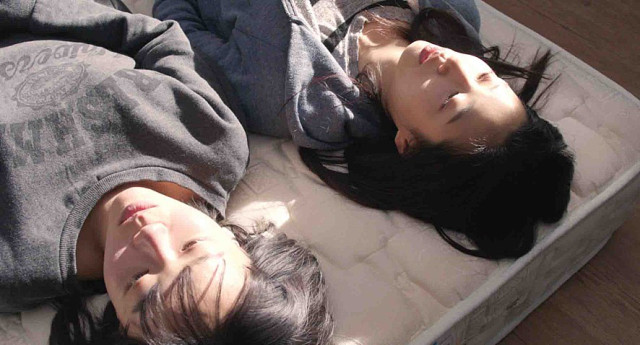 The movie is supported a lot by the undeniable chemistry between its two lead performers. Lee Sang-hee is poignant as her character tentatively enters her uncharted emotional territories, and she and Ryoo Seon-yeong generate subtle emotional dynamics between their characters. Thanks to their nuanced performances, we always can sense their characters’ thoughts and feelings even when they do not say much, and that is why it is sad to watch when Yoon-joo and Ji-soo come to see how much they become distant to each other.

As this movie is essentially Lee and Ryoo’s show, the supporting performers surrounding them are also believable in their respective roles. As Yoon-joo’s former schoolmate, Park Keun-rok has one amusing scene where he functions as a close straight male friend to listen to her, and Lim Sung-mi has a quiet but tense moment when her supposedly open-minded character shows her silent anger and disgust to Yoon-joo. While briefly appearing in only one scene, Lee Tae-ri ably suggests a history between her character and Ji-soo, and we come to wonder what happened between them before Ji-soo meets Yoon-joo.

By the way, last year was quite an interesting year for me and other South Korean audiences. Besides “Our Love Story” and “The Handmaiden”, we got “Snow Path” (2015), “Steel Flower” (2015), “The World of Us” (2016), “The Truth Beneath” (2016), “The Queen of Crime” (2016), “Queen of Walking” (2016), “Worst Woman” (2016), “The Bacchus Lady” (2016). All of these good films gave us strong female characters to remember while bringing some fresh air into South Korean film industry. I am not entirely sure whether this is an emerging new trend or not, but I really hope that I and other South Korean audiences will be treated with more films like them.