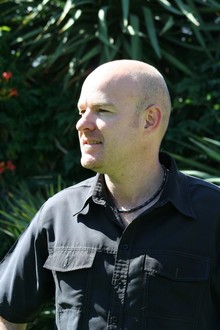 I was born on the 20th of March 1974 in sunny Johannesburg. My love of movies began at a very young age. 80's classics like "E.T. The Extra Terrestrial," "Back to the Future" and "Rain Man" inspired me to study film after leaving school. At the Pretoria Technikon Film and Television School, my natural talent for low budget clay-mation was discovered when I threw together a one minute mixed-media animated short in the space of a day, which went on to score a unanimous 95% from the resident lecturers.

Since leaving film school in 1996, I've been involved in numerous productions for South African television, working as writer, director, animator and editor on shows such as Options, Arts Unlimited, Rise up and Read, Red Bull Flugtag, Sanlam Money Game, Golf Digest TV and Ultra Simple Golf, as well as numerous music videos, commercials and corporate training films. I also wrote, directed and edited Man in the Street, a micro-budget feature film screened at the Cannes Film Festival in 2003.

I went on to single-handedly complete South Africa's first ever animated feature, "Tengers," a low budget clay-mation film that satirizes life in contemporary Johannesburg. It was written and storyboarded in 1999, and up until 2007, I put every spare moment into bringing the story to life through my own unique style of animation.

Having been selected for numerous international festivals, winning Best Animated Feature at the DIY Festival in Los Angeles, and the Golden Zebra for audience favourite at Afrykamera film festival in Poland, "Tengers" has proven to be a one-of-a-kind original, a funny and touching personal story with universal themes that an international audience can relate to.

See my filmography and web links below.

My comments on "District 9"

Here is the "Tenegers" web site. •Mike at IMDb.com.