Life as a poker game 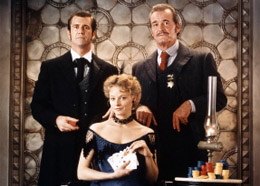 "Maverick" starts with the protagonist in the middle of nowhere. He helplessly sits on a horse; his neck is at the end of a noose tied to a tree branch. The men who put him in this vulnerable situation surround him. They drop a bag containing a snake and ride away. If the horse bolts, Bret Maverick dies. It is one of the most attention-grabbing opening scenes in film.

Available via Netflix mail, or streaming for $2.99 on Amazon or Vudu.

Wael Khairy is an Egyptian national film critic. He has written reviews and essays for two World Film Locations books published in the UK. His revolution-related tweets were published in the bestseller, Tweets from Tahrir.

Wael also writes ads for BBDO, the multinational advertising agency in the world. Besides his website www.cinephilefix.wordpress.com, Wael also writes regularly for The Spectator's arts blog. He graduated from the American University in Cairo and completed his degree in film at UCLA.

"It had just been a shitty week for me from the beginning", he narrates as we embark on a lengthy flashback that leads to this critical point of our hero's adventurous tale. Make no mistake, the intense opening does not encapsulate the film's tone, for "Maverick" is the kind of old-fashioned western comedy we rarely see nowadays. The film is in the tradition of slapstick Hollywood classics set in the Old West. Despite falling under a dying subgenre, director Richard Donner of "Lethal Weapon" and writer William Goldman of "Butch Cassidy and the Sundance Kid" managed to create one of the highest grossing westerns of all time.

It also happens to be one of my personal favorites. Every time I watch it, I can't help but smile. It puts me in an upbeat mood and just plain and simply brings the best out of me. The reason I'm writing about it a good 18 years after its initial release date, is because it has become undeservingly forgotten. "Maverick" deserves the same great mentions received by other similarly molded feel-good classics like "The Sting".

Mel Gibson was born to play this role and no matter what you think of him as a person, one must give him credit for being one the most talented actors out there. "Maverick" features a great and underrated performance unlike anything Gibson has done before. This could easily have been a flat performance had it been given to another actor, but Gibson uses a wide range of perfectly timed facial expressions completely owning the role and the audience. I think the humor feels so natural and genuine, because it seems to come out of character and situation. Frankly, it is hard to believe that the actors broke character when Donner yelled "Cut!" in between takes.

Jodie Foster and James Garner deliver equally entertaining performances as the flirty Annabelle Bransford and Zane Cooper, a marshal who always seems to have a trick up his sleeve. We follow all three in a serious of comedic episodes leading to the biggest poker tournament ever assembled. To enter the tournament each player is required to pitch in with $25,000. Everyone involved seems to be a little short of that, and so the threat of not stockpiling the entry fee on time always lingers.

Donner created a minor classic full of unpredictable twists thanks to a hilariously dialogued screenplay that deserves mammoth praise. "Maverick" is also one of those films rich with smooth references to everything from the original "Maverick" TV show starring Garner as the leading man to other classics such as "Stagecoach" (1939) and "Butch Cassidy and the Sundance Kid". It also features a pleasantly surprising cameo of Danny Glover in a hysterical bank robbery where both "Lethal Weapon" stars almost recognize each other.

It is impossible for me to name a favorite scene, because "Maverick" effortlessly flows from one memorable chapter to the next. Take for example, the first poker scene in which Maverick promises to lose for a decent hour. It leads to a sidesplitting confrontation between Maverick and the intimidating villain Angel played by Alfred Molina. Molina's priceless fearful reaction after witnessing Maverick in a brawl outside the bar always leaves me laughing in tears. Another great scene is the comedic recreation of the famous stagecoach stunt or the fake Indian sacrifice with Graham Greene.

Even though the film features few unrealistic yet engaging poker scenes, at its core, it's a brilliant poker film. No matter what misadventure he finds himself in, Bret Maverick always seems to be in a poker mindset. He uses the rules of poker to con his way out of every incident, which makes for a smart masterpiece of pure good old times at the movies.