Most of you have probably heard about the Rwandan genocide in 1994. When I heard about it for the first time, it seemed to be no more than one of those small, trivial international news I got from TV, but I gradually came to learn about its sheer atrocity and countless tragedies, and I also watched several good movies about the Rwandan genocide including “Hotel Rwanda” (2004), which showed us how ineffectual the international community was at that time while 500,000-1,000,000 people were killed during that horrible incident.

While “Hotel Rwanda”, which is powerful in its own approach to the subject, mostly focused on the one desperate situation surrounded by the Rwanda genocide, Alrick Brown’s small but strong film “Kinyarwanda” (2011) looks inside the Rwanda genocide with a wider view through the various local people who suddenly find their daily lives turned upside down after the Rwandan president Juvénal Habyarimana was assassinated along with the Burundian president Cyprien Ntaryamira on April 6th, 1994. As the narrator says, during the long darkness of the next 100 days, some people became heroes who rose to the occasion in front of the massive evil fueled by tribalism while others became villains who went along with others and participated in the massacre, and the movie presents some of these people through a group of short stories powerfully interwoven with each other.

The first story in the beginning is effective with the ominous mood slowly crawling on the screen as depicting a group of teenagers enjoying each other’s company in the room during one sunny afternoon. One of the girls, Jean (Hadidja Zaninka) sees the militia goons passing by the window outside, but the mood in the room remains joyful and comfortable with the music from a portable radio/cassette player – except when it is momentarily disrupted by that virulent and vicious propaganda radio message propagating the Hutu Power ideology around the country.

Jean and her boyfriend Patrique (Marc Gwamaka) are in love, and they do not worry about much even though they are well aware of the difference between them. In our view, they look same and they speak the same languages (English and Kinyarwanda), but I remember Lee Isaac Chung, the director of another Rwandan film “Munyurangbo” (2007), told us during the Q & A session at 2010 Ebertfest how easily the Rwandan people can distinguish from the Tutsi, which means “those rich in cattle”, and the Hutu, which means ‘servant’. 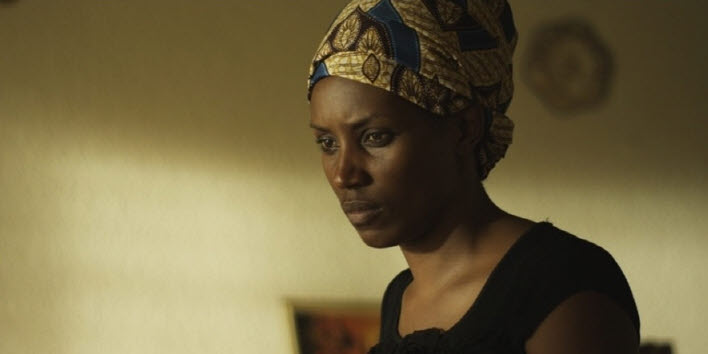 This class/tribe difference had already existed during the pre-colonial era, but this distinction was more standardized and officialized by the Belgian rule through measuring rib size and facial features because the Belgian people found it useful for their rule, and Rwanda ultimately became one of the worst cases of the combination between tribalism and colonialism as a consequence. The distinction through different ID cards was still maintained even after the end of the Belgian rule, and the ethnic tension between the Tutsis, the ruling minority, and the Hutus, the dominated majority, had steadily increased through the continuing conflicts. When the civil war in 1990 between the Tutsi rebel group, Rwandan Patriotic Front (RPF), and the Hutu-led Rwandan government seemed finally to reach to the end through the cease-fire, the aforementioned assassination happened, and that quickly triggered the violent brutality of massive scale all over the country which were virtually backed by the Rwandan government and military.

In such a dangerous situation in which ruthless tribalism rages through the reign of its savage terror, not only the Tusti people but also the Hutu people standing by them are targeted. Later in the movie, we see a Hutu husband and his Tutsi wife dealing with their private problem at their home while also talking about what to do with the perilous circumstance outside. Even though their world is going mad, a certain matter in their strained marriage seems to be a little more important to them, and their bitter conversation feels poignant as we realize what will happen to them in the end.

We also see the Tutsi priest, Father Pierre (Mazimpaka Kennedy), getting an unexpected help when he tries to run away with other people after being betrayed by his fellow priest. They are protected by the local Imam (Abdallah Uwimana), and, after the long discussion with him and other Imams, the Mufti of Rwanda (Mutsari Jean), the leader of Rwandan Muslims, issues the edict saying that all Muslims in Rwanda must protect and shelter the people in their mosques regardless of race and religion. They clearly know the limits in their power and resource to prevent mass killing, but they try none the less because it is a right thing to do in their moral/religious view, and it is touching to watch Muslims and Christians stick together in front of the approaching danger at one point.

There are other plain but memorable people in the movie, and all of their stories are juggled and shuffled well by the director/screenplay writer Alrick Brown. Based on the story written by the executive producer Ishmael Ntihabose, his screenplay rolls and connects its vignettes through several powerful moments, and we gradually see how its small pieces are gathered together to make a big human tapestry while encountering some surprising or revelatory turns waiting for us. While one small adolescent digression saves one character from danger by coincidence, one innocent interpretation of the word ‘cockroach’ ultimately causes a very suspenseful moment which is later turned out to be more dangerous than we thought.

Shot in Rwanda with the help from the local people, Brown made a film filled with the vivid local atmosphere and impressive verisimilitude, and it is rather remarkable that he and his crew made their film with around $400,000 under the tight shooting schedule (According to IMDB trivia, it was filmed in the total 16 shooting days). This small-budget film looks slick and natural, and I was very impressed to learn that they managed to shot one certain night sequence despite lots of grasshoppers flying around during that night. They found a way to deal with those insects though lighting equipments, so, as you will see in the film, this quiet but gripping sequence is devoid of grasshoppers.

Under Brown’s unforced direction, his cast, who consists mainly of non-professional actors, brings lots of life to the simple but vibrant characters through honest performances, and the few professional actors like Cassandra Freeman and Kena Onyenjekwe, who play RPF soldiers who come from Uganda to Rwanda for protecting the refugees, do not look awkward with others on the screen. The plot involving these soldiers feels like a cliché at times and they sometimes look like belonging to the other movie, but their part remains as another perspective added to the big picture.

The movie also has the sense of humor as one of its ingredients. For instance, a young boy named Ishamael (Hassan Kabera) is introduced to us in an unexpectedly colorful way which cheerfully incorporates the small details of his dire environment into his hopeful imagination. How his innocence causes and resolves the disturbance in his family house is amusingly balanced between humor and suspense, and there is an open question on how much he understands the situation happening right in front of his naive eyes while his family members are seriously threatened by a trio of menacing militia goons led by the leader Emmanuel (Edouard Bamporiki).

In another powerful moment involving the Re-education camp in 2004 , the camera stares at the faces of the people who participated in the genocide, and we see them talking about what the atrocities they committed. It is hard for both victims and perpetrators, but repentance is eventually followed by forgiveness, and the glimmer of hope is observed. Although it was devastated by the genocide on many levels, Rwanda and its people succeeded in moving forward, and, even though that turbulent time is still a touchy subject even at present, the tribal discrimination is erased now in the society. Last week, I watched several episodes on Rwanda from a TV documentary program, and, as far as I can see, it certainly becomes a better place despite other remaining social problems.

I once heard that “Hotel Rwanda” was criticized for its limited view on its subject. Its view is surely limited by its story, but it works as a very moving story about one ordinary but brave man who saves lots of people from the mass killing, and there are other movies like “Munyurangabo” and “Kinyarwanda” which can tell us more about the Rwandan genocide. While “Munyurangabo” tells so many things through one seemingly simple story about the friendship between two Rwandan boys, “Kinyarwanda” looks outside “Hotel Rwanda” and it powerfully shows us the ordinary people doing right things or wrong things amidst one of the biggest human tragedies during the late 20th Century.
Advertisement

While preparing this review, the sad news about the death of my dear friend/mentor Roger Ebert came to me. Rummaging through the tributes and obituaries and remembrances on him, I came across a video clip from Colorado Public Television Channel 12, and it showed him delivering a passionate speech on various subjects including film history, education, tribalism, and his hope for the mankind.

Maybe because of this movie, his thoughts on tribalism came particularly close to me. Tribalism, one of our most savage sides, makes us to label and vilify people different from us, and that is where most of the big tragedies in the human history originated from. It makes the people blind to what they do to the other fellow human beings with that horrible logic of ‘it’s us or them’, and that is well exemplified by the Hutu soldiers and goons in the movie, who regard Tutsi people as something no more than ‘cockroaches’ to be exterminated.

Observing the continuing bloody parade of human savagery around the world, I sometimes wonder whether we really learn anything from our stupidity and subsequent terrible deeds. But, as reflected by “Kinyarwanda”, we human beings are also capable of empathy and compassion even under the grave circumstance like what is shown in the movie. We will be still stupid as ever for a while, but, as my friend Roger believes, we are not that incorrigible. Like the characters in the movie, we can do better than we think – for the better world.