This past January, Ken Burns was in Pasadena for two reasons: as the 2016 Tournament of Roses Parade grand marshal, promoting both the parade's theme of "Find Your Adventure" and the April re-broadcast of his 2009 series "National Parks: America's Best Idea," and to promote his new, two-part special on one of Pasadena's favorite sons, "Jackie Robinson," which will premiere on April 11-12.

Burns noted that the National Park Service "had already started their campaign to 'Find Your Park' in celebration of their centennial and in that way he was "the logical person to bridge that gap." When the "National Parks" series originally aired, Burns stated it "was responsible for a significant uptick in visitations to the parks." While Yosemite was the first national park and set aside in the late 1800s, it wasn't until 1916 that "they actually got someone to take care of it." The National Park Service was created. The series will air without any update.

Burns noted that "The National Park idea is continually evolving. At the beginning it was setting aside places of indisputable natural wonder like the falls of Yosemite. Then it moved and metamorphosed in many different ways: saving things of historical or scientific interest, or protecting species or diversities of populations, or important battlefields. Even things that remind us of shameful aspects of our past—slave cabins or Central High School in Little Rock, Arkansas. Shanksville, Pennsylvania, where the heroic passengers of United Flight 93 on Sept. 11 directed the plane into the ground rather than into the White House or the Capitol Building. We've constantly evolved. The great thing about national parks is that no matter what you do, historically, it requires an additional conversation."

As many movie fans know, the national parks have also served as backdrops for films. Burns noted that "they become perfect backdrops because they are as they were seen by the native peoples." His favorite national park cinematic moments would be the climatic scene for "North by Northwest" on Mount Rushmore, or the dramatic ending on the Statue of Liberty in "Saboteur."

While "National Parks" will be re-broadcast in the latter part of April, Burns' new documentary on Jackie Robinson will air during the second full week of April. Although Robinson was born in Cairo, Georgia, he was raised in Pasadena, attending John Muir High School and what was then called Pasadena Junior College (now Pasadena City College). From there he attended UCLA where he lettered in four sports (baseball, basketball, football and track) and met his future wife, Rachel Isum.

Pasadena is proud of both Jackie Robinson and his older brother Matthew "Mack" Robinson. There's a Jackie and Mack Robinson Memorial to both men in front of city hall. PCC flies a pennant prominently remembering Jackie as an alum. The PCC's 5,400-seat stadium was named after the two men. A post office was named after Mack.

Mack was a silver medalist at the 1936 Berlin Olympics, finishing behind Jesse Owens in the men's 200m, but he came back to a job as a street sweeper. Neither he nor his brother would serve as a Rose Parade grand marshal while they lived. Jackie Robinson was the first posthumous grand marshall in 1999, but shared the official honors with the very much alive astronaut Buzz Aldrin, actress-turned-diplomat Shirley Temple Black and TV and movie producer David L. Wolper.

What you won't find in Pasadena is the 121 Pepper Street home where Mack and Jackie were raised. Burns opined, "Sometimes in our foolishness these things are lost. I'm saddened that we don't have a house that we can go and touch—there's a little marker on the sidewalk. It doesn't seem fitting. I'm sad that the city fathers, in their infinite wisdom, let an important landmark disappear." 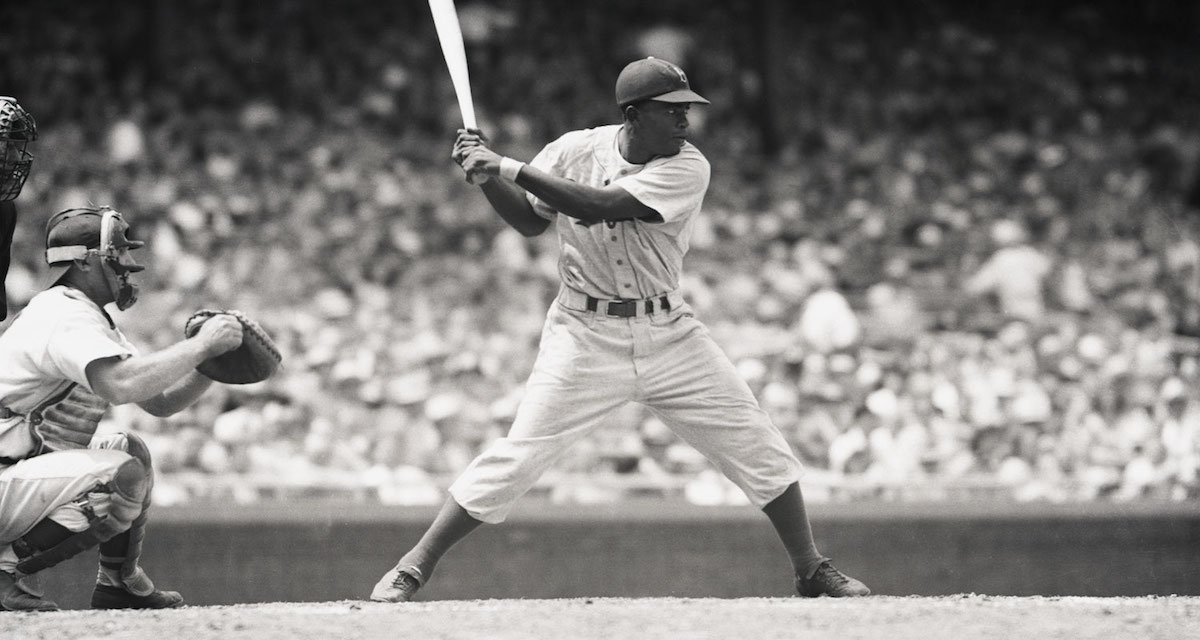 Directed by Ken Burns, Sarah Burns and David McMahon, "Jackie Robinson" is, according to Ken Burns, "an extraordinary love story." Burns explained, "After we interviewed Rachel in 1992 (for the 1995 Emmy Award-winning "Baseball" series), I felt this was the moral center of gravity." Burns noted that Jackie Robinson was "so smothered in mythology" that he and his team had to "dig down" in order "to add complexity to the superficiality of that mythology." Of course, many people wanted to do a documentary and according to Burns, "Twice somebody did, but twice she was not happy with them."

Jackie's widow, Rachel, explained during the TCA PBS presentation on the documentary, "They didn't put together the standards that we needed to see, so we had been turning people away." Burns was working independently and not under the supervision of the Robinson family, but Rachel feels they got it right. "I went to it quaking because I didn’t know how Ken would interpret Jack's life. I was very nervous. Right from the beginning, I saw that Ken was trying to understand him and his place in history. By the middle of the film I was very pleased and I didn’t find anything wrong with it."

Rachel had reservations when she first met Jackie, she confessed, "When I first met, him, the very first meeting, was set up by a football player, I was a freshman and he was a senior. I heard he was big man on campus. I thought he’d be this egotistical man. He had a beautiful smile. His manner was so quiet and respectful. I think I fell in love with him on the first day." When Jackie and Rachel finally committed to each other what followed was a five-year engagement, "We would not get married until I had graduated from college and he had a job. We had a partnership going before we were married."

Rachel would be the only wife allowed at spring training. "The hotels would not let us room in the same place where the team was. We had a little, tiny room at the top of the staircase. We decided we would keep our living place a haven." She recalled that things weren't easy. "We went to three different restaurants in the neighborhood and they wouldn’t have us. We fell across the bed laughing. Those who are torturing you are the enemy. The only triumphs we had was we didn’t go hungry and we didn’t get angry at each other."

On the many movies made about Jackie and Rachel, Rachel said of the actresses, "They weren’t me. They were telling a story; I thought they were using their professional skills. I just wanted them tell a story accurately and not try to impose their own feelings on the content because I wanted them to be honest."

Burns quickly added, "I think that’s the best argument for documentary that I have ever heard." While the documentary uses Jamie Foxx as the voice of Jackie, Burns noted, "The best thing of the film, we have this extraordinary person as herself." He also commented, "Baseball is the best game that has ever been invented. It’s the only game that accompanies all the national narrative."

"Jackie Robinson" airs on April 11-12 at 9 p.m. to 11 p.m. ET. Check local listings. Part one follows Robinson as he integrates Major League Baseball with the then Brooklyn Dodgers. Part two shows how Robinson became a civil rights pioneer and used his fame to speak out against racism. Jackie Robinson died in 1972 at age 53.

"The National Parks: America's Best Idea" is an Emmy Award-winning six-part, 12-hour series that took more than six years to make. In celebration of the centennial of the National Park Service, PBS will have an encore broadcast, on April 25-30, 2016 at 9 p.m. ET. Check local listings.