It takes all kinds of critters 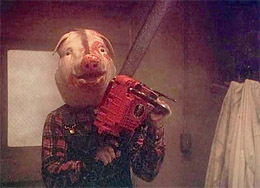 There have been many horror movies about deranged characters and their insane deeds which make most of us cringe. As a diligent moviegoer, I have frequently encountered such movies, and I found some of them were enjoyable while others were repellent. While I saw a sense of humor in that ruthless South Korean horror movie "I Saw the Devil" (2010), my eyeballs were rolling in disbelief and disgust in the case of a movie called "The Human Centipede" (2009) and its more atrocious sequel.

What I conclude from my experience with these horror films featuring twisted characters is that they need something else besides gore and brutality to be scary and entertaining. They need good stories and good characters. They need a personality to engage us. Dr. Hannibal Lector is a brutal serial killer who eats his victims, but he is a gentleman--witty, courteous, and sophisticated enough to be your dinner guest as long as you are not rude enough to be served as the main course. The hero of "Henry: Portrait of a Serial Killer" (1990) absolutely chills us with the casual attitude to his 'ordinary' crimes, which are pretty much like mundane part-time jobs to him and his partner. In "The Girl with the Dragoon Tattoo" (2011), a certain character would remain as interesting as other possible suspects in the story even if he did not turn out to be the sadistic serial killer in question.

It is too bad that most horror movies featuring serial killers regrettably ignore this lesson; they instead focus on the depressing business of killing or tormenting characters sadistically, and they invariably leave a bad taste in my mouth without any satisfaction when the end credits roll. While watching "Friday the 13th" (2009), I thought that there would have not been much difference if Jason Voorhees had been played by a big Duracell bunny wearing a hockey mask instead of some big stuntman guy wearing a hockey mask (wait a minute, that could have been more amusing - Duracell the killer bunny!).

A low budget horror movie "Motel Hell" (1980) is no great horror movie at all, but it has personality in its sleaziness at least, and I appreciated the twisted sense of black humor inside its gruesome premise associated with serial killing and cannibalism. Its idea sounds disgusting but the people behind the movie knew that their tasteless subject needed humor to be a tasty horror film with guilty pleasure, and they amply add it to the grotesque sights in the film as their Worcestershire sauce.

If a special meat product is prominently featured in a horror film, you usually have a pretty good idea about how it is made. The rural farmer Vincent's special smoked ham and other processed meat products are popular around his region thanks to his secret ingredient, and he proudly boosts to his happy customers that he does not add any chemical or preservatives to his fresh meat at all. He cheerfully says to his customers: "It takes all kinds of critters to make Farmer Vincent's fritters!" 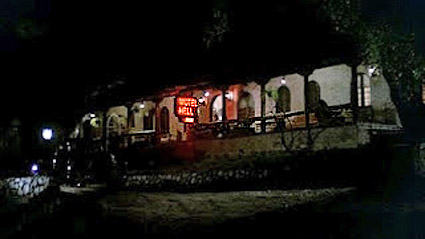 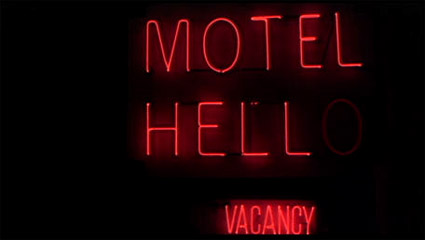 Vincent (Rory Calhoun) also runs a motel right next to his farm (Motel Hello - with the last 'o' constantly flickering on and off in its neon panel), and, though it is not successful compared to his meat business, he keeps managing it with his nutty sister Ida (Nancy Parsons). If there are not any people coming to their motel, well, they go out for hunting them at night.

Oh, yes, his secret ingredient is none other than... human meat! His victims, mostly unlucky strangers passing by Vincent's town, are captured on the road near the motel, and a horrible fate is waiting for them in Vincent and Ida's secret garden hidden at their farm. The victims are buried in the ground up to their necks, and the sight of their heads on the ground looks like a bizarre version ofa cabbage field. Their vocal cords are surgically cut to prevent them from shouting for help, so they can only make weird gurgling sounds from their mouths. They are fed like animals by Vincent and Ida until they are fattened enough, and then they are ready to be slaughtered. I wondered how their bathroom business can be taken care of during this gruesome process which would probably take 2-3 days at least, but, seriously, I don't want to know. 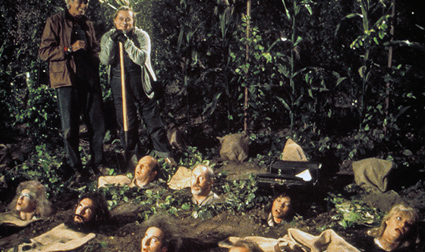 This is indeed disgusting, but the director Kevin Connor draws considerable laughter out of this crazy premise while trying to horrify us with good scary scenes. The movie is basically a black comedy, and we are mainly treated with darkly funny moments instead of the gory details of Vincent and Ida's evil business. Though the plot is rickety and there are elements that do not work as intended in the screenplay, Vincent and Ida are compellingly horrible enough to carry the story to its full-blown finale with their eccentricities. Calhoun and Parsons have lots of fun with their twisted characters while dancing on the borderline between campy grotesqueness and folksy earnestness, and the screenplay writers Robert and Steven-Charles Jaffe provide them lots of juicy one-liners to be chewed with glee ("Meat's meat, and a man's gotta eat!"). 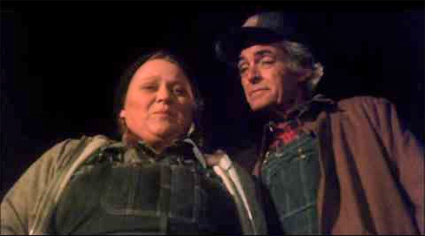 When an innocent girl named Terry (Nina Axelord) is brought to their house by Vincent after "the accident" happened to her and her biker lover, the daily life of Vincent and Ida becomes a little troublesome due to her presence in their house. They keep on working while merrily hiding their hideous secret from this vulnerable girl, and Terry has no idea about the circumstance she is placed into while being grateful to the kindness of strangers. 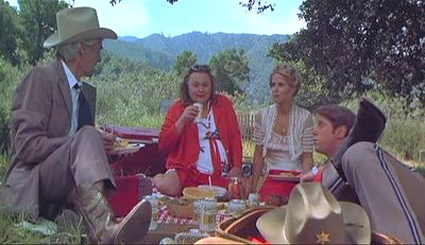 How naive Terry is, by the way. When she asks about her boyfriend after waking up at Vincent's house, Vincent tells her that he died and his body was buried in the town cemetery, and she totally believes him without any doubt. She does not wonder at all about why her boyfriend was so quickly buried without proper legal procedure, and neither does a young bumbling town sheriff (Paul Linke), who is incidentally Vincent and Ida's relative and definitely not the brightest bulb in the family tree.

Meanwhile, it seems that, like Kong is drawn to Ann Darrow, Vincent has been interested in Terry since he captured her on the road. He now considers marrying her, and he hopes that she will accept his way of living someday when she learns about his business. Ida naturally becomes jealous of Terry as a family member who has been closer to Vincent than anyone else, but she follows her brother's decision. I think Vincent is old enough to be her father, but I guess he is still a charming guy in front of Terry's eyes - perhaps in a Freudian way (come to think of it, her 'deceased' biker boyfriend was not that young).

While Terry is unwittingly becoming the bride of a monster, the dim town sheriff, who also likes her in a clumsy and quite insensitive way, finally begins to have suspicions about his good old relatives who have generously given him lots of smoked ham to eat. Therefore, it is a matter of time before they witness unpleasant sights at the farm. 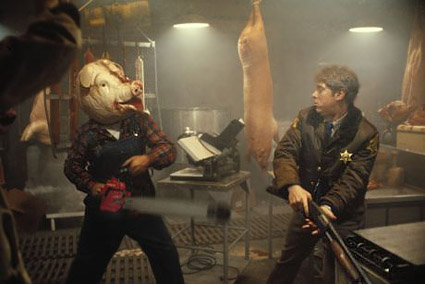 After the tactful restraint on blood and gore in its first two parts, the movie finally delivers a violently entertaining finale during its third act where "Night of the Living Dead" (1967) strolls with "The Texas Chain Saw Massacre" (1974). We have the elements rightfully expected from that kind of a crossover: hideously groaning sounds heard in the dark of night, a smokehouse of horror, a bound woman in mortal danger, a maniac going berserk, and a fatal chainsaw duel of the fates. Despite the limits due to its low budget, these elements are well mingled on the screen. This is less shocking compared to the mind-numbing climax of "The Texas Chain Saw Massacre," but easier to be enjoyed I guarantee you, if you like its morbid comic nature, Vincent's last words at the finale is something you must hear from him for yourself, not from me. 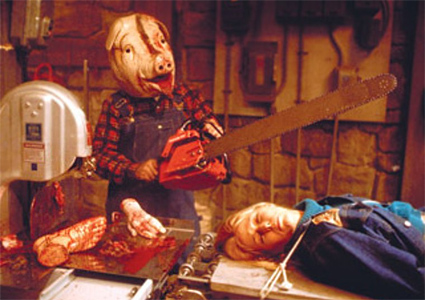 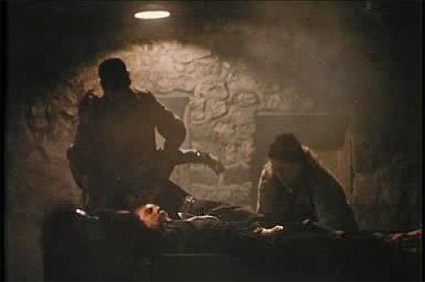 The movie is sleazy and funny in its macabre way while doing what is required in its genre without damaging our entertainment. In spite of its many notable flaws (the supporting characters are mostly flat or boring), "Motel Hell" is one of the nice proofs that you can make an enjoyable movie with a tasteless subject if you have style, skill, and good characters for handling the story. If you appreciate grisly but deviously humorous horror movies like "The Devil's Rejects" (2005), I think you may find this movie yummy enough to be enjoyed at a Steak 'n Steak restaurant.