The opening scene of “Eve’s Bayou” is one of the most captivating opening lines I have ever encountered: “Memory is the selection of images, some elusive, others printed indelibly on the brain. The summer I killed my father, I was 10 years old.” As we wonder about what happened during that summer in question, the movie immerses us into the small, vivid world of its young heroine who is trying to process what has been swirling inside her good but inherently problematic family. “Eve’s Bayou” is a haunting drama of love, hate, guilt and sorrow, and is surprisingly more complex and powerful than expected. It freely drifts around emotional realism and magic realism via its distinctive Southern atmosphere.

The film is set in Louisiana during the early 1960s. In the opening scene, the narrator tells us about the origin of this swampy but beautiful little place. A long time ago, a slave woman named Eve saved her French master’s life through her powerful medicine, and she was rewarded with not only freedom but also a piece of land. She subsequently bore her master’s 16 children, and we are told that our young heroine and her family are this slave woman’s direct descendants.

Named after her ancestor, Eve Batiste (Jurnee Smollett-Bell) is the second child of the Batistes, and we observe their prominent social status in the town as a party is being held in their big, lovely mansion. While her father Louis (Samuel L. Jackson) is a successful doctor who is also pretty popular around the town, his wife Roz (Lynn Whitfield) is a fair lady with grace and class. Their three dear children have grown up in an affluent and sophisticated environment, as reflected when one of them quotes a line from a classic play by William Shakespeare.

Looking around these characters and others at the party, the movie lets us sense how much Eve feels overlooked compared to her two siblings. While her younger brother Poe (Jake Smollett) is mommy’s little prince, her older sister Cisely (Meagan Good), who has just has turned 14, is daddy’s little princess, and Eve cannot help but feel envy and jealousy as watching Cisely dancing with their father in front of party guests. At least, Eve has Louis’ sister Mozelle (Debbi Morgan) and her sweet husband Harry (Branford Marsalis), but she is disappointed about her father not dancing with her, and she promptly goes outside the house then sneaks into the warehouse.

Not long after she is asleep in the corner of the warehouse, Eve is awakened by some sound and happens to witness something very inappropriate between her father and a married woman she knows. Right after noticing her presence, Louis calms down his shocked daughter, and their relationship seems to remain intact on the surface as he promises to her that he will dance with her in next party. But Eve cannot possibly forget what she saw through her own eyes. When she later confides that to Cisely, Cisely says that she simply got a wrong impression at that time, and she even gives Eve a plausible alternative version of what happened in the warehouse. 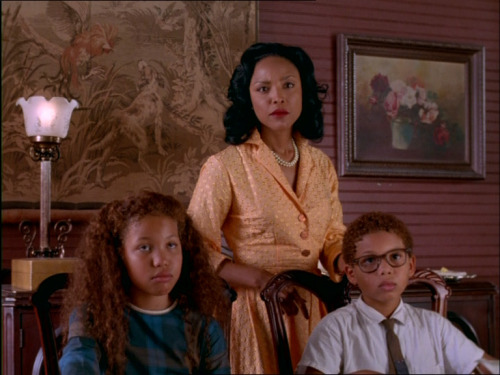 While not so sure about what she really saw, Eve could just believe what Cisely told her, but then she becomes more aware of a trouble growing inside her family. During one evening, Roz is quite angry about an unspecified problem involved with Louis, and that surely draws the children’s attention. When Eve spends some time with her father during his worktime, she notices that her father stays longer than necessary in the bedroom of one of his patients, a young, beautiful girl who clearly wants more than a routine examination from her handsome doctor.

Meanwhile, Roz receives an ambiguous but ominous warning from a local voodoo witch named Elzora (Diahann Caroll). Although Louis is skeptical, Roz decides to keep her children inside the house, and that adds more strain to the nervous mood hanging around the family. Louis continues to be frequently absent, and everybody in the house, probably except Poe, knows that he does not always go outside for work. While Roz keeps being frustrated and agitated, Eve resents more being stuck in the house all day long, and, going through lots of changes as an adolescent girl with blossoming femininity, Cisely begins to clash with her mother as siding with her father, whom she has adored and worshiped.

The movie was the first feature film by Kasi Lemmons, whom you probably remember for her notable supporting roles in “The Silence of the Lambs” (1991) and “Candyman” (1992). Although she directed only one short film before moving onto the next step, she made quite an impressive film to admire and cherish for her superlative handling of mood and storytelling. Clearly evoking the atmosphere of Southern Gothic fictions including the works of Tennessee Williams, the landscapes of its bayou town look simultaneously gorgeous and mysterious on the screen. Cinematographer Amy Vincent gives us numerous beautiful shots which feel bright and colorful on the whole while also suggesting secret and darkness lurking near. Terence Blanchard’s jazzy orchestral score—one of the best works in his career—is lively at times when reflecting Eve’s innocence, but it is also darkly melodramatic as Eve enters a tricky emotional territory among her family members.

As the movie draws us more into its mesmerizing world, we come to accept its supernatural aspects mainly represented by Mozelle, who works as a psychic and is actually a real gifted one. When Harry unfortunately dies early just like her two previous husbands did, Mozelle is naturally devastated, and there is a brief moment when she sees the ghosts of her three dead husbands in a mirror. During her session with one customer in the dire need of help, she sees a series of striking black-and-white images as simply holding the customer’s hands, and then she gives the customer very specific details on how to find the customer’s missing family member.

With such a rich background like this, the main characters in the movie are brimming with personality and intensity reminiscent of the family drama films by Ingmar Bergman. While he is both a good father and a lousy husband, Louis frankly recognizes his deep personal flaw (“To a certain type of woman, I am a hero; I need to be a hero”), and he is sincere when he says his wife is the most beautiful woman he has ever seen. Although she feels hurt a lot by her husband’s infidelity, Roz still remembers how she came to marry him, and genuinely tries to keep her marriage and family intact while supported and consoled by her sister-in-law. In case of Eve, she is not your average cute child at all, and the shifting dynamic of her relationship with Cisely is one of the most compelling elements in the movie—especially after one night when Cisely goes downstairs to comfort her father not long after his quarrel with Roz.

Rather than providing a mere simple explanation of what exactly happened between Cisely and Louis during that night, the movie shows us instead how that very brief but indubitably devastating moment can be regarded and interpreted differently through two viewpoints. Regardless of which one is closer to the truth (which remains elusive to the end) it is clear to us that 1) that moment was bound to happen in one way or another considering what had happened up to that point and 2) its irreversible consequence is hurtful to both sides, while also leading to another irreversible consequence later in the story.

The movie has remained as a career high-point for Lemmons as well as her talented cast members. As the plucky heart of the film, Jurnee Smollett-Bell gives an unadorned performance packed with feisty innocence, and she and Meagan Good, who was actually considered for Smollett-Bell’s role during the long pre-production period of the movie, are convincing as their characters sway among strong emotions they cannot handle well. While Samuel L. Jackson is suave and charismatic in his understated performance, Lynn Whitfield is cool and elegant as his long-suffering wife, and Diahann Caroll is suitably spooky as a voodoo witch whose talent may be as real as Mozelle’s. 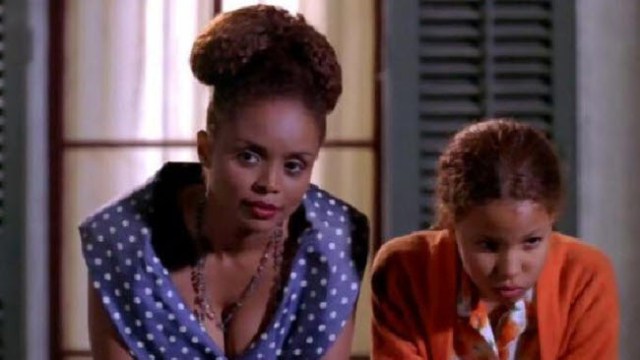 The best performance in the film comes from Debbi Morgan, who is unforgettable as a sad but passionate woman who can foretell many things about others but not herself and the men coming into her life. When Mozelle reminisces a tragic night when her lover confronted her first husband, we behold that incident inside in a big mirror along with Eve. The result is a hauntingly magical moment which powerfully echoes when Eve painfully faces the ramification of her impulsive action.

Although it received heaps of praises from critics and audiences when it was released in 1997, “Eve’s Bayou” has been rather obscure during last 20 years. I must confess that the movie drew my attention only after I came to learn that my late friend/mentor Roger Ebert picked it as the best film of 1997. Since I watched it for the first time in 2007, I have revisited it more than once, and I always found myself drawn to its story and characters every time I watch it. This is a small gem too good to be overlooked, and I assure you that you will not forget this haunting family drama once you watch it.