Happiness is a good father 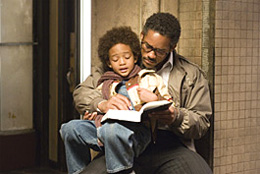 Every semester, I ask my students this one simple question. "Can you honestly say that you are happy?" In a class of 40 students, maybe only six will raise their hands. And that is pretty sad.

Are they plagued by those uncertainties of youth? Are they wondering if they will find a career, love, or meaning? Are they terrified by the threats of terrorist attacks, financial collapse, climate change and, well, the Apocalypse? Or, have they decided that the "American Dream" was not Thomas Jefferson's vision, but is instead a sappy Hollywood fantasy? Or, maybe they just hate my class? Sure.

In answering this question, Gabriele Muccino's "The Pursuit of Happyness," takes many usual directions that Hollywood movies take. At first, he seems to answer the question the way we would expect a Hollywood filmmaker to answer:

First and foremost, happiness is wealth. All the wealthy people in the movie are happy. All the other happy people are drugged; considering that they are in San Francisco, they are probably wealthy drug addicts. The only happy person that is neither wealthy, nor drugged, is a cute child (played by Jaden Smith, whose cuteness masks his precise acting). 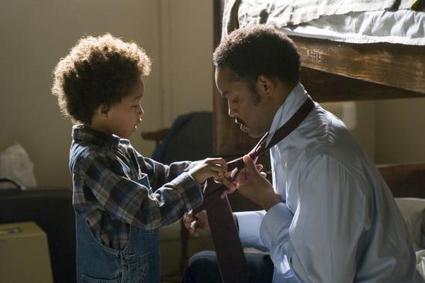 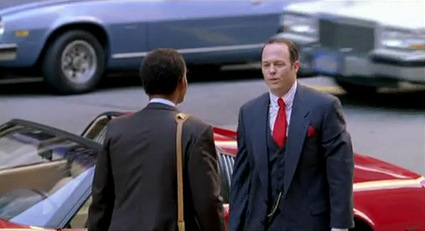 Second, the film takes place in the 1980s, so happiness is a friendly White Male with bad hair and foreign car. There are a few happy White women; most of these women have fixed smiles, blank eyes and permed hair. People of Color are angry, depressed, or broken. The one exception is Will Smith, who effortlessly carries almost every scene with charm and delicate strength. His Chris Gardner is trying his best to become happy, while everyone in his environment is breaking him down.

Third, happiness is a based-on-a-true-story underdog, who defeats all the odds, overcoming all obstacles. Every time his life gets hopeful, a piano starts its simple melody.

On the surface, this filim is a standard Hollywood tale. On the other hand, it is a movie about an American dream, directed by an Italian, starring an African American. Meaning, it is not a normal Hollywood movie. This American film by this Italian Director is somehow a mixture of Vittorio De Sica and Frank Capra. Somehow, we are handed an Italian Neorealist film in the body of a Jimmy Stewart classic. It is Neorealist in that everything that can be wrong happens to this man. It is Capra-esque in that, through the force of his determination, he reaches a happy ending.

Further, it is a rare, rare, rare story of a sympathetic, caring, intelligent, dignified father. How many examples of positive fathers in major Hollywood movies are there? You have sixty seconds to mention five. Until then, I should remind you that Hollywood fathers are often dimwitted, defeated, absent, and usually evil. The worst culprit is Disney. Look at all the Disney fathers of all those Disney Princesses. When my little daughter was very little, I started reading Disney Princess bedtime stories to her, only to discover that all the fathers were horrible. The fathers, true to Joseph Campbell's mythologies, were tyrannical obstacles that had to be fooled, faced or defeated. Thankfully, my daughter could not read. Thankfully, I had a good imagination. Nevertheless, the fatherhood in this film is so outstanding that it almost compensates for all the rest of the Darth Vaders in all the rest of Hollywood. 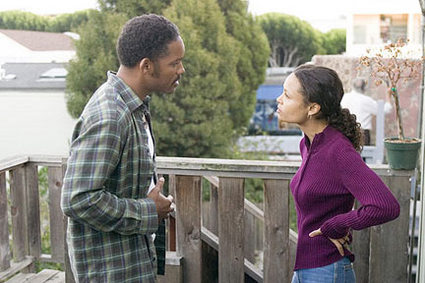 Now, I should caution my praise. This film's world is a world almost without women. Unfortunately, all the women that carry any substance are hopeless. Thandie Newton, in a razor sharp performance, is jaded, exhausted, and angry, and abandons her child. The lazy Day Care Center owner busies her children with old television shows. The trusted hippy betrays her trust. The Homeless Shelter manager, though polite, is a gatekeeper who keeps the gate closed. It seems that Hollywood's way to praise a father is to attack the mothers.

Further, I should mention that biopics always reveal their source material by presenting specific characters as heroes and specific characters as hyperbolic wretches. In "Notorious" (2009) (the story of rapper Biggie Smalls), Sean Puffy Combs - the film's producer - is a savior while Tupac Shakur is crazy. In "The Social Network" (2010), Eduardo Saverin (the author of the source text) is the most human, compassionate character in Mark Zuckerberg's world of socially inept nerds. In "The Pursuit of Happyness," Chris Gardner is full of depth and sympathies, while his wife is shallow, unpleasant, and always furious. Translation: Chris Gardner is telling us his version of his story.

Still, moving beyond all the specifics, this film is simply wonderful because it is simply wonderful. It is loaded with wonderful moments, especially those moments between father and son. If happiness is a good movie, then I am very happy. Perhaps my students should watch this movie.