Guillermo del Toro arrived late on Saturday morning at the Bing Theater with a typical Los Angeles excuse: the traffic. This is the second day he'd been at the Los Angeles County Museum of Art. Friday night, del Toro had been there for the beginning of the movie series screened in conjunction with the new exhibit, "Guillermo del Toro: At Home with Monsters."

The exhibit wasn't officially open to the public until Monday, August 1. But Friday night featured a showing of del Toro's "The Devil's Backbone" and the director signed over 700 books for fans who began lining up at 2 PM.

In this first museum retrospective of his work, around 500 objects have been taken from del Toro's Bleak House in the suburbs of Los Angeles. "I'm not a collector; I'm not a hoarder," del Toro stated during a presentation before the press preview on Saturday morning. "Because collectors know how the market is. They know how much everything is. They keep their comic books in little bags. They keep their toys in their boxes." Instead del Toro commented, he has a "promiscuous relationship" with his objects. The exhibit includes sculptures, paintings, prints, photographs, costumes, ancient artifacts, books, maquettes and films from his personal collection (including drawings from his notebooks) and 60 objects from LACMA's permanent collection.

According to Britt Salvesen, curator and department head of the Wallis Annenberg Photography Department and the Prints and Drawings department at LACMA, while LACMA couldn't take you through Bleak House, the exhibit attempts to give you something of the atmosphere of the house.

The exhibit is organized into eight thematic sections, beginning with "Childhood and Innocence." From there, the exhibit travels to "Victoriana," "Magic, Alchemy, and the Occult," "Movies, Comics, Pop Culture," "Frankenstein and Horror," "Freaks and Monsters" and "Death and Afterlife."

The exhibit is guarded by the Angel of Death ("Hellboy 2"). From there, we proceed to the faun from "Pan's Labyrinth" who stands with the mysterious stone from the same movie to the right and a monitor to the left which is playing scenes from that movie (a montage of "Childhood and Innocence in the Films of Guillermo del Toro").

In the section, "Childhood and Innocence," we note how many of del Toro's films center on children as protagonists, witnesses or victims. They are not insulated from fear, harm or even death. "In fairy tales, ogres and wolves ate children, and I think that it goes to the roots of storytelling, to have children as vulnerable," del Toro explained in the press notes. 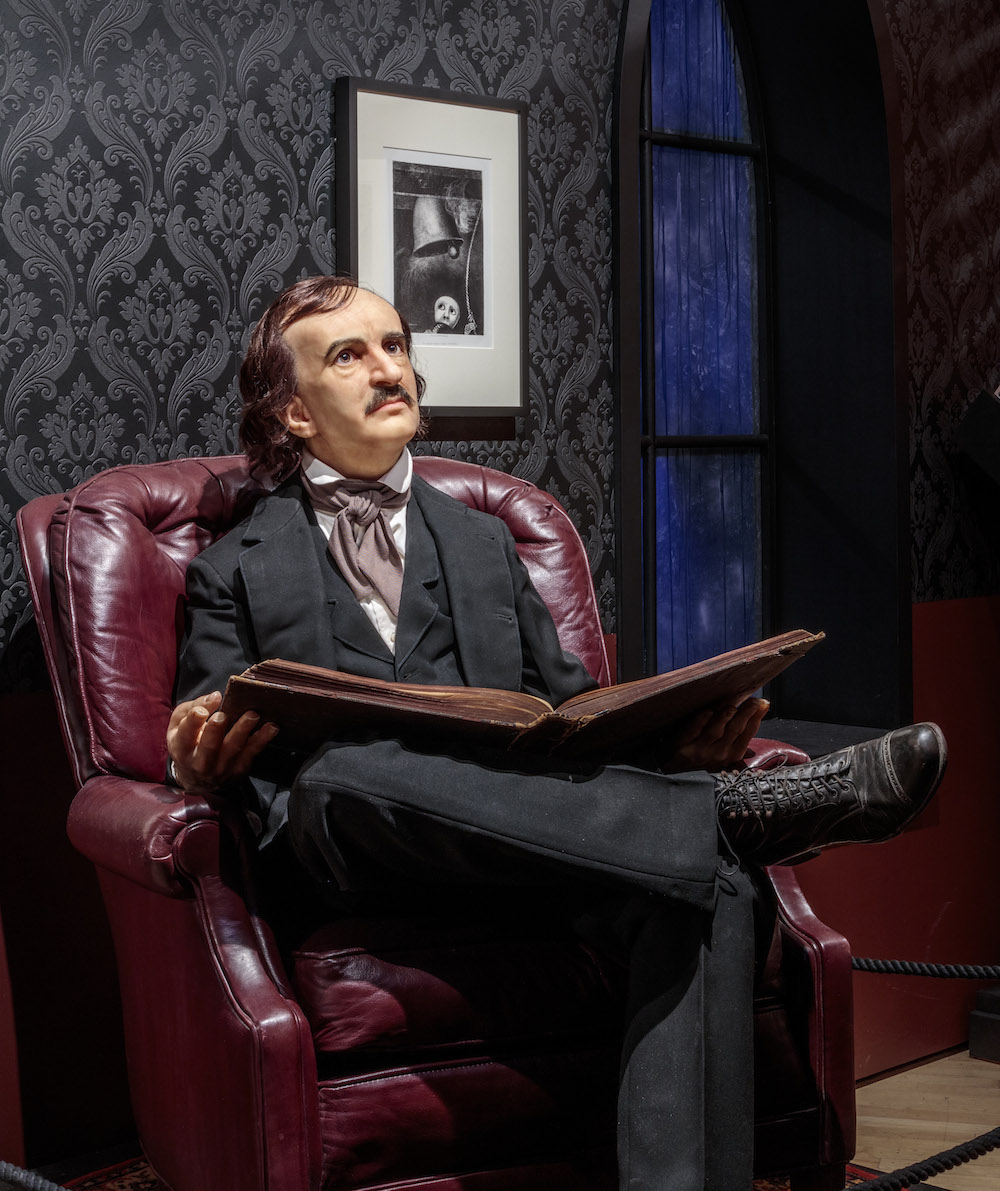 "Victoriana" is reflected in the name of the house itself. "Bleak House" is the name of a Charles Dickens' 1853 novel (serialized 1852-1853) about a long-running court case revolving around conflicting wills. Edgar Allan Poe inhabits this space as life-sized sculpture (pictured above). You'll also find Mexican artist Julio Ruelas is another influence as is the more contemporary Edward Gorey.

Del Toro's Bleak House is a place where every day can be a dark and stormy night, even in sunny, drought-stricken Southern California. Del Toro drew on his experiences as a special effects designer to create a rain room. The room features a rear-projected lightning effects and a false window spattered with silicone raindrops while a thunder soundtrack plays. This room is partially recreated in the exhibit.

This section also delves into the Victorian interest in science and del Toro's in insects, including a montage of insects in del Toro's films. Fans of 2015's "Crimson Peak" can also see costumes from that gothic romance.

"Magic, Alchemy and The Occult" relates to del Toro's vast library on magic, witchcraft and the occult and his fascination with American writer, H.P. Lovecraft. 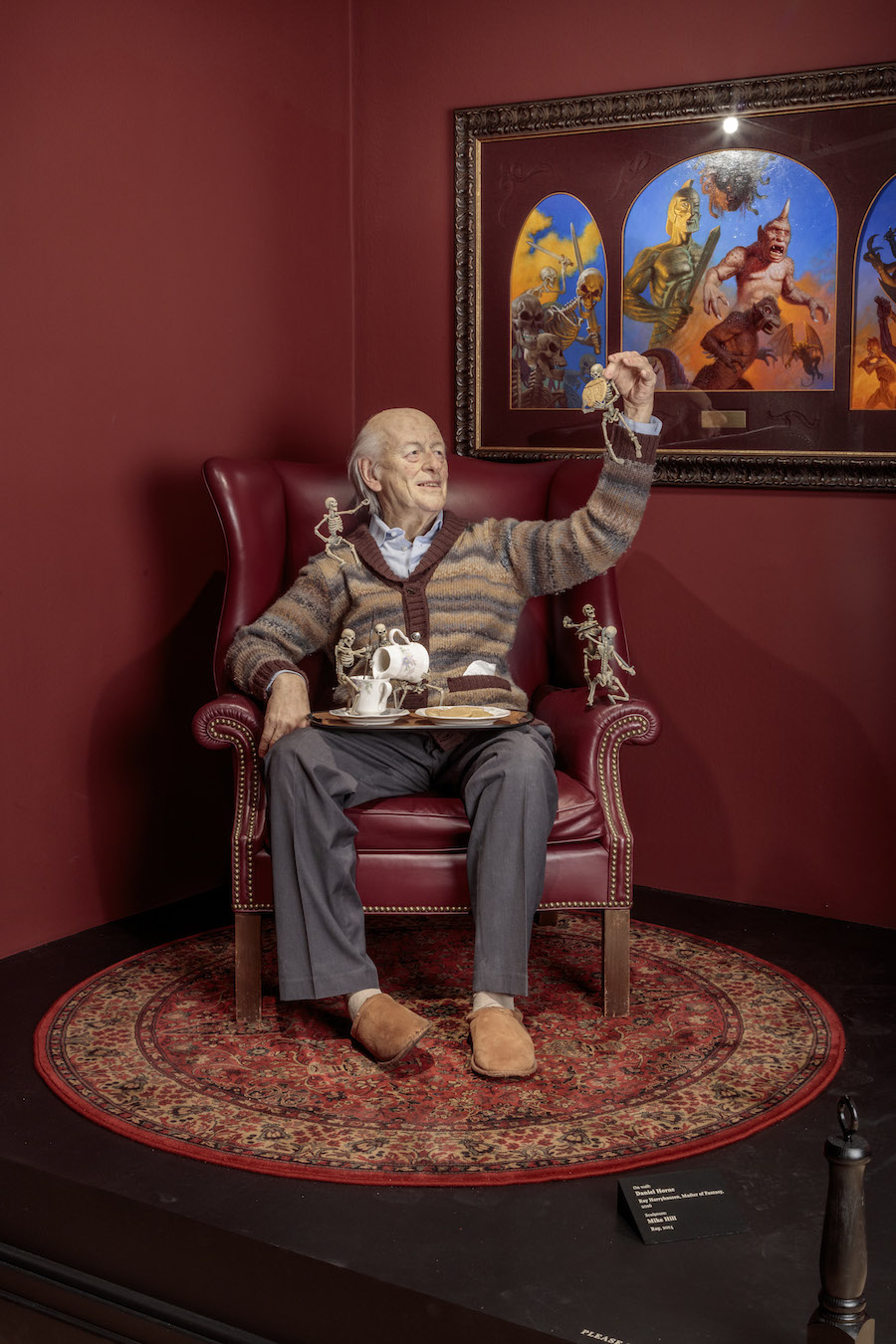 "Movies, Comics, Pop Culture" looks at del Toro's interest in B-movies and horror films and directors such as Alfred Hitchcock and Luis Buñuel. Del Toro was influenced by fine art and pop culture, which makes his directing a comic-book adaptation like "Hellboy" seem like a natural progression. A life-sized sculpture of stop-motion animator Ray Harryhausen (by Mike Hill, pictured above) considers a group of skeletons.

Del Toro might be known for "Hellboy," but he has a special fascination with Mary Shelley's 1818 novel, "Frankenstein; or, The Modern Prometheus." In Catholic school, del Toro was not popular, he was one of the marginalized students and identified with the outsider status of Frankenstein's creature.

Del Toro commented, "I saw in the creature of Frankenstein a beautiful innocent creature in a state of grace who was sacrificed."

From Frankenstein's creature to "Freaks and Monsters," the exhibition moves to the sideshow performers with two life-sized sculptures: the half-body boy, Johnny Eck (sculpted by Thomas Kuebler) and the pinhead, Schlitzie (also by Kuebler), both from Tod Browning's 1932 movie "Freaks."

There's also a montage of monsters from del Toro's films. During the press preview introduction, del Toro explained, "I found in these monsters a very moving essence of outsiderness that I identify with fully. Monsters free from the constraints of reality. They tell us something very deep about ourselves." Fans of his movies, "will see I adore monsters." He explained, "Monsters do not pretend to be something else."

On the other hand, del Toro continued, "Humans are frequently false" and trapped by "a series of fantasies that we accept socially that are absolutely terrifying" based on geography, gender and race. "These are accepted fictions that separate us from each other." Monsters are "the patron saints of otherness." 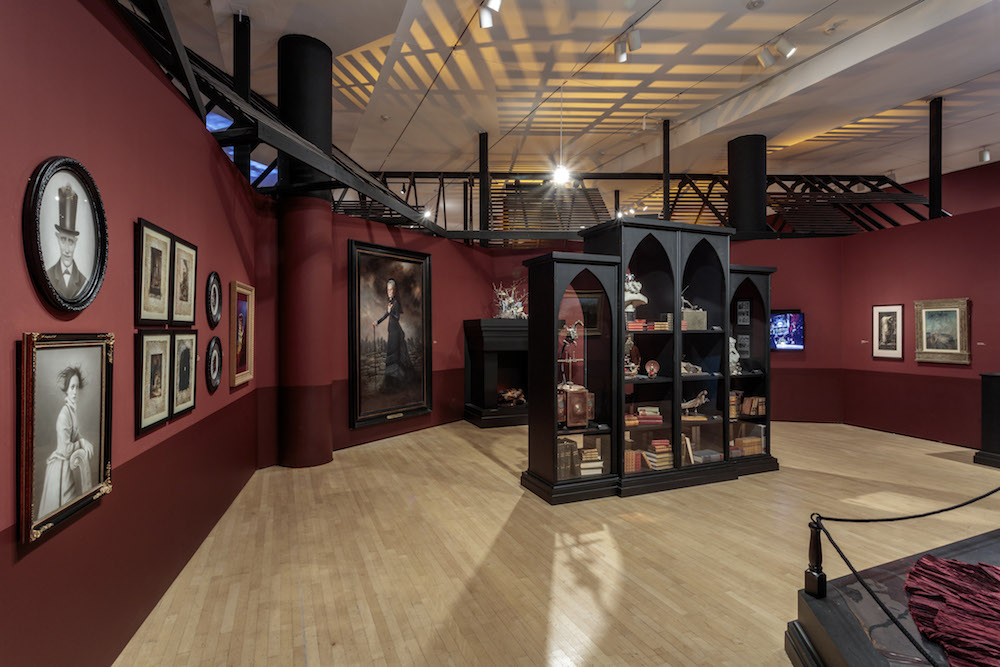 "Death and the Afterlife" was much in the mind of del Toro as a child raised in Mexico during the 1960s and 1970s, brewing from seeing corpses on the streets and being raised Catholic. Death and resurrection is the topic of the montage for this section.

Places are also the subject of another montage in the exhibit and his place in Los Angeles, and the history of California and the current history making events in the United States seemed very much on del Toro's mind. Toward the end of his remarks to the press, del Toro commented, "It is very important for me to be here, as a Mexican." He explained, “The real monsters in our lives are in fancy tailored suits. There’s nothing more scary than people that are profoundly ignorant and profoundly certain. They always go together.” Instead, del Toro wanted people to realize he represents Mexico and "We are a rich and diverse community." 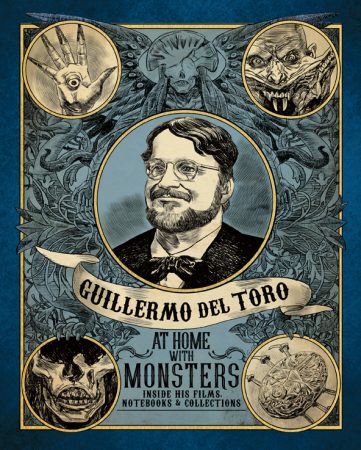 The exhibit's catalogue, "Guillermo del Toro: At Home with Monsters: Inside his Films, Notebooks, and Collections," features photos taken from inside of Bleak House mixed with stills from his movies. Contributing to the Insight Editions' publication are Salvesen as well as Art Gallery of Ontario's manager of publishing, Jim Shedden; Paul Koudounaris, an author with a PhD in art history who specializes in the visual culture of death; Keith McDonald, head of Programme for Media and Film Studies at York St. John University, UK; Roger Clark, senior lecturer in Literature Studies at York St. John University (co-author with McDonald of "Guillermo del Toro: Film as Alchemic Art") and Guy Davis, freelance concept designer, illustrator and storyboard artist who frequently collaborates with del Toro. The 152-page hardcover book ($29.99) can be purchased at the LACMA bookstore or online at LACMA.org or through Insight Editions.

In October and November, six more movies by del Toro will be screened at LACMA's Bing Theater. The film program “Fuel for Nightmares: A Curated Series of Guillermo del Toro’s Inspirations, Influences and Favorite Films,” will begin screening on Tuesday, August 2. This program includes "Jane Eyre," "The Young and the Damned" (Los olividados), "Kwaidan" and, of course, "The Bride of Frankenstein."

The exhibit opened on August 1, 2016 and after closing on November 27, the exhibit will travel to the Minneapolis Institute of Art (February 26 - May 21, 2017) and lastly to the Art Gallery of Ontario (September 30, 2017 to January 7, 2018) in Canada. Each exhibit will be a little different, including objects from the home institute and there is a possibility that other venues will host this exhibit.