Deadly strangers on a train 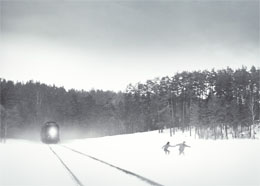 "Transsiberian" is a Hitchcockian thriller decorated with icy wintry landscapes. It sets its tone right at the beginning, carefully developing an unstable feeling while loading the story. It steadily amplifies a sense of dread within its closed space. We sense something terrible will happen, and it does happen, but we are surprised because we suddenly find the movie rapidly accelerating on an unexpected course--and it never stops until it reaches to its finale literally approaching toward it from the opposite side.

Its ominous tone is quickly established during the brief opening sequence in Vladivostok, a port city in the Far East region of Russia. On a bright, cold day, a man is found murdered and frozen in one of the boats at the port. A middle-aged detective arrives in to check the crime scene. As soon as he looks around the cabin of the boat, he perceives what happened and makes a quick conclusion.

Then the movie places its focus on an ordinary American couple who have just finished fruitful volunteer work at a church mission in China. They can go to Moscow by plane, but Roy (Woody Harrelson) wants to have a special time with his wife Jessie (Emily Mortimer), so they choose the Transsiberian Express, which goes from Beijing to Moscow during its 7-day journey across the vast landscape of Siberia. They have a rocky start thanks to many uncomfortable things, including a hostile conductress and a narrow cabin (the movie is certainly not a good promotional film for the Transsiberian railway), but at least they get the usual pleasures of a train trip. They enjoy the snowy scenery outside (the temperature is below -20℃/-4℉), and they have a pretty good time with the strangers on the train who can speak English and tell them a lot about their country ("If you want proof about America, you take a book. You want proof about Russia, take shovel."). 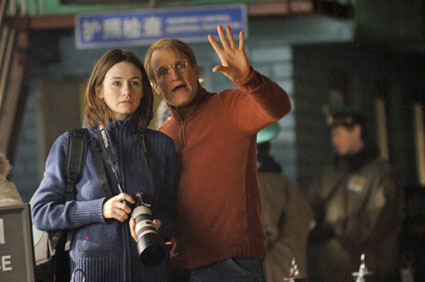 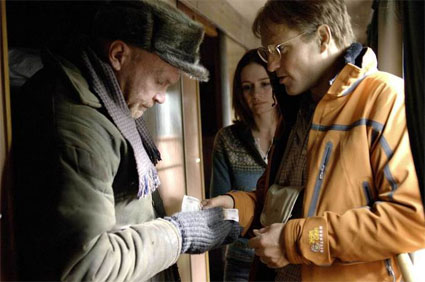 They meet Carlos (Eduardo Noriega) and his young girlfriend Abby (Kate Mara--she's an elder sister of Rooney Mara). They don't look like easy people to get along with. Although he gives Roy and Jessie useful advice on how to make a new passport look less suspicious to custom officials, Noriega's smarmy performance clearly indicates that Carlos is a bad dude she should not trust, and Mara's detached face, as icy and white as Siberian snow, draws more suspicion about them. Are they really just a young couple with some money for traveling here and there around the world? Or...

Instead of hurriedly pushing itself into thriller mode, the director Brad Anderson's screenplay polishes its characters through casual but uneasy interactions between these two couples during its patient set-up process, and we get to know more about them. Roy, a decent and likable guy with boyish interest on trains, has no problem with spending time with Carlos and Abby. He even goes around some abandoned coal trains alone with Carlos while having not the slightest idea about what Carlos may be capable of. I wonder--what was he thinking when a blunt instrument came handy to him?

Unlike her gullible husband, Jessie instinctively recognizes what kind of people Carlos and Abby are, for they evoke the wild messy past she has been trying to put behind her. Now sober and clean, she is grateful to Roy for having been a solid ground for her to settle on since their chance encounter and subsequent marriage, and she looks happy and stable to be with him, but now a dark, seductive stranger suddenly appears in front of her along with a girl who may not be different from her younger self. Carlos sees through Jessie just like she did, and he insidiously tempts her former self remaining inside her while Roy being innocently oblivious about what's going on between them. 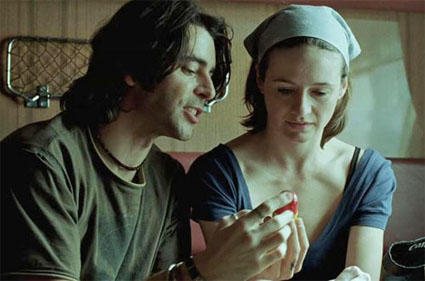 And then something happens. After a stop at the station in Irkutsk, Roy doesn't get back on the train, so Jessie finds herself alone among strangers. She gets off the train at the next station to wait for Roy. So do Carlos and Abby. Because of Roy's absence, the subtle tension between Jessie and Carlos is increased more than before, while Abby seems to be more occupied with something she doesn't want to talk about.

I should be reticent about what you will get during and after this uncomfortable circumstance, but let's say the trouble Jessie gets herself into is not far from the nightmarish situations you can imagine as a tourist in a foreign country. Some Russian people can be cordial to you, but others can be are bitter and harsh as their depressing world ("In Russia now we say there are only two kinds people, those who leave in private jet, and those who leave in coffin"). The local police look threatening and brutish rather than nice and dependable. The fear of the police, a typical subject in Hitchcock's thrillers, is more intensified in Jessie when her husband safely comes back to her with a narcotics detective as their new cabin mate. She becomes more panicked because of her big trouble involving drug trafficking, and she finds herself more trapped as she tries more to wriggle out of the detective's attention.

Detective Grinko (Ben Kingsley), who is the very detective we saw in the opening scene, looks like a courteous old man more helpful than Carlos and Abby, but Jessie gradually feels that she is being watched and cornered by him. He has some interest in Carlos and Abby, and he knows something doesn't fit. As she feels more pressured minute by minute, he gives her a stern warning/advice: "In Russia, we have expression. 'With lies, you may go ahead in the world, but you may never go back.' Do you understand this, Jessie?" 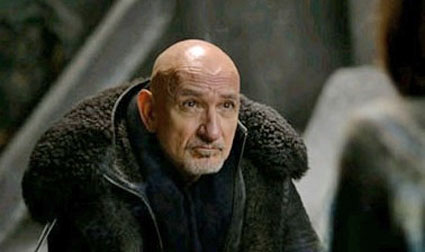 The director/writer Brad Anderson drew lots of attention from me and South Korean audiences through his previous film "The Machinist" (2004). Its story was essentially a run-of-the-mill psychological thriller drama with a familiar twist, but the movie did a better job than we expected thanks to Christian Bale's frighteningly skeletal performance and Anderson's competent direction.

In the case of "Transsiberian", which was inspired by his own trip on the Transsiberian Express, Anderson has made an engrossing thriller well supported by its impressive atmosphere and his deft handling of suspense. Mainly shot in the locations in Lithuania, the icy wintry atmosphere is prevalent throughout the film, and its white bleakness works effectively as the background for suspense, dread, and desperation, as shown in one silent but disturbing scene involving two main characters and an abandoned Orthodox church in the remote snowy wilderness. 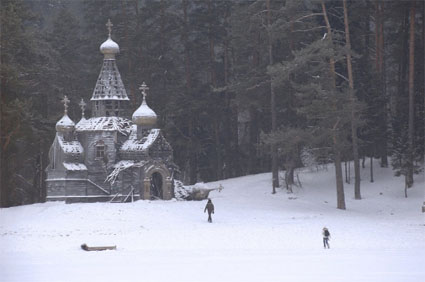 The movie also makes good use of the train as its main stage. It looks like a safe place for the characters for a while, and then it contributes to the intense claustrophobic feelings during the second half of the movie, through its narrow space with few hiding places. Later, we get a jaw-dropping moment reminiscent of the climax of Alfred Hitchcock's classic thriller film "The Lady Vanishes" (1938); Jessie and Roy realize something is going terribly wrong for them on the train--and it becomes quite possible that they will not be able to arrive in Moscow.

As a movie depending a lot on suspense rather than action, it naturally requires good performances to hold our attention, and the actors deliver what's required. Emily Mortimer is an ideal choice for a neurotic heroine under pressure; the more pressured she gets, the more fabulously her performance trembles on the edge. Terrified of what will possibly happen to her, and scared of what her husband will think of her, Jessie stubbornly and maddeningly sticks to her lie despite Grinko's warning, but it results in more troubles coming to her and her husband. Even at the most hopeless moment, she desperately clings to the lie, and Mortimer is terrific as her character is crumbling down under unbearable pressure. 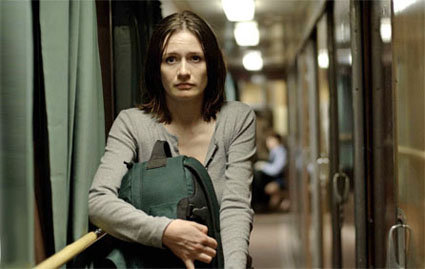 Playing a normal guy was the last thing I could imagine from Woody Harrelson after to his startling turn in "Natural Born Killers" (1994), but Harrelson surprised me in this film as an average husband whose personal interest turns out to be very useful when he and his wife must escape as soon as possible. It's unclear about how much he comes to learn about her through their perilous journey, but he's not a guy who easily changes his thoughts about the woman he loves. Eduardo Noriega is odious and ingratiating as a man who might be worse than he looks, Kate Mara holds her cards behind her back well, and Ben Kingsley imbues his archetypal character with shady integrity. I especially liked a nice small touch involving his wristwatch, although it looks a little too symbolic during a crucial moment around the ending. 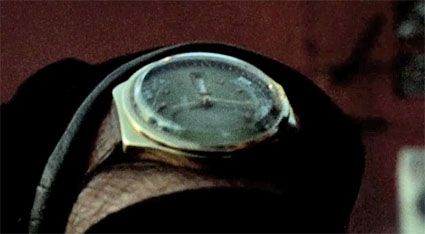 When I watched the movie in late 2008 after hearing good things about it, I was a little disappointed during its first half, but, once it got tighter, I could see how diligently it prepared for its thrills and suspense. There are few action scenes in the film, but I appreciated them for actually serving the story for good dramatic effect. This is a smart and taut thriller filled with cold intensity and suspenseful ambience, and it is a very recommendable one especially when it gets cold on a winter night.