In July 2012, Roger wrote about viewing “Spirited Away” for a third time and how he was then “struck by a quality between generosity and love.” It was during that viewing he “began to focus on the elements in the picture that didn’t need to be there.” Recently, I was re-reading that essay as I was watching the Blu-ray of "Spirited Away" three times (Japanese, English dub and back to Japanese) back-to-back-to-back.

Suddenly, I was struck by the visual cues Hayao Miyazaki presents in the beginning of the film that set up the character of Chihiro before she becomes Sen. I called it my A-ha moment.

Chihiro has been characterized as whiny, but I think if you understand her situation and contrast her intuitiveness with her parents' obliviousness, she seems less so. In the real world before she becomes Sen, there is no doubt she is a bit sullen. Not unlike Riley in Pixar's "Inside Out," she's unhappy with being forced to move away from her friends. Her friends have given her a nice bouquet. If there are five stages of loss and grief (denial/isolation, anger, bargaining, depression and acceptance), then Chihiro is at the end of denial, and her comment about how unfortunate it is to get her first bouquet as a farewell gift indicates she is entering anger. 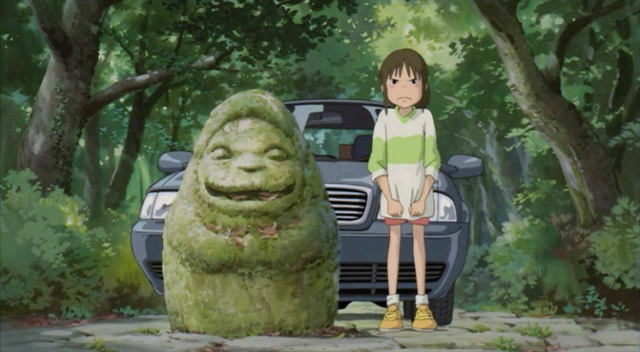 When her father, Akio, takes the rural street that leads them to what looks like an old unused amusement park, Chihiro picks up cues that her parents do not. She's troubled and a bit frightened by the moss-covered stone statues. Something about them makes her anxious. In this respect, she is not unlike Lucy Pevensie from "The Chronicles of Narnia." Narnia is closed off from children when they reach a certain age in the real world (until death returns Lucy, Edmund, Peter, Digory and Polly). Lucy is the most intuitive of the four Pevensies although she too has a moment of envy that signals she won't be able to return. Chihiro at ten is still more child than adult and thus more intuitive than her parents.

If we consider that Chihiro senses something is wrong, then her pleading with her parents not to enter the tunnel seem less whiny. She becomes Cassandra, a prophet whose warnings go unheeded. Out on the other side, there is a grass meadow and more stone statues. Chihiro's anxiety over the statues isn't the last bit of foreshadowing that Miyazaki provides visually.

In the following scenes, Miyazaki exploits the visual nature of the Japanese language. Japanese is not like English. Instead of an alphabet, it uses two syllabary systems and Chinese characters. The syllabary systems, hiragana and katakana, originated from Chinese characters, but are used to represent syllables. Hiragana is used for post-positionals and parts of words not fully expressed by Chinese characters (such as inflections for verbs and adjectives). Katakana is used for foreign words and onomatopoeia. Chinese characters often symbolize concrete things. Japanese poetry is filled with wordplay and the following scenes are filled with visual cues and words that can have double meanings. 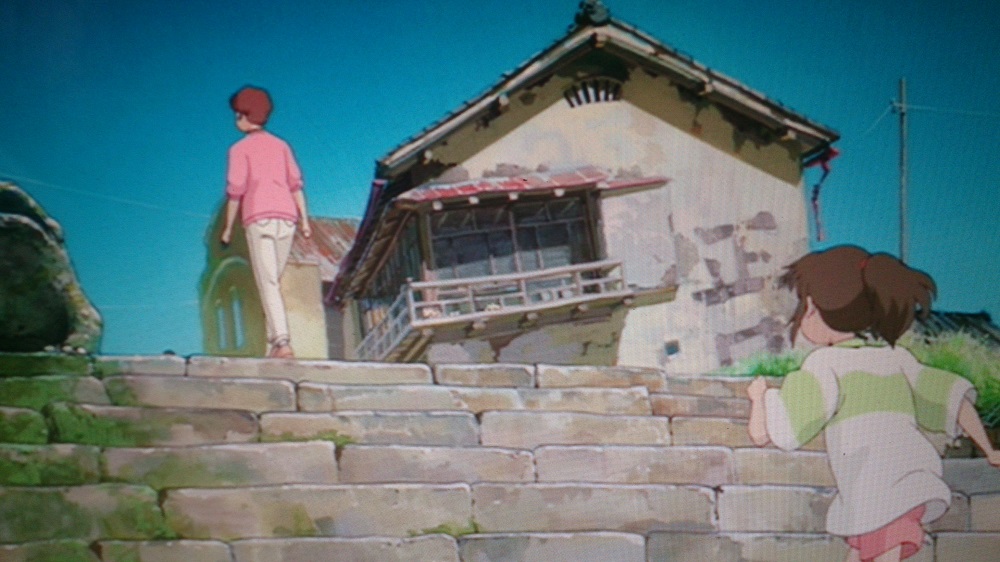 On the first building we see an incomplete phrase. Alone the character 正 would be read "sho" or "sei" and means right, righteous, justice and genuine, but 正 also suggests 正しい, meaning correct, right, honest and truthful. There's more signs on the shops in the main road. At first casual glance as we go by, it does seem like they are all part of advertising for restaurants, but on closer examination, that proves not to be true. 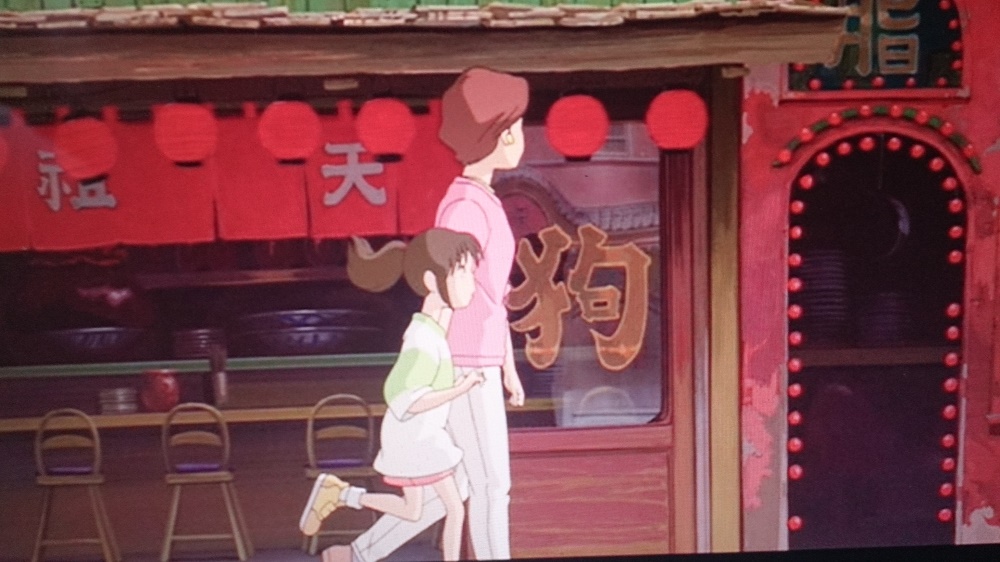 When we get to the main street we see the characters 市場 for market (ichiba) and the word 自由 (jiyuu) for freedom. Then there are some disquieting Chinese characters. The mother says that all the places are restaurants. When you see 天 float by you might think 天ぷら (for tempura), but actually the characters are: 天祖 (tensoo) for the ancestral goddess of the sun, Amaterasu. In one frame we see only 天狗 (tengu), with "ten" above and "gu" below.  The character 狗 means dog, but can be used for dog meat (狗肉）which is not commonly eaten in Japan (and could suggest the homophone 苦肉 or "kuniku," which literally means bitter meat meaning a countermeasure that requires personal sacrifice. The character usually used for dog is 犬. Tengu, however, or heavenly dog, a legendary creature or supernatural being (yookai) that can be either harbingers of war or protective spirits of the mountains and forests.

Floating at the corner of one building is 骨 which means bone and it could be a restaurant term as in the creamy broth: 豚骨 (tonkotsu) which is literally pig bone. Yet bone or "hone" is used in idiomatic phrases such as hone-nashi meaning to lack moral backbone. 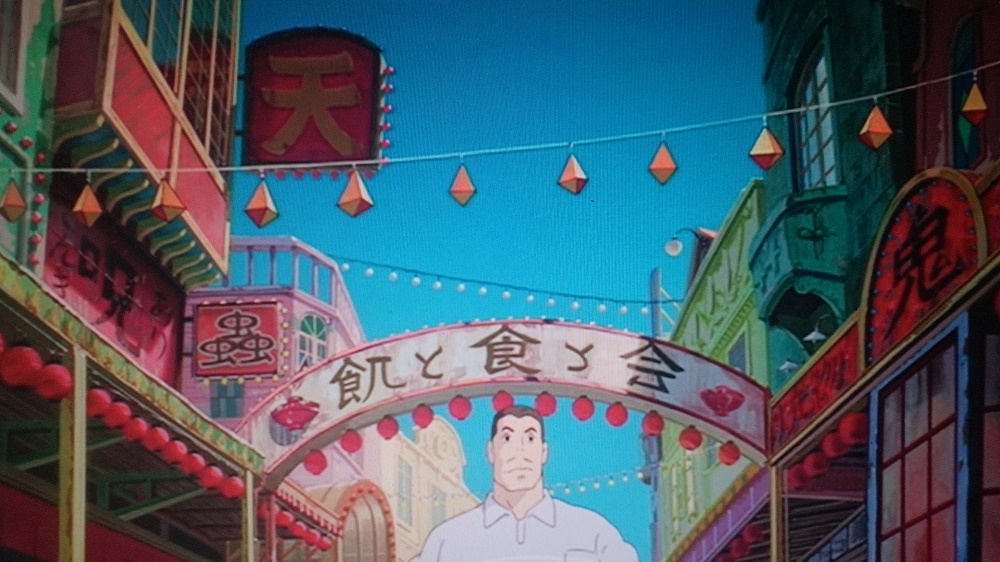 Some of the Chinese characters are just a little off, enough to make you think. Most obviously is the one syllabary and one Chinese character that are written backwards when we look above at the arch. The characters are 飢と食と会 which seem to substitute for 飢える (ueru, to starve), 食べる(taberu, to eat)  and 会う(au, to meet). The と signifies "and." It should read eat ( 食べる), drink (飲む) and meet (会う) or something like that, but the last two symbols are backwards on either side. Looking at these, perhaps Chihiro senses something is wrong. 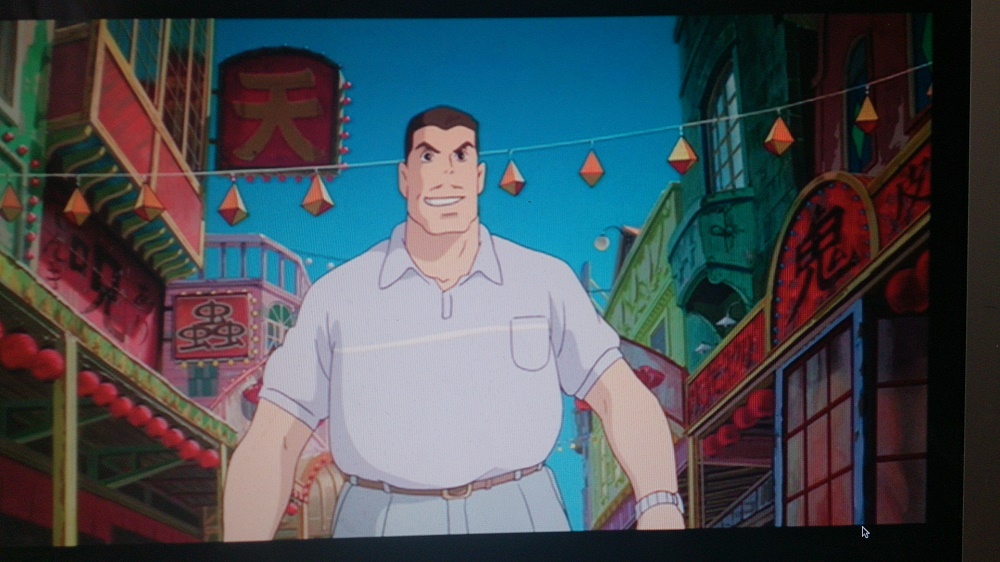 Further, right before the father Akio turns down a small alleyway, he is framed by the characters for heaven on the left side of the screen and on the right side for devil. Soon after, what he sees is, especially in Japan, a supernaturally large buffet. While he assures Chihiro that he can pay for the feast and we remember he did have that foreign car, a Japanese person might be quickly calculating in their minds the exorbitant cost. 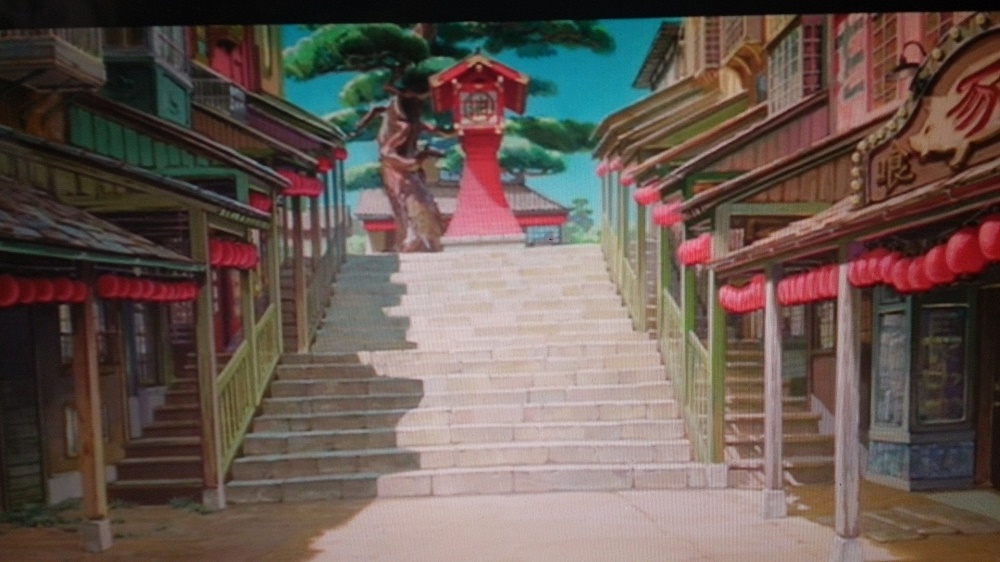 Chihiro briefly leaves her parents and above her head flashes a sign that reminds us both of family, pigs and death. The character 冢 (tsuka) means hill or mound. Yet this is not the preferred character which would be 塚 (also read tsuka). The small cross represents ground or earth. Without that radical, 冢 is only one stroke different than the word for house 家 (uchi) which is the same one used for the Chinese character combination that means family 家族 (kazoku). The significance here is that pig (豚 or buta) under a roof represents house/home 家. That quick flash of this character gives the suggestion of pig and family. Yet it is also like bone (骨 or hone) associated with death as in grave (冢穴).

This character 冢 (tsuka) seems to foreshadow the transformation of her parents into pigs and her journey to figure out how to save her parents from death. The more she sees of this amusement park, the more frightened she becomes. There's an expensive public bathhouse at the end of the pathway and all the lamps seems to be associated with it, but where are the people? Where are the vacationers, the retired old people and the middle-aged women on retreat? Where are the vendors, pushing you to buy anything and everything because everyone must return home with presents (omiyage) for their neighbors, co-workers and relatives. Anyone who has been on the trail to great temples or been on a hot springs tour will know that for such a grand feast and for such a splendid public bathhouse, these scenes are much too quiet.

Chihiro runs back, perhaps to warn her parents only to find her parents have been transformed into hogs.

The movie is called "Sen to Chihiro no Kamikakushi" (千と千尋の神隠し). Sen means a thousand, but the pronunciation of the character can change to "chi" as it does in the name Chihiro. The "hiro" in Chihiro means to ask questions. Kamikakushi means spirited away with kami meaning spirit or god and kakushi meaning hidden. So perhaps we can translate the title as "Sen and the Mysterious Disappearance of Chihiro."

"Spirited Away" was released in in July 2001. Most Studio Ghibli movies were released in July, and in Japan, I feel this is especially significant in the case of "Spirited Away" and "When Marnie Was There" because it is the Obon season, a time when Japanese believe the spirits of their ancestors walk the earth and return to their furusato (hometown). That time period (mid-July to August) is, much like New Year's week, a hard time to get things done in Japan due to the various celebrations and the people who leave on vacation. We do learn later in the movie that the character on the first building, 正, is part of a combination 正月 which we translate to mean New Year.

Although Roger didn't read or speak Japanese, he saw the rich detail. This is one of those movies worthy of a frame-by-frame analysis. For the people who read Japanese, some of what I have written above may have been intuitively realized. There are other things I still wonder about such as the prominence of the Japanese syllables of “me” and “yu” throughout. I’ve read one theory that put together into “yume” it means “dream.” I’d enjoy hearing other people’s thoughts, theories and feelings about “Spirited Away.”