Bullhead: A man running from his past 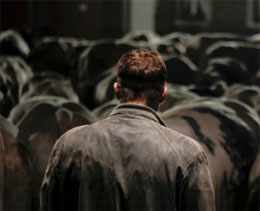 He wants to forget about it, but it is impossible for him to get away from it, because that has driven him to be who he is now. As the opening narration suggests, even if it is buried below and everyone including him is silent about that as if nothing ever had happened, it never goes away. It remains beneath the surface, and it is bound to be brought up again in one way or another, and there is no way of release possible for him.

Jacky Vanmarsenile (Matthias Shoenearts), a young cattle farmer who is the moody hero of Belgian film "Bullhead", does not look like a nice guy. When we see him for the first time after the opening narration scene, he approaches one of his neighbor farmers and forces him to sell his cattle only to the farm managed by Jacky's uncle. With his imposing physique and threatening attitude, it is not easy to say no to Jacky, whose family seems to have some influence around Limburg, Belgium.

And that is not the only dirty activity in his stock raising business. With the assistance from a crooked veterinarian (Frank Lammers), he and his family use growth hormones and other illegal substances for fattening their cattle in a shorter time for more meat and more money. They have been doing this for a long time; only difference is they use the substances which are less likely to be detected by the authorities than before.

A big irony is that his behaviors are not so different from those of a bull and he has also been 'fattening' himself. Considering his bulky appearance, it is not surprising to see him routinely taking several pills and injecting the illegal substances to his own body in his private room, which has a small refrigerator full of the pills and vials always ready for him. After that, he does some shadowboxing as a ritual, but his disaffected face never looks relaxed, and there is something not right about him. He is particularly uncomfortable in front of the possibility of sex. Even when others just casually talk about or suggest that, he can't stand it and exits the scene with raging temper. 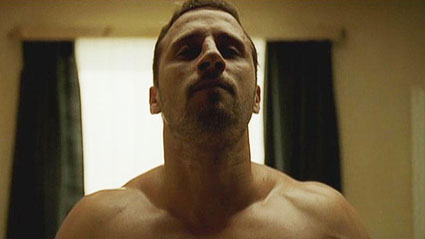 While it goes without saying that he is a substance abuser, his problem is deeper than that. Through the mediation by his veterinarian, Jacky gets involved with the crime organization in West Flanders. At the first meeting with the boss Marc Decuyper (Sam Louwyck) and his associates, Jacky comes across his old childhood friend Diederik (Jeroen Perceval). It is not Diederik's intention, but his presence immediately opens an old wound in the past Jacky has avoided--as one brief shot of a big glass door opening literally implies. He becomes agitated and furious. And his instinct tells him this is not a good deal.

What happened to them? After their meeting, the movie instantly looks back at their childhood in 20 years ago, when they began to have interest in girls and sex like any boys in their age. Jacky had some crush on the girl whose father is a powerful mob figure in the town their fathers dealt with for their business, but, on one day, he was unfortunately targeted by her cruel, mentally-disturbed teenager brother, and an horrific incident happened consequently. The movie refrains itself from showing the details of this gut-wrenching moment, but, thanks to the good performances from young child actors, you can feel how much it traumatized Jacky both physically and psychologically. I assure you, it will certainly make a certain group of the audiences like me wince.

Meanwhile, Jacky's intuition about the deal turns out to be right. An undercover cop investigating hormone trafficking is killed, and the police are determined to find who was behind the murder. They know Decuyper is somehow associated with this murder, so, along with others including a duo of hapless small-time criminals who is given a job beyond their intelligence, Jacky is logically drawn to their attention.

The director/writer Michael R. Roskam (this is his first feature film) makes a slow-burning crime drama based on mood and characters rather than action. The story seems to meander at the beginning, and we do not get a lot of information about the whole picture of the underworld in which the characters inhabit, but we can see that the movie patiently positions the supporting characters around Jacky like spreading the net around him during the first half. Pushed by them directly or indirectly, Jacky is cornered into the finale waiting for him, and, thanks to cinematographer Nicolas Karakatsanis, who provides the gloomy atmosphere over the wide green fields with fatalistic grey undertone, what eventually happens is accepted as something fateful rather than predictable. 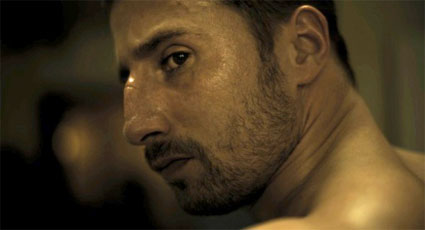 Matthias Schoenaerts, who gained 27-kg (around 60 pounds) for his role (no, he did not use steroids), is utterly unforgettable in the film. His quiet seething intensity slowly reveals a disturbed man grumbling behind his big body; he goes to extremes to forget all about his trauma, but none of his pain or complexes disappears. Even one word he hears or one small casual behavior he glimpses increases his anxiety about his manhood, and his hurtful memories continues to torment him. He remembers how helpless he was. He also remembers how helpless his father was about what happened to him at that time. (A brief moment in the film shows that he is now more helpless than before). At one point, he attempts to settle the score with a guy responsible for his misery, but he is frustrated to see that there is no point in beating a mad dog.

He also tries to pursue the girl he liked during his childhood and has been obsessed with, though he has never met her again since that incident. Much to his disappointment, Lucia (Jeanne Dandoy) does not recognize him when he comes to her perfume shop, but after meeting him again at the nightclub (after he secretly follows her to that place), she realizes who he is. Remembering that 'accident', she feels sorry for him, but she recoils from him when she learns of the dark, monstrous side beneath his introverted attitude. During the moment when he scares her because he wants to face her for the last time, you may recall that strange relationship between a beautiful woman and a beastly man who loves her in Claude Chabrol's "Le Boucher" (1970); in this case, the impossibility of their relationship is painfully far clearer to both of them.

In contrast, though he does not look trustworthy at first, Diederik turns out to be a truer friend than we expected. The supporting performers surrounding Schoenaerts give nice performances, and Jeroen Perceval is especially good as a man who is forced to juggle lots of balls in the air while trying to maintaining his position in safety. He has to do whatever his boss orders, so he deals with his old friend still angry about him. He is also an informer to the police, so he must give them any valuable information about the murder, while trying to save his unfortunate friend out of the imminent trouble to come.

I especially enjoy the way the movie deals with the interactions between Diederik and two detectives, Eva and Antony (Barbara Sarafian and Tibo Vandenborre). As a 'bad cop', Eva does not tolerate any bullshit from Diederik with her abrasive no-nonsense attitude; as a 'good cop'. Antony cajoles Diederik with homosexual appeal to get anything useful from him. They are smart enough to see what's going on around the people they watch on, but, as Eva says to her partner with resignation near the finale, they are too late for preventing what will eventually happen.

"Bullhead" was Belgium's official submission for Best Foreign Language Film Oscar in last year, instead of the Dardenne brothers' "The Kid with a Bike"(2011), which could have been a nice alternative choice (I like them both, by the way). I did not expect much, but, to my surprise, the movie succeeded in not only being included in the final list but also getting nominated recently. I do not think it will win, but it deserves its nomination none the less.

Starting like a crime thriller at first, the movie ultimately reveals itself as a multi-layered drama about a tragic man shaped by his social environment and his destructive complex associated with masculinity. Its last shot, one of few bright spots in the film, is connected in my mind with what I observed from Mike Tyson in James Toback's documentary "Tyson" (2008). Like Tyson did, Jacky transforms himself into a far more intimidating self to hide his vulnerable side and painful memory - but there still remains an angry damaged boy inside his bulky armor even when he wields his fists in the air.

In the end, what has been repressed for years and years without any possible way of ventilation is finally exploded along with desperate brutality. That happens in a small, tight space for more or less than a minute, but the result is a cri de cœur both brutal and harrowing thanks to Roskam's steady build-up process and Schoenaerts' gritty performance. No matter how much he erupts with anguish and fury, he will never get out of the route set for him, like a bull to the slaughter.