And life goes on as planned 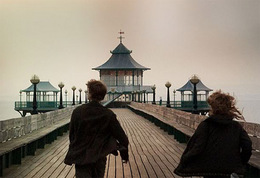 Whenever I saw a plastic bag, a mixed feeling of benevolence and mild annoyance used to bubble up within me. When not neatly stacked by the cashier in a store or filled with stuff, they were usually flapping in the wind making unnecessary noises or worse, trailing in the gutter or sidewalk, being useless. Their life as intended was over, but they seemed oblivious.

These feeling changed after I first read the novel "Never Let Me Go" by Kazuo Ishiguro, which in its almost-casual prose and easy pace, threaded me through the legendary grounds of Hailsham and the damp English countryside with Ruth, Tommy, and Kathy. Along the way I sat beside the girls while they bonded, and stood beside the boys while they yelled. Throughout their lives, I got to know these three people, and they became real to me. By the time the book completed, so had they, but I was not.

I did not want it to end.

Thus I put it away, and avoided seeing the film adaptation of the same name, "Never Let Me Go" (2010), directed by Mark Romanek, for some time. Eventually curiosity took over, and I finally watched the movie. From start to finish, it was like no time had passed at all, and I was once again absorbed into the world of Hailsham, those children, and their brief, hurried lives.

Hailsham is a special place, built for special people. As a boarding school, it provides its students with everything they need to obtain happiness: food, shelter, education, safety, order. Especially order. Children don't require much, and they mold easily into their environments. They take in everything straight through clear, non-cynical eyes, and believe that things are exactly as told, that they are exactly as they seem.

Of course, that is a lie. Because adults are running Hailsham, and their worlds can no longer afford to be as idyllic as those of the children they have come to bear.

And life goes on as planned. For Ruth (Keira Knightley), Tommy (Andrew Garfield) and Kathy (Carey Mulligan), a smooth trajectory has been laid out from birth to completion. They are special. They are encouraged to draw, to produce art, to be healthy. None of them question these requests. However, questions do sprout up...about each other, those natural curiosities of the opposite sex and the innate awareness of their differences. Kathy is fascinated by Tommy, who despite his temperamental flaws, has heart and thoughts. She watches him, digests him, one day approaches him with an unexpected gentle touch, and their lives intersected. Tommy, surprised by such kindness, returns the favor the only way a boy knows how: he buys her a gift, which Kathy would treasure at unexpected moments later on. 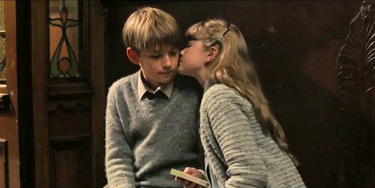 Throughout all this Ruth watches. Carefully. Thoughtfully. She is a precocious child, and she has her own plans too. One day, she decides that Tommy is the boy she wants the most, and she goes on to have him. Before they know it, the fact is set, and life keeps on going. 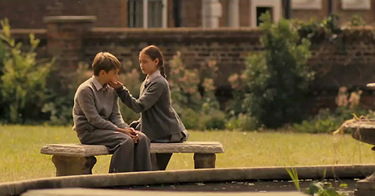 Some things in life are within our control, others are beyond. This much we know...but, do we really know? Ishiguro hints at these mysteries through subtle, patient details: a pavilion on the courtyard, a flushed teacher, an universal rumor, a seaside town, a brightly lit shop, an abandoned ship. Each fact, alone, is just a fact. Together, they interwoven into a fog of chilled alarm that seeps into every pore of the book, and thankfully, in Romanek's capable hands, the film as well.

Bathed in waning twilight and clear mornings, the film is beautifully shot and almost minimalistic with its choice of settings and colors. Roads are bare. Forests are sparse. Hospitals are clean. There is not a speck out of place, just like the lives quietly and relentlessly shuffled through these roads, trees, and hallways. Indeed, there is a sense of muted helplessness in the way these characters are moved through their lives: so sure they are of what lie ahead of them, and so resolute they are in continuing on their journeys toward the end, that it is both a tragedy of innocence and integrity.

"After all, it's what we're supposed to be doing, isn't it?"

Innocence is gained and lost, and not a trace left to be remembered.

As in "One Hour Photo" (2002), using his visual sensibilities, Romanek deftly effuses a tone of simmering repression that befits the story so beautifully. There is a sense of wrongfulness, hovering, just ebbing below the surface, familiar and yet chilling, that the audience can't help but become anxious for the fate of these characters - aching for them - and in the process caring that much more deeply. All three leads are well-cast, with Garfield and Mulligan putting in especially moving performances. Ishiguro's prose is cinema-ready, but his subtle craft of pace and tone is difficult to replicate within a two hour time frame. The film manages to succinctly distill the fundamental structure and tone of its original source, a difficult job well done by screenwriter Alex Garland. However, in the process it leaves out much of the earlier years at Hailsham, which though a sensible choice, leaves the characterizations somewhat thin. What kind of person is Ruth? Why did Tommy go along with it? How did Kathy bear through all these years? There are many lessons of forgiveness and understanding there. If you are taken with the movie, the book will take you much further.

It is therefore, in love, that I am reminded once again of the book, the film, and its ending. A piece of plastic sheeting caught on a barbed wire fence, flapping in the wind against the setting sun. It is no longer a bag: too torn from its life lived, too many bits missing. But there it is, flapping, holding on to a fence that senselessly separates one empty field to another. In between, the wind blew, the sun shined, time passed, lives unraveled. Gazing through half-closed eyes into the twilight, I thought, how nice it is to have and to be had, how nice it is to be loved, if only for a while.