An Act of Nutty Filmmaking: "The Act of Killing"

This is one nutty act of filmmaking. “The Act of Killing”, an absurd and chilling documentary about how the perpetrators of one atrocious political purge are still enjoying impunity along with power in public even after more than 40 years, has a loony unorthodox filmmaking process at its center, and what is shown in front of us through that process is as hilariously terrible as the corrupt social environment surrounding it. We are shocked to see that these murderers have been supported and celebrated by the local government and media for their ‘patriotic’ killings, and they even openly talk about how they killed people during one TV interview in which, this will certainly make your eyes rolling, the interviewer praises them for their efficient and ‘more humane’ killing method without unnecessary brutality (and, believe me, the audiences applaud for that).

You may think this is too absurd to be real, but that massive political purge in question did happen during the Indonesian killings of 1965–1966, and US and other western countries chose to ignore this terrible incident just because they supported Suharto’s right-wing regime as a part of their Cold War tactic. The people responsible for killing more than one million of union members, poor farmers, left-wing/anti-government intellectuals, and ethnic Chinese people during this bloody period are still alive well in their country, and they have been the powerful leading members of their society since the purge; they casually wield their power, money, and notoriety in front of others, and not many people dare to talk openly about the past. As a matter of fact, it is rather revealing to see that many local crew members of this documentary including one co-director are merely listed as “Anonymous” in its strange end credit.

Now it sounds like it was really hard to make a documentary about this immense historical tragedy and the following injustice still reigning even at this point, but the director Joshua Oppenheimer and his co-director Christine Cynn found the very cooperative sources who could tell them anything: the perpetrators themselves. After all, they successfully got away with what they did, and they have been quite frank about that because no one in the Indonesian government will possibly hold them accountable for that. During one of the darkly hilarious moments in the documentary, the vice president of Indonesia attends their paramilitary group meeting, and he enthusiastically praises their continuing loyal service to the country while emphasizing that the country always needs the political thugs like them for its safety and maintenance. What a wonderful country Indonesia is. 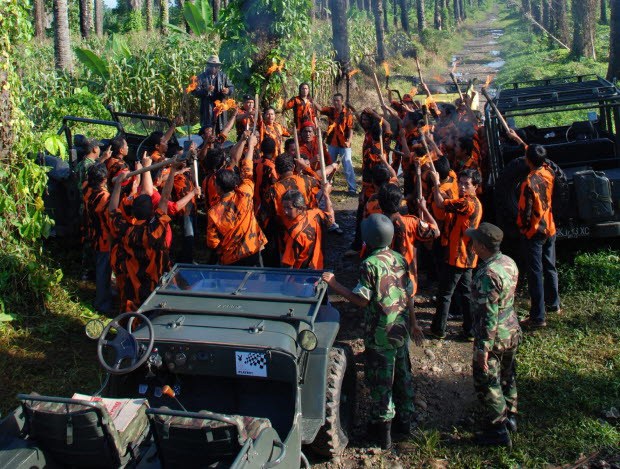 These horrible guys are surely the ultimate examples of that famous expression ‘the banality of evil.’ It looks like they really do not have any thought on what they committed or what they have been doing, and they do not have any ounce of shame on that, either. At one point, the camera follows a local leader of the well-known paramilitary group named Pancasila Youth, and this guy does not particularly mind at all about showing his shameless extortion of Chinese shop owners in front of the camera. These helpless common people have no choice but to obey to him as bullied by him for any reasons such as the lack of respect or less payment for his protection.
Advertisement

The Indonesian society is no better than him and his peers. We see a parliament member blatantly talking about how he gets some extra money through his political position, and we also observe how much ugly it can be during the election season as it is flowed with money and accompanying political influence. As shown in the documentary, the Pancasila Youth exerts a considerable power over almost every aspect of this corrupt society, and it is really hopeless to see its younger members zealously following its fascistic spirit with no question. I am sure that, if they are ordered, they will have no problem with killing anyone labelled as communist as their seniors did.

Oppenheimer and Cynn met many people participating in the Indonesian killings of 1965-1966, and they eventually encountered a man who would give them something far more fascinating than they expected. He is Anwar Congo, an old man who looks as gentle as, say, Nelson Mandela in contrast to his brutal history of violence. He and his friend Adi Zulkadry were initially the small-time local gangsters, or “premen”, selling black market movie theater tickets in Medan in North Sumatra, but then they came to lead the most notorious death squad in North Sumatra during the purge, and now Anwar is a prominent member of his society as well as an respected founding member of the Pancasila Youth. The governor of North Sumatra cordially welcomed him when he visited the governor’s office at one point, and he sweetly talks about his fun childhood with Anwar even though he surely knows well about what Anwar did during that time. 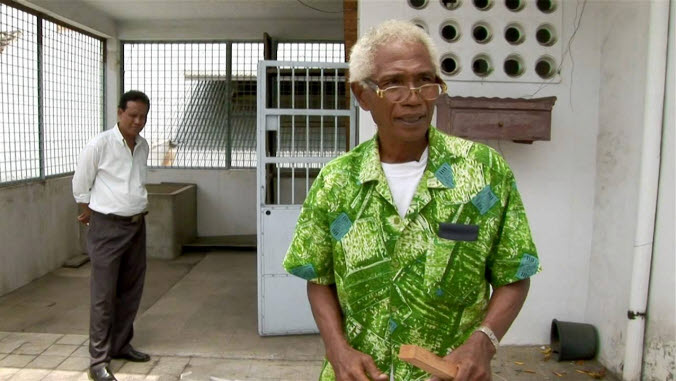 Anwar does not seem to feel so guilty about his countless murders (it is said that he killed at least 1,000 people), and he even willingly shows how he killed his victims during his paramilitary operation. When there was too much blood on the floor, he improvised a less bloody method for killing through a wire noose, and he willingly reenacts his private method at the very place where he and others killed lots of people – as reminiscing about his good old bloody years.

While admitting that he was once haunted by the memories of that savage time and his victims, Anwar shows neither regret nor remorse, and he and others keep openly talking about the details of their atrocities such as how they disposed of the bodies(They dumped so many bodies into the river in the city that the river was virtually filled with them). With Oppenheimer’s assistance, Anwar goes even further; as a long-time movie fan, he sets out to make a movie defending his position, and, what do you know, he will work as the director and lead actor in the production.

As this outrageous production starts and then proceeds, many memorable moments in front of and behind the camera strike us with their dark absurdity. The terrible scenes based on Anwar’s own killings are cheerfully decorated with Anwar’s favorite genres including musical, western, and gangster film, and its ghastly surrealism generated from the silly juxtaposition between crudeness and cruelty eventually culminates to its climax during the jaw-droppingly insane musical finale which must be seen to be believed. When they make one torture/interrogation scene, the supporting actor playing Anwar’s victim is actually the stepson of one of Anwar’s victims, and you can clearly sense his nervousness behind his pleasant gestures when he keeps assuring to Anwar and his friends that he will not criticize them through his work – and he does as much as demanded by the director when the camera is rolling. 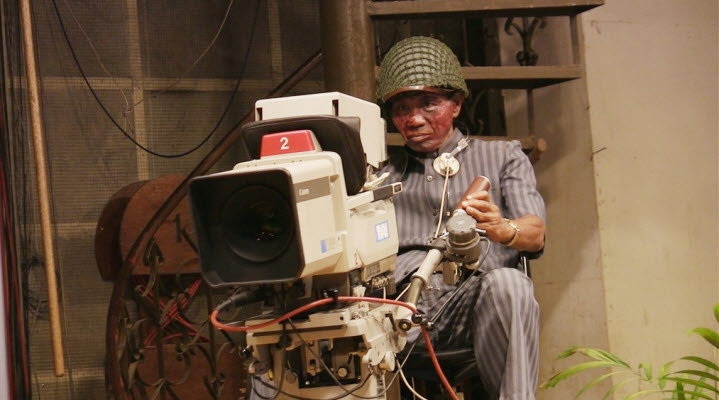 We also observe two other interesting people around Anwar. Anwar usually watches his completed scenes with Herman Koto, a jovial plump dude who comes to us as Anwar’ Sancho Panza in this crazy cinematic journey. As a man who has always revered Anwar, Herman gladly joins in the production as one of the supporting actors, and we can see that this misguided but likable guy is having a fun time with his gaudy costumes which will certainly be welcomed by any drag queen entertainer. There is a grisly scene where Anwar and Herman interact with each other as a dead victim and a gleeful, voracious killer, and this is an utterly priceless moment due to its deranged black humor behind its gory details to make you cringe(thank god this is a low-budget production).

Adi Zulkadry also participates in the production as a favor to his old friend, and he shrewdly sees what possible harm his friend’s film can cause. Unlike others, he is well aware of that he and others did unforgivable things to their victims, but he hides behind his justifications when asked about how he thinks about his killings. He chooses not to face or recognize his evil deeds, but, ironically, he later points out the moral blindness of one journalist who claims that he did not see much of what happened at that time even though he worked directly for a powerful journalist who determined many matters of life and death(that journalist in question is Ibrahim Sinik, and, as shown during Anwar’s visit’s to his newspaper company, he is still well-connected with Anwar and many other influential right-wing figures in Indonesia).

While we are constantly horrified to see more about the evil corruption of the Indonesian society and the vulgar outrageousness of Anwar’s movie production, Oppenheimer wisely lets his hero and the society surrounding him show and tell the story by themselves. He steadily maintains the position of an objective observer during his journey with Anwar as he pushes his documentary into a sheer black comedy which is both horrifyingly absurd and chillingly human, and his bold, crazy, but somehow thoughtful approach evokes those offbeat documentary works by Werner Herzog, who incidentally served as the executive producer in this documentary along with Errol Morris, who, like Herzog, knows two or three things about human peculiarity as shown in his wonderfully compelling documentaries. 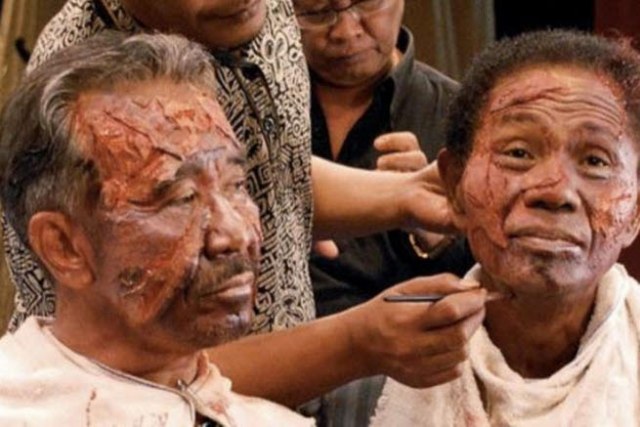 The documentary does not corner Anwar with difficult questions while he is making his movie, but we slowly see something awakening inside him as he tries to establish his own view on the killings committed by himself and search for any possible justification for him during the production. He is genuinely caught off guard by how the village attack scene turns out to be far more horrible than he envisioned. After watching one scene where he played an interrogated victim, he comments that he could feel the empathy toward his victims during his performance, though, as Oppenheimer calmly points out behind the camera, his victims went through far worse conditions before being killed.

“The Act of Killing” is a great documentary whose terrifying power comes from not only the startling human evil but also the equally astonishing obliviousness observed from its banal perpetrators. The documentary eventually arrives at a very powerful moment as it closely observes Anwar’s face around the finale, and you may see a man finally fully facing his monstrosity he has been trying to ignore for many years. While I am not 100% sure about whether Anwar’s reaction is genuine or not(one South Korean critic said he deserves to receive Best Actor Oscar if that was merely a performance) and I doubt whether this acclaimed documentary will inspire any change in the Indonesian society, I sort of wish that I witnessed a small but good proof of the power of filmmaking – but I don’t like to watch the end product itself in the documentary, by the way.

Sidenote: The documentary has two versions: the theatrical version(115-min) and the extended version(159-min). I saw the latter for this review, and I was reminded again that good movie is never too long. Yes, there are several minor scenes which can be trimmed without any problem, but I must say I seldom got bored while frequently shaking my head in disbelief. 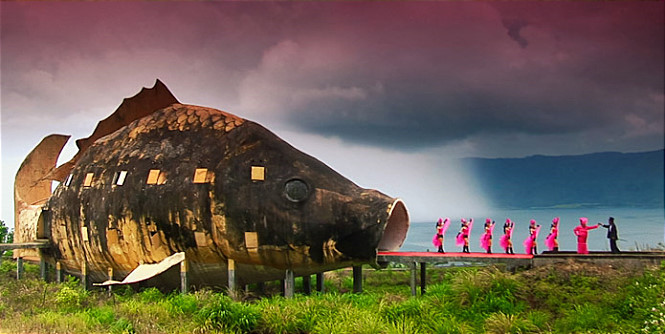