Coming on stage at the Dolby Theatre in Hollywood on Wednesday, November 12th, Sophia Loren was regal in her rhinestone-studded black gown. Some audience members rushed to the stage to get pictures and one even told Loren about a specific incident before all were ushered back to their seats and director Rob Marshall (“Nine”) gave a lightweight interview, asking all the right questions, but also introducing clips from her more famous movies and her pairings with some of Hollywood’s best male stars: Cary Grant, Frank Sinatra, Gregory Peck and perhaps the only one she voiced criticism about, Marlon Brando.

Loren was even given a little on-stage love in a brief speech by another Sofia—Sofia Vergara who recently was the Jayne Mansfield half of a “Modern Family” re-staging of an infamous Loren photograph.

Loren’s son, Edoardo Ponti, also came on stage to introduce the first movie of the night. Ponti who received both a B.A. and an M.A. from University of Southern California, directed his mother in a 2014 “Human Voice” (La voce umana) which is based on a Jean Cocteau play and adapted by Erri De Luca. The short made its world premiere at the Tribeca Film Festival in April and was also shown at Cannes paired with “Marriage Italian Style” as it was at this month’s AFI Festival.

Loren is a Hollywood story. She and her sister were illegitimate daughters of a deadbeat dad. She was discovered by the much older Carlo Ponti when at 14, she entered but didn’t win a beauty contest. In 1962, she made Hollywood history, winning an Oscar for her performance—the first Best Actress Oscar for a performance in a non-English language film in “Two Women.” 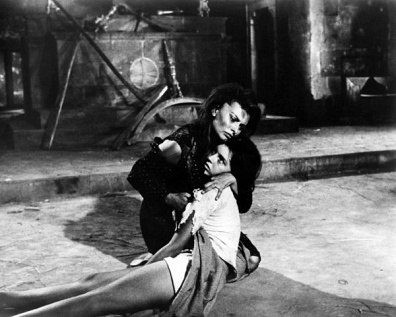 Directed by Vittorio de Sica and produced Carlo Ponti, “La Ciociara” (“Two Women”), which was adapted from a novel, was released in Italy in 1960 and the following year in the U.S. Born in 1934, Loren grew up during World War II and was only 26 when she portrayed a widowed mother protecting her 13-year-old daughter from the threats of war in the city and the countryside. Yet for her and most of the actors in the film the memories of the war were still fresh.

“I married Rome, not him,” her character, Cesira, proclaims to the man who will become her lover. He’s married and we’re not clear is she’s having sex with him from her desire or because she needs to insure that he’ll take care of what’s left of her shop. She and her daughter Rosetta (Eleonora Brown) get on a train to Naples, but the train stops because the rail has been damaged. Cesira decides to walk to her hometown instead of waiting for repairs.

From the beginning, the danger is clear. Men are looking at them. How could they not? Loren with her large cat eyes and noble bosom attract admiration and in less civilized places, lust. Het convent-educated daughter is pretty and naive. Cesire doesn’t recognize that she is crossing the threshold into womanhood, but other do.

“On your way to town, keep your head up and your skirt down,” her character remembers her own mother saying when she is safely in her old village. The girls and boys used to go to the marketplace to meet each other, but the marketplace has closed down due to the war.

Michele (Jean-Paul Belmondo) is an intellectual who aids two English soldiers when the other villagers are afraid of reprisals from the German soldiers. He shows kindness toward the two.

Although Cesira asks Michele how he can live without love, but the only love she has known is for her daughter. She hasn’t known romantic love and is unsure of how to respond to Michele’s attentions.

Loren plays Filumena, a prostitute, whom we first meet when she is 17 years old and new to the trade during World War II. During a bombing raid, she meets the Domenico (Marcello Mastroianni). Two years after the war, they again bump into each other and begin an affair that lasts for 22 years, until he marries her while she is on her death bed, even though he had a much younger fiancée ready to send out wedding invitations.

With those large expressive eyes, Loren can convey the hope and disappointment, the anger and satisfied gloating of the long-suffering Filumena whose love for Domenico has not been faithfully reciprocated.

“Marriage Italian Style” was based on a play by Eduardo De Filippo and adapted by Renato Castellani. 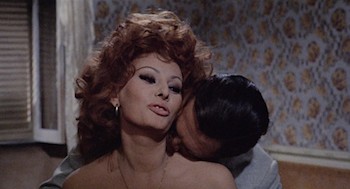 At AFI Fest, the clip of Loren dancing and singing "Tu Vuò Fà L’Americano" from the 1960 “It Started in Naples” ran before every screening I attended and her 1963 “Yesterday, Today and Tomorrow” also screened during the festival (also directed by de Sica and co-starring Mastroianni). Prior to the festival, I wasn’t familiar with Loren from any of those movies. While many might remember Loren’s more recent performances in Rob Marshall’s 2009 “Nine” as Daniel Day Lewis’ mother, Mamma Contini, or in the 1995 “Grumpier Old Men,” I prefer to remember her with her former love Cary Grant in the 1958 comedy “Houseboat.”

Grant had previously starred with Loren in “The Pride and the Passion,” a war movie. “Houseboat” fared better with the critics and was nominated for two Academy Awards (Best Song and Best Original Screenplay). Grant plays a recent widower who returns from Europe after several years of estrangement from his wife and three kids, David, Elizabeth and Robert. He wants the children to live with him in Washington, D.C., while his wealthy in-laws would prefer the children to stay in the country with them and their divorcée daughter Carolyn.

At an outdoor concert, Robert runs away but is found by Cinzia, the daughter of a famous Italian conductor. She’s tired of all the formal gatherings she attends with her father and wants to have some fun. Circumstances force Tom to change plans and he ends up living in a

leaky houseboat sold to him by Angelo who is interested in Cinzia. Cinzia is hired as housekeeper, but Tom discovers she can’t cook, doesn’t know how to do laundry and can’t make coffee. However, Robert and the kids like her better than they do their own father, Tom.

Carolyn attempts to insinuate herself into Tom’s life, but misleads Tom into buying Cinzia an ugly dress that Cinzia transforms into an elegant gown. Of course, Tom will end up with Cinzia even if Grant didn’t end up with Loren. The movie was originally scripted by Grant’s wife Betsy Drake and meant as a vehicle for Grant and Drake, but re-written so that Loren could replace Drake. Despite the backstage drama, this comedy is delightful. Loren does her own singing and even dances a very sexy Lindy.

As a theater critic, there are two other movies in which Loren had memorable roles. Also in 1958 in “Desire Under the Elms,” she portrayed the desperate young Anna Cabot who marries a much older man Ephraim Cabot (Burl Ives), becoming his third wife, but falls in love with her stepson, Eben (Anthony Perkins), by Ephraim’s second wife. Eben’s mother was worked to death by his greedy father and brought most of the farm to the marriage. Eben and his two older half-brothers (Frank Overton and Pernell Roberts) feel little love for their father. Eben is determined to inherit the farm. He can buy off his two older brothers, but Anna is determined to bear Ephraim a son who will inherit all. The movie was adapted by Irwin Shaw from Eugene O’Neill’s 1924 play (Walter Huston originated the role of Ephraim on Broadway).

The other movie is the 1972 film adaptation of the 1965 Tony Award-winning musical “Man of La Mancha.” The man is Don Quixote (Peter O’Toole). The movie starts with Miguel Cervantes (O’Toole) in prison during the Spanish Inquisition. The other inmates take away his manuscript and hold a mock trial to determine if it should be returned to him. Cervantes mounts a defense in the form of a play in which he becomes Alonso Quijana, an elderly senile man who believes he is Don Quixote de la Mancha and becomes a knight with his squire Sancho Panza (James Coco). Loren plays the scullery maid/prostitute who Don Quixote believes is his true love and calls Dulcinea. 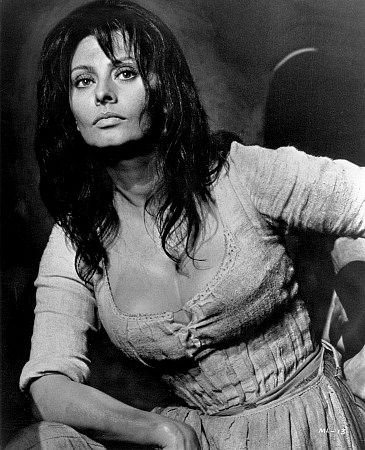 Roger Ebert wasn’t a fan of this movie (giving it two stars) and Leonard Maltin gave it a bomb rating. It is unfortunate that we don’t get to hear Richard Kiley sing in his smooth baritone. However, Dale Wasserman who wrote the book for the musical commented in his book about how the Cervantes story finally became a play and then a musical (“The Impossible Musical”) described the lead performances thusly, “O’Toole was good but his motivations incomprehensible. Sophia was, as always, beautiful—trying to turn her into a ‘savage alley cat’ was an exercise in futility. Without the benefit of a live audience the actors seemed isolated and uncommunicative. There no longer seemed to be any reason for what they were doing.”

“Human Voice” and “Marriage Italian Style” as well as “Two Women” are better places to start for those interested in learning more about this screen legend than “Man of La Mancha.”  In each of these three movies, Loren plays a woman for whom love has not gone well.

“Human Voice” is set in Naples Italy in the 1950s. We never clearly see the face of the man, yet we do see Naples. As the main character, an elderly woman, Angela, saying goodbye to what will likely be her last love (Enrico Lo Verso) as he moves on, Loren is powerful. The 25-minute short gives us brief glimpses of their time together, but the breakup actually takes place over the phone. Loren’s Angela moves for brave to breakdown as she confronts loneliness and mourns a fickle lover.

Comparing Loren’s Angela to her Filomena in many ways gives us Loren at the beginning and at the end of her career (and makes me wish there were more roles for older actresses). Yet, I still love “Houseboat” best because it shows Loren could handle comedy, a bit of singing (for someone who is not a singer) and a little bit of dancing.