“Grumpier Old Men" takes us back to Wabasha, Minn., which I think of as Grumpyville because most of the residents appear to be grumpy old men, just as most of the residents of Mickeyville are mice. The two leading local grumps are John and Max (Jack Lemmon and Walter Matthau), who are neighbors in houses so close that when the blinds are up (as they usually are), they can not only eavesdrop on each other but also even videotape what's happening next door.

One of the peculiarities of their neighborhood in Grumpyville is that beautiful, sex-starved women are constantly moving in. In "Grumpy Old Men" (1993), Ann-Margret became their new neighbor. She apparently was unable to find any eligible bachelors in the entire town (or state), except for Matthau and Lemmon, and ended up, as you will recall, marrying Lemmon.

Matthau remains a bachelor, morose and peppy, still going fishing every day, but boy, is his luck about to change: Sophia Loren moves into the neighborhood. She's opening an Italian ristorante in the building formerly occupied by Chuck's Bait Shop, and the grumps don't like that, because her customers will scare away the fish. So they play a series of tricks on her, like sticking up detour signs so her customers will get lost and surrounding her parking lot with those yellow streamers that say "Police Line - Do Not Cross." The movie's subplots involve Daryl Hannah as Melanie, John's daughter, and Kevin Pollak as Jacob, Max's son. They got engaged in the previous picture and now the Grumps are planning their wedding and reception, which will mostly take place, it appears, in saloons and bait shops.

Also on hand is 95-year-old Grandpa Gustafson (Burgess Meredith, at 87), who seems to live forever on his strict regime: bacon for breakfast, bacon sandwiches for lunch and drinking his dinner.

Meredith, as a randy old coot, has some of the movie's best lines; he more or less singlehandedly accounts for the "salty language" that wins the movie a PG-13 rating. But the film basically belongs to Matthau and Lemmon, who have worked together so often that they fall easily into a rhythm of insult and affection.

Ann Margret seems to have fallen easily into the married life, which mostly consists of pecking her husband on the cheek before he heads off to fish. And the young people go through a perfunctory spat, more or less for plot purposes.

This is, of course, a big-screen sitcom, and in fact I would love to see this material transplanted to the TV screen, where it belongs.

John and Max are next-door neighbors in the tradition of the Ricardos and the Mertzes, living in each other's pockets and discussing every decision, no matter how intimate. The addition of the visiting sex bombs resembles the way sitcoms use guest stars. And no misunderstanding is so big it can't be cleared up with a joke, or a kiss.

"Grumpier Old Men" is not terrifically compelling, although it is probably impossible not to enjoy Matthau and Lemmon acting together.

It feels like what it really should be, a sitcom pilot. By the end of the film, both of the Grumps have gotten married, so I guess there won't be another sequel, unless something tragic happens to one of the wives, or one of the Grumps starts fooling around. Hey, look - there, across the street! Isn't that Joan Collins moving in? 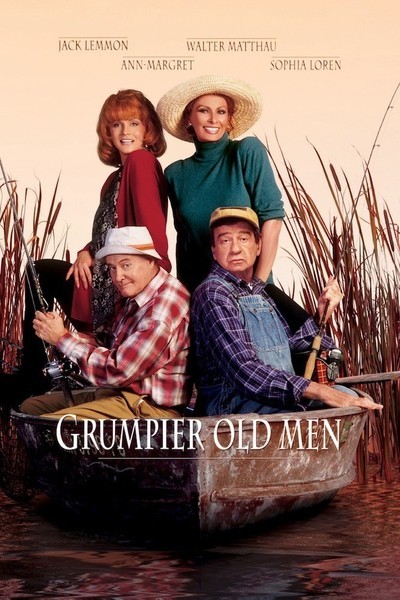