A snake in the grass drinks his own poison 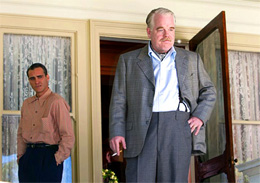 Movies usually present the life and religion of conservative masses as that of simple-minded, bigoted country bumpkins. Paul Thomas Anderson's "The Master" (2012) explores the life and religion of the liberal elite, presenting them as sophisticated frauds eagerly exploiting eagerly exploitable colleagues. If we spoke of "There Will Be Blood" (2007) as "madness," we might accurately speak of this film as "intoxication." And, as is the case with the previous film, "The Master" is amazing in its characterizations, sails us through its cinematography and faded colors, but its narrative confuses us. It is said to be a story about the development of Scientology, but it also recalls Byrne's "The Secret," as well as most every television healer on either side of the Atlantic or Pacific. I don't know that the story is about the religion or the cult leader, as much as it is about the rabid pit-bull he keeps on his leash.

Omer M. Mozaffar is a lecturer in Asian Classics at the Graham School of the University of Chicago, and was granted a 2011 Excellence in Teaching Award in the Humanities, Arts, and Sciences.

Freddie Quell (Joaquin Phoenix) saunters with a crook in his back, glue in his lips, and leaking pressure in his brow. His emaciated posture seems to come not from injury or undernourishment or intoxication or even poor immunity. Rather, his crookedness somehow comes from immodesty and immorality. At first, we think he is an escapee from Wiseman's "Titicut Follies" (1968) sneaking into a Norman Rockwell portrait. We soon realize, however, that he is the sinister salesman hawking his snake oil to anyone who will drink it, including himself. He is the Enlightenment thinker- Hobbes' innately wicked man, who knows nothing of morality. He has moments of humanity, seeking love in a girl, but instead occupies himself with a libido that is so strong that it affects what he sees. 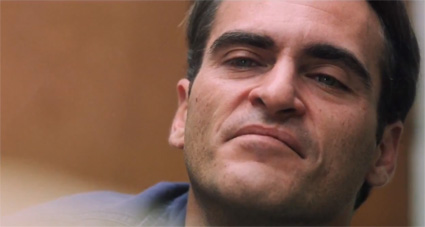 Soon, he becomes Igor and Guinea Pig to "the Master." Lancaster Dodd (Philip Seymour Hoffman) is a cultivated stiff-neck of proper family lineage. We do not know if he is self-made or an heir, but see that he has relations among people of disposition and trained manner. We learn, however, that he leads a religion of sorts that involves improvisation disguised as considered intellect. Meaning, he is a fraud, knows he is a fraud, knows his family knows that he is a fraud. Nevertheless, people are buying what he is selling. In the business of religion, that is all that matters. 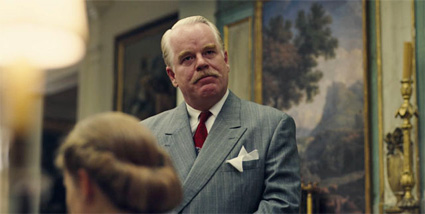 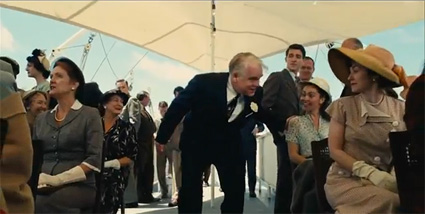 I do not know the difference between a religion and a cult. Usually, the religion is larger. Usually, the religion is older. What intrigues me more, though, is the sustainability of religion. Our culture permeates with three very strong traditions to keep life sober. First: an implicit process of Checks and Balances. We usually speak of Checks and Balances in government, with the goal of placing limits on power, thus placing limits on exploitation. Likewise, with our embrace of science (with focus on the method), we implicitly place checks on ideas, debunking not only many aspects of much religion, but also many of the nonsensical philosophies of the Enlightenment.

Further, in protecting dissent, we also protect the right of the individual to not only to speak against power, but also to choose his or her poison, be it a poison of ideas or a poison of the drink. So, if people want to follow a fraudster, they have every right to do so. When an observer questions the science of Dodd's time traveling "anti-hypnosis," more interesting for us than Dodd's rage or Quell's explosions is the participation of the crowd, eagerly watching Dodd's subject reach her supposedly trillion year old secret horizons. Dodd provides a stupid defense, which exactly mimics the kind of defenses I have heard so often in religious circles, but it does not matter to those who are already drunk with his hope.

And, as part of our goal to open the environment to allow people to fulfill their potential (something that is more Rousseau than Hobbes), we have an adversary system of competition. The political system, the legal system, all sports are permeated with competition. Here, the competition is between Quell and Dodd. Both are imposters, who do not care about their trail of carnage poisoning people along the way. We wonder if either ever believes the other. Quell, the walking sin of flesh, pretends to let Dodd civilize him. Dodd, sin of the arrogant mind, pretends to mold him. Or is either actually pretending? Just as Quell's main client for his elixir was himself, perhaps Dodd's main client in his charade is his own self. In many scenes, we find the Master and the Servant fighting for dominance. Even when it seems that Dodd is controlling Quell, we wonder who is really controlling the con. In the end, they simply part ways, seemingly continuing their swindles. 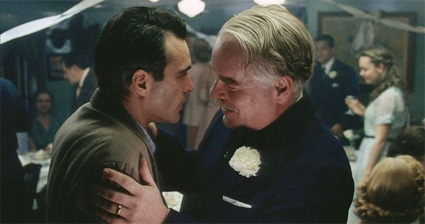 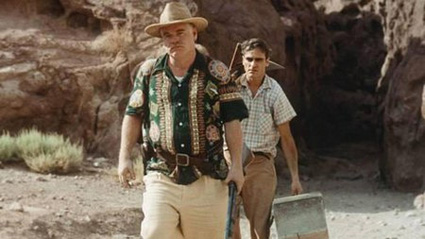 So, when we speak of the sustainability of religion, we see again that it is not authenticity or accuracy that drives its adherence. Most often, it is efficacy, giving people what they seek. Here, it is the illusion of efficacy, giving people what they didn't know they were seeking, making them think they needed to seek it. Religion is, here, nothing more than a tenuous tincture, a sophisticated glass of spirits.

As a film about intoxication, there are at least four intoxications in this film. In each case, the liqueur is an improvised concoction, rather than any methodological recipe. First and foremost, Quell produces these potions mixing booze, turpentine, rocket fuel, detergent and anything else he can find. While there might be plenty of chemistry, there is no formula. Innocents partake of his drink, not because of need or want, but somehow he just gets them to do so, because he can.

Second, we have the intoxication of Dodd's cult. He has the loyal support of his current wife (Amy Adams) who at times exerts her own authority, but often expresses her participation through fake smiles or fierce scowls. His skeptical son (Jesse Plemons) continues along with the ride, while his daughter (Ambyr Childers) drinks up the father's lies in the way many daughters do. Her husband (Rami Malek) seems to be a previous iteration of Quell, once swarthy now simply colored, having been transformed through Dodd's tonic. 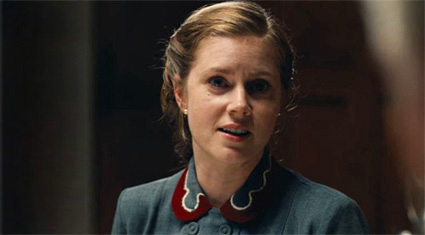 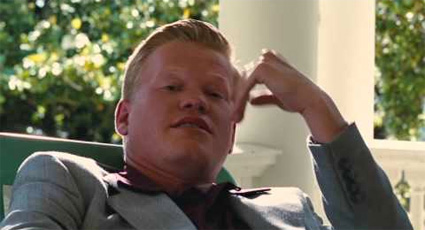 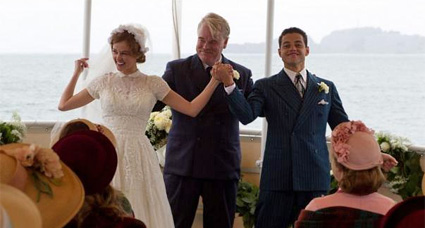 Third, we have the intoxication of Anderson's film itself. I remember the excitement among my colleagues when the film first screened in Chicago. I missed that screening, watching it in a local multiplex. Cinematographer Mihai Malaimare Jr.'s palette recalled Gordon Willis, making me long for the 70mm print. The vivid characters recall Spielberg, especially in his war pictures, but with a sharp dash of salt, though our whole focus is on the two main stars. 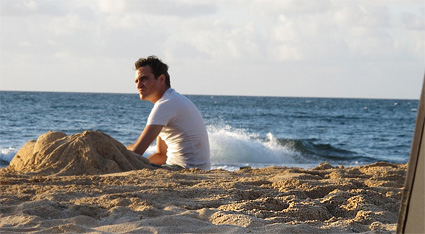 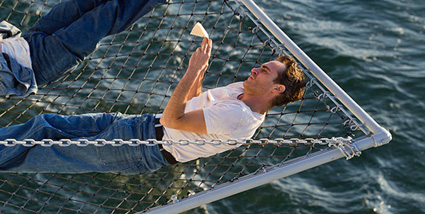 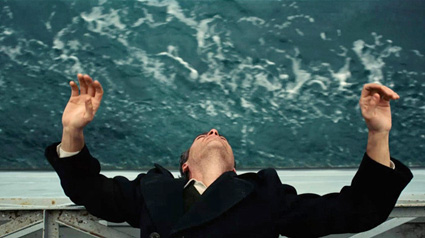 But, as the film moved forward, it started to seem like its own improvised concoction. I did not know where the film was taking me, and as it ended, I do not know where I was supposed to be. While watching, I began to wander not in the film, but away from the film. I left with the same types of head scratching I had with Anderson's previous film. Still, I cannot write off this confusion very easily. Anderson shows his profound mastery of narrative in his early films. Sometimes that mastery plays out in individual scenes: we watch Quell speaking at length to some mystery character either off screen or hidden behind an obstacle, fulfilling our satisfaction when the person is revealed, even though that person would still be mostly unnoticeable. So, the best I can reach is a question mark, and perhaps that is the intention. If his first films exercised plot, then perhaps his latter films exercise sentiment.

But, all three of these intoxications feed into the ultimate source of drunkenness, the ultimate potion, the ultimate driving force here: hope. Quell's booze is a pathway of hope, for the drinkers, but also for us, wondering what he is doing. Dodd's religion gives people an empty hope, but it is hope nonetheless. And, we find ourselves feeling the same way, approaching this auteur's film.

So, at the end of it all, perhaps religion's greatest efficacy is its ability to give something above fear. Sometimes through mystery. Sometimes through truth. Sometimes through bunk. Sometimes giving us the façade of a giant, old department store where everyone dresses in nice clothing before entering. And, sometimes religion gives us hope through what any sensible person should know is pure poison.