A sermon no one can sleep through 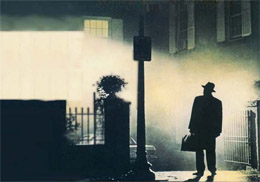 Many of today's films seem to be made solely for financial reasons, but the case of "The Exorcist" is more complex than most. It was a tremendous financial success, the all-time box office champ for a while, but only a psychic could have predicted that people would line up to see a movie of this nature.

In a recent article called "A sermon no one can sleep through" author William Peter Blatty talked about his motivations for writing the source novel and his disagreements with the picture's end result. Is there really a sermon to be found within "The Exorcist"? Almost forty years have passed since it first opened and, even though Blatty denies writing it as a horror piece, the film is widely regarded as the most frightening feature ever made. "Sermon: is certainly not the first word that comes to mind when discussing it.

"The Exorcist" is an important motion picture of considerable craft and depth. Based on the ability to reach its genre's goals, it is surely among the most effective films ever made. It should be a priority for many movies to make the audience sense they've lived through the proceedings on screen, and this one does it in spades (never mind it is the equivalent of having salt poured into your open wounds). Among horror entries, this is a completely different animal. The picture represents a sensationalistic portrayal of rare events considered by many as true to life, and that makes it all the more difficult to shake off. It is by no means your typical, overblown flick about satanic activities that bring one bizarre death after another; those seem fun in comparison. This one goes straight home with you, and good luck getting it out of your head.

"The Exorcist" is mainly the story of Father Karras (Jason Miller), a Georgetown Jesuit priest who's called upon by actress Chris MacNeil (Ellen Burstyn) when her daughter Regan (Linda Blair) goes through a radical change of personality with no physical explanation. Karras is living through a crisis of faith and his reaction is to disregard any possibility of a supernatural explanation with the same attitude as St. Thomas (show me and I will believe it) that he used when evaluating his own life convictions.

Lt. Kinderman (Lee J. Cobb) is assigned to investigate a crime related to the case and he represents an outsider's point of view that allows the audience to go deeper into the event's intricacies and to better understand the principal characters, religious and otherwise. As Karras finds himself over his head, he is assigned Father Merrin (Max von Sydow) a veteran expert on demonic possession...Together they head for a final, epic confrontation with Merrin's old nemesis demon that can only eventually be overcome by Karras' tragic act of self-sacrifice. At film's end we come to realize this was also essential for the man to come to terms with his own beliefs and doubts.

"The Exorcist" doesn't resort to the genre's usual clichés to frighten an audience, nor does it needs to. It takes its time immersing us on the subject, which it treats dead seriously; there's not a moment of lightness or humor to be found. Director William Friedkin employs many cinematic techniques to generate a sense of wrongness. Some, like the numerous shots of closed doors, or the use of subliminal images, are very subtle; many others are obvious. This is one of the rare horror pictures in which the day scenes are just as horrific as those set at night. The filmmakers show no scruples about providing unbearable sights and notions (think of the involvement of Karras' mother in the plot). They seem to be on a mission to unsettle the moviegoer. Nothing is off limits. Once the show is over, the nine-minute exorcism itself feels like it lasted much longer (as we would say here in Mexico, it does feels nine minutes long, but as if lived underwater).

The film came out during the early 1970s, a revolutionary period of cinema in with films that would have been unthinkable just a few years before, such as"A Clockwork Orange" and "Last Tango in Paris." According to Wikipedia, Blatty based his novel on a real life case that allegedly occurred to a boy in the 1940's, though reportedly it was nowhere near as extreme. Choosing a child as the victim clearly increased the impact of the role as did the additional fact that the victim was made female; we're not prepared to see a little girl acting in such a disturbing way). It's hard not to wonder whether the casting of a young child in such an intense role constituted some sort of child abuse but then again, Blair was selected among 600 other hopefuls, any of whom would have required parental consent to take the part.

The central predicament in "The Exorcist" is that Karras is only able to find his way by living the most horrible of experiences and saving the girl with his improvised final decision, an act of blind faith. It's worth noting that in Blatty's novel, he wasn't the only character whose views on religion were affected by this ordinance. According to Wikipedia, Blatty was disappointed that the ending "did not suggest that the Ellen Burstyn role had been drawn into God's orbit precisely because of the horrendous experience she has endured".

Considering that Blatty wrote the screenplay himself, it would seem that his priorities differed from Friedkin's. Blatty seems to be under the impression that God's existence can be re-affirmed by the individual's awareness of the existence of evil and even thought the movie unquestionably awakes the viewer's senses, I have my doubts it achieved that goal, despite the fact that it provides as happy an ending as it possibly could. Perhaps Blatty's intentions got lost somewhere among the excessive gore which ironically, may represent the best explanation for the picture's commercial success. That millions saw it makes about as much sense as the idea of long lines of people hoping to get waterboarded. I can see it appealing only to that part of us that stops and looks when passing by a car accident.

My first viewing of "The Exorcist" came at age 17, after years of listening to all sorts of tales about it with disbelief. As the film progressed I remember asking myself what possible reason could be keeping me from leaving the theater. Even though there was no good answer, I chose to remain. Perhaps this was about an idiotic self-challenge of sorts. As we grow older it becomes harder for movies to scare us but I find "The Exorcist" to be the sole exception; repeated viewings diminish none of its impact.

On balance, it has brought me more harm than good as I believe it is despair that it is best at provoking. I can rationalize its morale, but never fully appreciate it. Years later "The Passion of the Christ" came out with its own share of disturbing, demonic scenes and yet it managed to leave me with the most positive of marks. I tend to see "The Exorcist" simply as the one recurring nightmare left.

Some years ago, a question in one of Roger's Answer Man columns expressed disbelief that some young people were witnessed laughing at a reissue of the film. I believe there are only two ways of looking at this: either they felt overwhelmed, and their laughter represented a defense mechanism, or all sensibility had been lost by them. We've been bombarded with so much gore and violence for some to lose all traces of sensibility, but I tend to favor the first explanation. I have a friend who once told me this is the first film he recalls seeing as a child. That sounds to me like skipping the tricycle and learning to drive on an eighteen-wheeler instead. Actually, he turned out to be a very nice and normal guy.

I would like to thank my old friend Mario Zavala for pointing me to Blatty's article and encouraging me to write this.