A psychopath and the Female Gaze 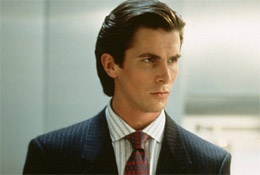 I love a black comedy. Always have. You know, all those tragic mishaps that seem to befall Alec Guinness in the English countryside when no one is looking? But then who doesn't love an Ealing comedy. I also like "Dexter" and for similar reasons; it too, has an air of subversive glee about it, albeit darker and more graphic in nature. The appeal is never about seeing people die, though (where's the fun in that?). Nor in watching mindless torture porn like Hostel; a genre increasingly viewed as the favorite pastime of failed experiments in parenting, moreover, and thus to be avoided at all costs. I loathe the entire genre aka "Women in Danger" films as Gene and Roger once termed them. American Psycho however, is anything but a slasher film.

UPDATE: It took me a while to find this interview; I saw it back when it first aired and it's well worth watching and for it says and speaks to. Charlie Rose - A conversation with Bret Easton Ellis, author of "American Psycho" (2000), along with Mary Harron and Christian Bale on Thursday, April 13, 2000.

Based on Bret Easton Ellis's novel of the same name and directed by Mary Harron, who also wrote the screenplay with Guinevere Turner, "American Psycho" is a brilliant and scathing satire of Reagan-era yuppies and their shallow, consumer-driven lifestyles. And in particular, of the behavior of Wall Street investment bankers in the 80's; all those privileged white males in designer suits - the same type who'd later go on to crash the economy in 2008.

In terms of story and plot, it's essentially a psychological thriller with horror, satire, and black comedy added to the mix. It focuses on a wealthy but unstable Wall Street yuppie named Patrick Bateman who's secretly a psychopath or sociopath driven to commit increasingly horrific and bizarre crimes in the wake of his mounting psychosis - from murdering a homeless man and his dog, to keeping a head in his fridge, while all the while striving to conceal the truth from others.

Not that it actually matters; no one is paying enough attention to notice, let alone care. The fiancee he's cheating on and later dumps is sleeping with someone else, as is everyone else around him. His male pals are too busy snorting coke in the washroom, along with Bateman. Det. Donald Kimball (Willem Defoe) does arrive to investigate the disappearance of a co-worker, Paul Allen; whom Patrick killed with an axe in retaliation for having a better business card and later insulting his choice of restaurant; that's one of the funnier albeit disturbing scenes - and I'm not talking about his taste in pop music, although in retrospect... Point is, it's left open-ended, along is his fate; we never see Bateman getting caught, let alone arrested for anything.

In the March 12, 2012 issue of The Paris Review, author Bret Easton Elliss talked about what inspired him to write the book:

Christian Bale plays Patrick Bateman, and in a 2009 interview with Hillary Weston for Blackbook, director Mary Harron was asked about it.

I mention that because I'm subsequently aware of why Ellis wrote his book, in addition to what inspired Bale - which I find hilarious, by the way, and while I can appreciate where Ellis was coming from, his novel, in truth, is such a tedious slog of shallow minutia that I confess, I was never able to finish it. It's too much like sticking your head into a copy of GQ and leaving it there to rot. A little goes a long way, at least on paper. But as a film...it transcends the page and becomes something eminently greater; a rare exception.

In short, it observes a sociopath through the female gaze, and in the process isn't afraid to undercut the violence so favored by men, and focus instead on the pathology behind Bateman's behavior. It strips the male ego bare, reveals what's crawling around underneath, and best of all, doesn't go about it at the expense of female characters. Quite the opposite. It allows us to see what they really think of him.

I still remember how peeved I was when I saw the teaser poster for David Fincher's "The Girl with the Dragon Tattoo" (2011). It amounts to the sexualization of a rape victim. And then later on, I heard about the changes he'd made to Salander's character - softening her appearance somewhat to make her more attractive, while modifying the relationship with Blomkvist so as to make it less threatening to men. WTF?

Not that I was surprised. It's par for the course. Like "Drive" (2011) with Ryan Gosling - it's ultimately about what men want to see - even if it means having to regurgitate then eat what's come before to maintain an illusion of political correctness, while being just as clueless about itself as the genre its a homage to. That's why, in the wake of films like that, I find myself hugging Mary Harron even more for her take on "American Psycho."

What a breath of fresh air it was to see that gaze! Like someone had thrown open a window and a greater measure of truth had flown in. We get to see what passes between hookers while servicing a client, from a woman's point of view for a change; all those small, knowing glances speaking volumes. And conversely, to see the camera focus more on Bale during sex - resulting in one of the biggest laughs I've ever shared with friends. I've heard men remark upon the courage it must have taken him to do it, but it seems to me all that's required is the ability to laugh at oneself. I could make a joke at this point about the Spirit Awards and Christian Bale's infamous profanity filled rant, but I won't.

It's more in the humorous moments than anywhere else, where you ironically see just how psychotic Patrick really is - and by extension, his world. Instead of being horrified by his behavior - you laugh at it. You laugh at the monster because you're able to see now what's really there: an utterly clueless, truly pathetic and deeply fucked-up misogynist sociopath. Thanks to Harron's direction, which never strays, it stays focused on that overriding fact. Instead of filling the screen with blood and gore and allowing Bateman to swagger like some evil badass, she takes the piss out of his hubris. She pulls a Joss Whedon so to speak, and does to Bateman what Joss did to his monsters back in the day, on "Buffy the Vampire Slayer." That is: undercut, undercut, undercut. Example: having Patrick Bateman run naked with a chainsaw down a hallway in pursuit of a prostitute. No matter what happens, he'll never end up looking anything other than ludicrous, insane and beyond pity.

In addition to everything else you could say about it socially and politically, "American Psycho" is genuinely funny. I mean, Bateman's so psychotic towards the end, he even tries to a feed a kitten into an ATM machine... before quickly realizing it won't fit, opting instead to use his gun, only to be interrupted by an elderly woman. He does wind up shooting his gun, but at the woman, not the cat - and yes, I let out a sigh of relief. As oh, thank God! Not the kitty!

Teetering on the edge, and following a succession of surreal and random murders, Bateman then confesses all to his lawyer, Harold, leaving a message on the phone. His lawyer doesn't recognize him the next day at the club when Patrick seeks him out, let alone believe what he'd heard; convinced it was all a sick joke. He even shares he had dinner with Paul Allen in London. And Bateman comes to the realization that it's all been a moot point. There's no relief. There will be no punishment, not that he feels any regret. The only thing he feels is his own pain, while still being a mystery to himself, along with wanting to continue inflicting his pain upon others. His confession has meant nothing.

Earlier, his secretary Jean had had a narrow escape. We see her realize it, upon discovering Patrick's drawings depicting sickening scenes of murder and rape. That, for me, was the movie's darkest moment - for all the gore Harron never showed is contained in those sketches. And you feel the true horror of it now, as the film officially stops being funny.

"American Psycho" was ignored by the Academy back in 2001. It didn't receive a single nomination - not even for Christian Bale's performance. I assume that's because he wasn't an actress performing faux-fellatio in a Hollywood remake of Swedish film. No matter, he got his Oscar, albeit for a different movie - although I personally think "American Psycho" is actually his best work. As for director Mary Harron, there's still time. Meanwhile, I look forward to seeing more of her work. And her gaze.

"American Psycho" came out of a place of severe alienation and loneliness and self-loathing. I was pursuing a life - you could call it the Gentleman's Quarterly way of living- that I knew was bullshit, and yet I couldn't seem to help it. "American Psycho" is a book about becoming the man you feel you have to be, the man who is cool, slick, handsome, effortlessly moving through the world, modeling suits in Esquire, having babes on his arm. It's about lifestyle being sold as life, a lifestyle that never seemed to include passion, creativity, curiosity, romance, pain. Everything meaningful wiped away in favor of surfaces, in favor of looking good, having money, having six-pack abs, dating the hottest porn star, going to the hottest clubs.

On the surface, like Patrick Bateman, I had everything a young man could possibly want to be "happy" and yet I wasn't. I think "Fight Club" (1999) is about this, too--this idea that men are sold a bill of goods about what they have to be in order to feel good about themselves, or feel important. No one can really live up to these ideals, so there's an immense amount of dissatisfaction roiling through the collective male psyche. Patrick Bateman is the extreme embodiment of that dissatisfaction. Nothing fulfills him. The more he acquires, the emptier he feels. On a certain level, I was that man, too."

"How did you and Christian Bale develop his character in American Psycho?"

"It was definitely a process. We talked a lot, but he was in L.A. and I was in New York. We didn't actually meet in person a lot, just talked on the phone. We talked about how Martian-like Patrick Bateman was, how he was looking at the world like somebody from another planet, watching what people did and trying to work out the right way to behave. And then one day he called me and he had been watching Tom Cruise on David Letterman, and he just had this very intense friendliness with nothing behind the eyes, and he was really taken with this energy."