A president in a fishbowl 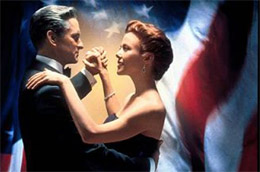 Rob Reiner's films represent a remarkably mixed bag. The best scripts he's chosen have made for rather good pictures ("Misery," "When Harry Met Sally..." (1989), "A Few Good Men") and the bad ones ended up being "North" and "The Bucket List". There have been a few filmmakers like Hitchcock who always managed to take their work's origin to the next level but I have my doubts even he could have made "Bucket's" digital journeys to the Taj Mahal/Himalayas interesting.

FFC Michael Mirasol spotted this evidence of the long-lasting influence of "The American President."

By the same token, it's hard to imagine anybody coming up with a bad "The American President" (1995). Aaron Sorkin's script was just too good to begin with, as sleek and smart as those of "The Social Network" (2010) or "Moneyball" (2011), every phrase gives us an insight into the characters, every punchline hits a bulls-eye, and this goes on for two hours.

"The American President" is that rare Hollywood film with a defined, partisan perspective. John Travolta did play a Clinton-like figure in "Primary Colors" (1998) and there have been plenty of biopics about presidents like Oliver Stone's "JFK" (1991), "Nixon" (1995) and "W." (2008), but fictional leaders are usually ambivalent when it comes to their on-screen beliefs. Jimmy Stewart's Jefferson Smith in "Mr. Smith Goes to Washington" was mostly concerned with corruption in the Senate and Kevin Kline's Dave Kovic in "Dave" (1993) were all for sensitive spending/caring for the homeless, but this is as far as their views were explained. Both of these figures made the world of politics look simple and easy: a little eagerness and goodwill were all it took to make their peers look like power-hungry fools and it didn't hurt to be an outsider to the establishment with new ideas.

Their common link with "The American President" is that all three tried to convey that the problems in Washington were the result of skepticism from the people there and their complacency towards their jobs. Only Reiner's film cared to ponder on the hard choices that need to be made on a regular basis. We leave the theater with a good idea of what a day in the life of such a man is like and the kind of fishbowl existence he must experience, where even his tiniest of decisions will be scrutinized by the public and used by his opponents for their own gain. The picture does a great job of helping us grasp compromise in the world of politics and perfectly incorporates this topic with the love story at its core.

Even though this is a tale about the most public of figures, at the heart of "The American President" is a simple love story between a widowed man (Michael Douglas' President Shepherd) and a woman (Annette Benning's Sidney) and the repercussions to their family and friends when a romance blossoms in extraordinary circumstances. The film is set at the crucial stage of an election year in which the President's detractors are dying to find a chip in his armor. Sorkin's script gives emphasis to the peculiar obstacles surrounding this relationship and, as banal as they may seem at first, there is a truth to their scenes that makes them the best in the film. Think of the unique complications Shepherd has to face when he chooses to do something as simple as ordering flowers for his girl and the sit-comy (but priceless) reaction he gets from the sales clerk when she comes to realize who exactly she's been nasty to lately.

Reiner depicts a White House that is much more intimate and realistic than the prior one in "Dave," where the president's sleeping chambers looked like something out of Hugh Hefner's home. There is a shot I love in "The American President" of a weary President Shepherd climbing a stairwell towards his private chambers (following a tough day at the office) with the backdrop of an introspective JFK in portrait. This scene hints at the parallels between the tough situations both men had to face in their own times. What's curious here is that when I took the White House tour some years ago, I noticed that this particular painting was indeed located near a set of stairs, but in a spot of no particular relevance that made it seem much smaller and insignificant. Reality can never beat the movies when it comes to making true life objects look great.

"The American President" has great energy from the first frame to the last, but I don't think it lives up to its full potential--and not because of a lack of excellence in its components. The picture's less believable aspects derive from Sorkin's decision to write the script completely one-sided. Shepherd's staff members are bright, charming, decent, loyal, and they all share the sharpest of wits. Their occasional quarrels have to do with their particular views on what's best for country and beloved boss. This exuberance of virtuosity doesn't really belong anywhere near a world such as politics and even though the same criticism could apply to Jimmy Stewart's Mister Smith, at least he belonged to a different, more innocent time.

In opposition we have Senator Bob Rumson (Richard Dreyfuss) who is evil, narrow minded and has no redeeming qualities whatsoever. When he joyfully chants "It's beginning to look a lot like Christmas" while checking photos of Sidney burning a flag, you can actually see him sneer (no wonder Dreyfuss was chosen to portray the real life politician Dick Cheney in "W" years later).

Annette Bening plays the Green lobbyist who becomes the president's love interest. It is to Reiner's credit that he cast an actress who's able to convey innocence and vulnerability alongside remarkable intelligence. She's beautiful to the point of glowing and her wrinkles only add to the truth behind her persona (this is a real woman and not just a lovely face). Lastly we have President Andrew Shepherd who is portrayed by Douglas with utter confidence, leadership skills and a great sense of humor. He will never make a decision without the most thoughtful of considerations (or an erroneous one for that matter) but he can't be described as idealistic like Mr. Smith or Dave.

Shepherd is thoroughly aware of where he stands, of what those around him are thinking, and by the end of the movie; his experiences have only served to make him wiser and more considerate. Even Oliver Stone showed some concern for giving his "W" a few shades of grey.

Rob Reiner never disclosed if his president was based on any particular real life leader but the film came out during President Clinton's (pre-Lewinsky) years and there are several real life allusions to him such as a first daughter that brings Chelsea to mind. During the time period when "The American President" opened, Clinton 's morals were constantly being put into question by the opposing party and the film was obviously made at least partially as a critique of his antagonists' obtuse perspectives. Later on, it became clear there had indeed been fire where there was smoke. Sorkin and Reiner came out looking as if they had bet on the wrong horse and yet recent years have only served to make Clinton's presidency look better.

The point is that great feats are often accomplished by complicated men so it makes little sense depicting them as one step from canonization in the first place. That "The American President" should lean toward being liberal or conservative is not the issue here but rather that a more complex president than the one played by Michael Douglas would have made for a more ambitious and yes, better movie. Of course, even projects that fall short of their potential should be this good. What we're left with is a tremendously entertaining film that falls short of greatness.