A Lincoln who creaks with every step 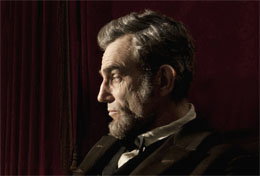 Steven Spielberg's "Lincoln" (2102) is exactly what we would expect it to be. It is reverent. It is of such epic scope, with such microscopic attention to detail, that it competes with any period piece in the history of cinema. Daniel Day-Lewis disappears into Abraham Lincoln. So many supporting players ornament this film that a familiar face appears on screen every few minutes, adding depth, personality, and charm. Tony Kushner's script is complex, pious, and at times mesmerizing. Janusz Kaminski's cinematography, mixed with Rick Carter's production design, provides a portrait in every frame.

"Lincoln" is not so much a biopic, as it is a slice. It is a window into the final months of the American President's attempts to abolish Slavery in the process of ending the Civil War. We closely watch the crafty, clever efforts to negotiate politics, using any means necessary. Save for a few, our characters are not humans, but politicians taking it upon themselves to decide upon the humanity of the enslaved.

I have to admit that I was not looking forward to this film. After more than a decade of various forms of American History lessons in school, there are few time periods I would rather avoid, and most of those periods take place in our country. And, unless we are speaking about vampire killers, period pieces focused on lauded heroes tend to be reverent, and thus boring. And, some people will find this movie to be rather tedious. But, I thoroughly enjoyed the film, down to the final tally for the votes on the 13th Amendment, counting the votes alongside Mary Todd Lincoln and various Union Soldiers.

Of course, we must first speak of Daniel Day-Lewis. His "Lincoln" is a withered man, whose thin, rickety frame creaks with every step. His sullen eyes yearn for relief from insomnia, an insomnia caused from his intellectual somersaults or from the mourning of lost sons and soldiers. He is a man of such deep grief, that he has run out of tears. He loses himself in his thoughts, so much, that his wife must force her way in, while his mostly ignored sons plead for an entry. That is sometimes the nature of saints: they are so present and they are so very absent. But, is he a saint? Maybe. Maybe not. Nevertheless, he is definitely a lawyer. 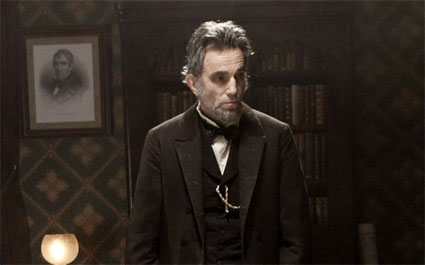 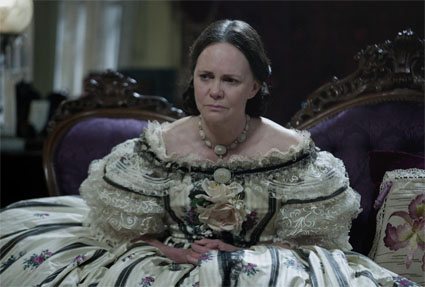 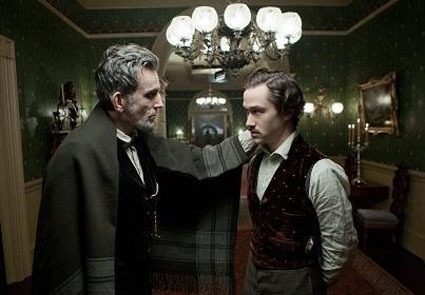 At the heart of the film is the message that politics are negotiation, that we can only fulfill our aspirations and ambitions through crafty maneuvering. The point there is that if there is a Right or a Wrong morality, then we shall not find it in politics, for politics place focus on interests rather than morality. Your moral compass might direct you straight North, but it cannot warn you about the swamp next to you. This point finds a similar thread in President Obama's book, "The Audacity of Hope." Writing about his experiences, moving from a career as an idealistic community organizer to a politician, he had to shift from the work driven and informed by prophetic ideals to work focused on compromise in the process of fulfilling higher interests. The President tells us that that "audacity of hope" is that boldness to believe that we can still fulfill our ideals through the messy, compromising negotiations of national politics. In other words, for Spielberg's "Lincoln" as for President Obama, the ends justify the means. As I type this essay, I find myself trying to remember the last time - if ever - we were in a war driven by goals of morality and justice, as opposed to an armed conflict focused on fulfilling interests. If we engage in modern warfare for the fulfillment of interests, then there is no winner or loser. Rather, either we succeed or fail in fulfilling our interests. Perhaps the losers are the dead.

So, from that perspective, "Lincoln"'s Civil War was only secondarily focused on the abolition of Slavery. "Lincoln"'s war focused on reuniting the nation. The opposition to Slavery in the North, and the defense of Slavery in the South was primarily a matter of economic competition, rather than concern for the dignity of humanity. The point is that Lincoln seeks to use the opportunity of the moment to abolish Slavery. The film seems to make this point clearly, in multiple ways; still, I suspect many viewers will not notice. On that note, I do not know that Spielberg's Lincoln regarded all races as equal and identical, as much as he regarded all races as having the right to demand equality. 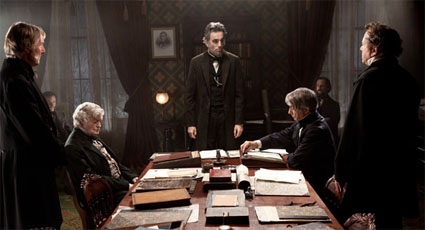 And, in that sense, this film reminded me of Alan Parker's "Mississippi Burning" (1988), being a dramatic film about Civil Rights activists, while most of the African Americans in the film were secondary characters bearing very little strength of personality. Here, in "Lincoln," almost every single character is a White Male bursting with unique flavor, while all the African American characters are dimensionless portraits in humility. But, this is Hollywood.

Further, there are only a few women in the film. This is an observation more than a complaint, for the film invests most of its time in the 1860s political wrangling, which was a game of White Males of assorted styles of facial hair. Nevertheless, save for a few examples, Spielberg's women usually tend to be without dimension or substance anyways. Sally Field as Mrs. Lincoln, however, commands the gravitas of Golda Meir in his "Munich" (2005). Otherwise, there were only a few other women, apparently, in the whole nation at the time. 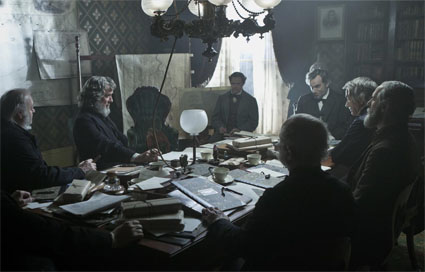 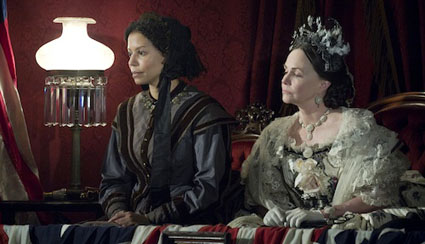 Thus, surrounding Lincoln are some flavorful characters, presented by some fabulous performances. I do not know what happened to Lincoln's Vice-Presidents, but David Straitharn as William Seward (Secretary of State) controls the screen. Meanwhile, James Spader as a Hobbit-like W.N. Bilbo, surreptitiously lobbies politicians for support. 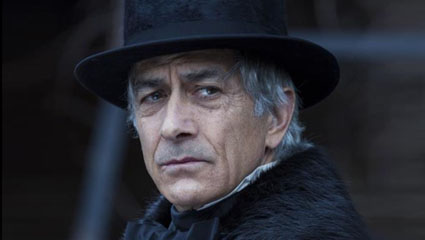 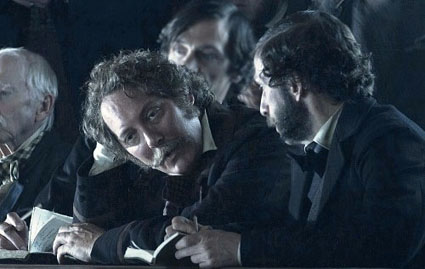 And, the film is expectedly dutiful. We have canonized Lincoln as our patron, followed up perhaps only by Dr. Martin Luther King, Jr. I personally regard Thomas Jefferson as one of the most brilliant minds of the past three hundred years, but even he does not receive the type of halo we place on Lincoln. In any case, it is not a surprise, then, that nearly every single conversation breaks into a moment of oratory. Imagine you are watching a period piece musical, where every character enunciates his or her words, and when the moment presents itself, he or she starts singing. The difference here is that, instead of singing, the characters seem to step up to the podium and pontificate. Again, this is not a criticism, for there is a joy in the eloquence. But, I wonder if people really spoke that way in that time. Still, as the film began with the Gettysburg Address, I recalled my childhood Social Studies assignment to memorize it, further recalling how pleasing the phrases were as they slid off the tip of my tongue. Shortly after watching the film, I had to go re-read the speech.

And, we have to wonder about the political goals of this film itself. I think it is interesting that the names of most of the people who opposed the 13th Amendment get shared, one by one. Their legacy is now one of opposing human rights, even though, as politicians, many were following the dictates of their team.

And, had this film been released five years earlier, its message would have been so different. It would have been a common, ambitious period piece about Lincoln and the Republican Party. But, there are multiple times in the film when characters speak - either in hope or in dread - about the further consequences of Slavery's abolition, including the right to vote, and the right or privilege to serve in higher ranks in American society. Perhaps it was unthinkable then that an African American man would someday be President. But, I suspect that each time a character went into such a monologue, so many of us in the audience were waiting for someone in the film to suggest that the 13th Amendment might someday make such a presidency possible. And, regardless of how much I might today criticize the man I am speaking of, the film reminded me how much I cried the night that it did happen.