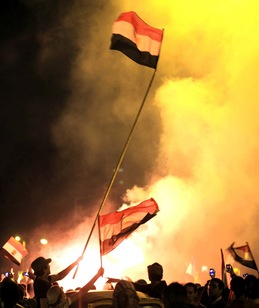 Today I walked the streets of Egypt proud--proud of my people and my country. It took us 18 days of protests to force Mubarak and his corrupt regime to resign. Their accounts will be frozen and the billions of dollars that should've gone into building a better and cleaner country will finally be restored for the good of our nation.

Mubarak left and we're all proud of getting rid of a corrupt dictator but it's the incidents I've witnessed with my own eyes throughout this revolution that has me swollen with pride. When Muslims prayed on a bridge, the police sprayed them with water and even though some slipped and fell, they stood back up and resumed. Egyptians of all religions were moved by this and when the water was pointed back at them, they created another front line of prayers. People kept coming in to reduce the impact of the water.

The following Friday Christians circled us Muslims during our prayers and protected us like human shields. On Sunday when the "Sunday of Martyrs" mass took place in Tahrir, Muslims did the same and protected them. Moments after, Christians and Muslims held hands and chanted in unity. Priests and sheikhs embraced each other and the thousands of observers were in tears of joy.

The days that followed were less intense but when Wael Ghoneim, the administrator of the Facebook group that called for a protest, was released by the police, he went on TV and asked not be regarded as a hero because he spent all the days in a dark room while the Egyptians took it to the street. When the host showed him a picture of all the martyrs, he broke into tears and sobs. Ghoneim got up and left afterwards, "I want to leave." Is what he said. He couldn't take it anymore.

The following day millions went to Tahrir to listen to his speech. He said more of the same but the importance is in the fact that he managed to re-energize the protesters. Hope was restored and strengthened. Tahrir Square was more like festival than anything else. With the absence of thugs, police and danger, Tahrir Square went from the most dangerous place to be at in Egypt to the most peaceful. People shared food, medical supplies and services. Tents were set up and protesters fought boredom with humor. Songs, jokes and signs circled the area and brought laughs and smiles to Egyptians all over the city. On Thursday, former (the sound of that makes me feel so good) President Mubarak announced that he would address the nation within an hour. 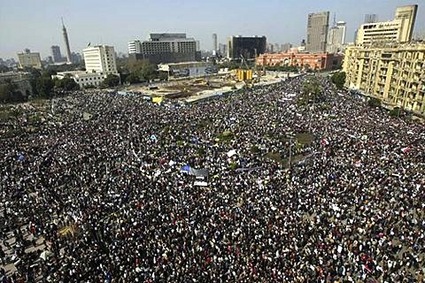 Typical of Mubarak it took him over an hour and a half to deliver the speech. Anticipation mounted and everyone was expecting the moment of truth, his resignation. I waited and waited and finally all he did was delegate some of his powers to Omar Suleiman. The crowds erupted in anger and truthfully I was so disappointed I called it a day to rest for the following day. Fridays were the turning points of this revolution. After prayer time people marched in large numbers and people were targeting the biggest protest yet, twenty million. One could see and hear protesters from anywhere in Cairo. The state television building was surrounded by disappointed, yet peaceful protesters. The crowds over at the presidential palace grew in numbers and Tahrir Square remained the heart of this movement. When Mubarak announced that he would address the nation again, nobody took it seriously. All hope was drained from the night before. In many ways Friday was the complete opposite of Thursday in that instead of disappointment we were all surprised when he resigned and the helicopters took off from the palace.

To express the widespread rapture, euphoria and excitement is impossible. Every single Egyptian in Cairo at one point or another must have left his or her home and gone to celebrate in Tahrir square. Women, children and men of all ages were chanting in joyfulness. I saw so many of my friends and cousins randomly. Without the exchange of words we rushed towards each other and hugged in celebration. People then started hugging each other regardless of being related or knowing one another. Strangers took strangers into their arms and congratulated one another.

Cars were honking their horns all over the city, and as I walked back home with my brother I met two friends. We told them how amazing it was in Tahrir Square as told them to go there faster when suddenly the sound of a car crashing into a civilian alarmed everyone standing. We all gathered around the young man who smashed into the window of taxi, flipped into the air and landed on the street. For a moment everyone was silent. I thought he was dead and the taxi driver rushed out his seat to make sure the young boy was fine. After laying still for a moment or two, he looked up and shouted "Unfortunately I'm not a martyr but EGYPT IS FREE!" Everyone laughed and cheered. The taxi driver carried him and drove him to a nearby hospital; both were smiling as they left. That's how happy everyone was broken bones weren't enough to kill the bliss of the night.

No one knows what will happen next and it feels so good. I'm sick of the predictability of the regime and at last we are in charge of our own destiny. I'm so proud to be Egyptian. I'm proud of my people and my country. I'm proud of the support from all the foreigners I know. We made it, not through violence but through unity, harmony and peace. May the rest of the world act the same way and remember that we're all human beings longing for happiness regardless of religion, race or nationality. I'll go to bed now so I can wake up early and clean the streets with my fellow countrymen. Egypt is reborn. Good night. At last I'll sleep knowing I'll wake up a free Egyptian.

Wael Khairy is a young Egyptian film critic and a Far-Flung Correspondent at RogerEbert.com Both photos by Associated Press. The Sun-Times is an AP member.  At Ebertfest 2010: Wael Khairy, writer-director Charlie Kaufman, and Grace Wang of Toronto, another correspondent for my site. 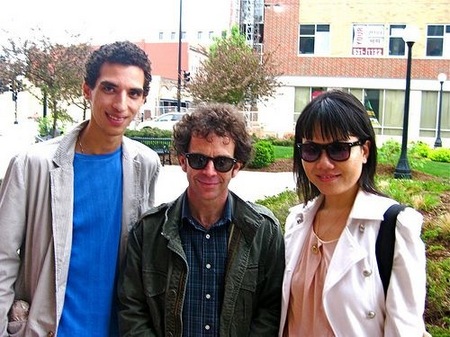 At Ebertfest 2010: Wael Khairy, writer-director Charlie Kaufman, and Grace Wang of Toronto, another correspondent for my site.