A Guidebook to People Power 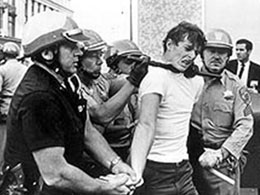 Do we teach our young people to dream in the way we used to dream? I feel a sadness as I look at the long faces of so many undergrads. In their expressions, there is a resignation towards, rather, a skepticism of, rather, a fear of the murky future. Have we lost the motivation, passion and, yes, romance of our counterparts from the 1960s, believing that with enough determination we could change the world into a better place?

Watching Mark Kitchell's "Berkeley in the Sixties," (1990) I'm thinking the contrary, that maybe things have not changed. We might look at the activism of the 1960s with nostalgia, thinking that the activists knew exactly what they were doing, but we see that the participants were discovering the process as it unfolded before them. In any case, this is one of the great documentaries of American dissent.

This lively documentary focuses on political activism as it developed on the campus of the University of California at Berkeley, later following its ripples into bigger causes. It presents itself as a chronicle of attitudes and personalities, but more than that, it is a portrait. It is a portrait of a small group of students curiously discovering a world outside of textbooks. The stone at the center of the pond is the 1960 dissent against the House Un-American Activities Committee (HUAC). Police fired hoses at the students. These students contend that the event would have come and gone, except that the House released a film called "Operation Abolition." When this film was screened on campuses, it was received with opposition, protesting the assertion that opposition to the government was somehow un-American. Thus, in hindsight, these activists look at that moment of being hosed at Berkeley as a moment of political baptism. 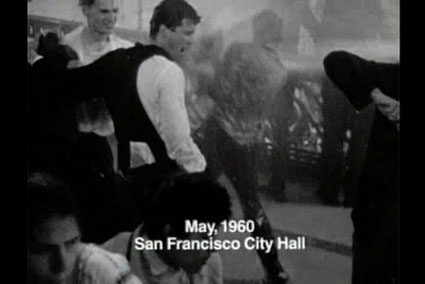 Berkeley's campus claimed to be the largest of America's public "knowledge factories," dedicated to serving America. As the students began to get more politically active, the administration began prohibiting any involvement in off campus politics. The students, however, increasingly involved themselves in local Civil Rights causes. These activists were mostly upper-middleclass college students commenting that for the first times in their educational careers, they were doing something that gave them meaning. The found their own high level in-class education as a pathway to irrelevance in society and now were reaching out to the world beyond. They were idealistic and curious. They were surprised by the deceit of their local authorities, discovering through further activism that corruption is a problem of power at all levels. And, they were discovering that by taking the Constitution seriously, they could change society and history. 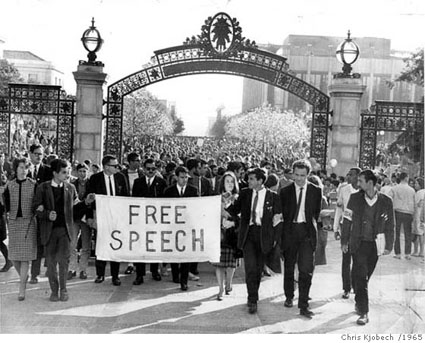 Their pursuit expanded to oppositions against the war in Vietnam. Mainstream media presented the war as a project supported by national consensus, and these young people discovered that not only was the consensus manufactured, but that the news reports were withholding much information about our problems and contradictions in the effort. For us in 2012, in our era of media overload, excessive communication and national cynicism, the young people of the 1960s discovered what we would consider obvious; they seem almost naïve about it. But, theirs was an era of small black and white televisions and AM radios, just having exhibited the 1950s Happy Days (following the end of World War 2). Still, considering that institutional forces are now pushing for war on Iran; maybe that generation was not any more naïve than we are. In any case, as they expanded their explorations in dissent, their idealisms were never shattered, but they were instead refined and further refined.

From there, we follow the development of a large generational culture of alienation. From the outside in, it was a counter culture of psychedelic, free love hippies. From the inside, it was a culture of young people dissatisfied with the seemingly hypocritical methods of their parents, seeking to live life on their own nonviolent terms. Meaning, the generation of the hippies was the product of a generation gap. The symbol of the old guard was the rising California politician, Ronald Reagan. 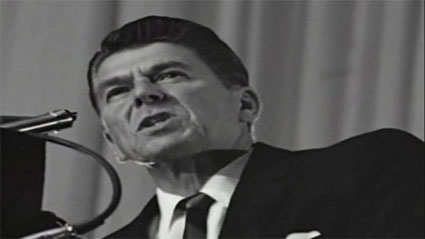 As they grew, they also discovered that their nonviolent methods were becoming less effective. The documentary shifts to the rise of the Black Panthers, and the way it captured the imaginations of the radical left, especially with the way the Panthers presented themselves on camera. Interestingly, when Bobby Seale appears on screen, he speaks of the initial rise of the Black Panthers in Berkeley: they went to a Chinese bookstore, purchased copies of Mao Tse Tung's "Red Book" for twenty cents, and sold them for a dollar each, raising a few hundred dollars for the purchase of two shotguns. But, they had not yet read the book. The point here is that the Panthers first grew by capitalist means selling communist literature. 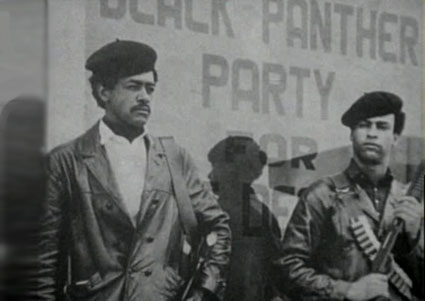 While the Panthers are presented as a non-violent group off camera and as a militant group on camera, we see other activists turning violent and turning over cars. Then, at the end we return to the Berkeley campus. Activists take control of a local "People's Park," trying to convert it into a commune. Soon, campus bulldozers arrive, seizing the property.

The interesting point about this film is that the film unabashedly takes sides. It romantically dedicates itself to the activists against the authority figures (politicians, institutions, and especially police officers). Speeches are voiceovers against clips of police barricades and violence. The soundtrack features classic songs of the era. There is definitely some self-criticism, especially against the Black Panthers' carrying shotguns, and the Berkeley activists resorting to violence. Still, most of the activists present themselves as innocent, curious, and harmless, yet repeatedly surprised by their discoveries of the world, the life-giving dedication of their counterparts in other struggles, and the effectiveness of their efforts. 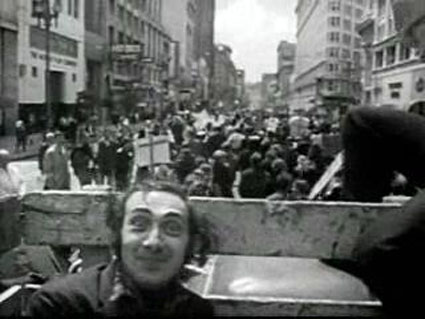 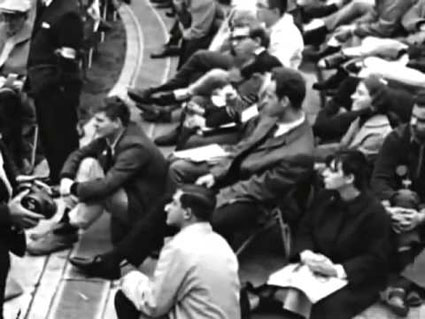 So, in this film, the best way to describe the protesters is not that they were inspired, determined, or even selfless. They may have been all of those things. Rather, they were simply inquisitive about what the world offered them, and what they could do in it. There is an innocence in them, even in their contemporary interviews. Protesters are often idealistic, but these protesters are primarily curious.

I was glued to the internet this past weekend, watching photos, clips, tweets, and headlines about the protests against the NATO meeting in Chicago. I know I had students in the crowd, on both sides of the confrontation. I'm sure that some of my undergrad students were there, with dedicated ambitions for social justice, ready to jump in harm's way, in contrast to their fear-infested classmates. I'm sure some of my Chicago Police Officer students were also there, seeking to keep the peace without incident. As far as I'm concerned, both sides are doing their jobs, while the NATO leaders continue to play with the fleeting quantities of American and European cash while dropping bombs on third world civilians. More importantly, watching the footage from this weekend, I'm amazed that the photos look exactly like the photos from this movie. 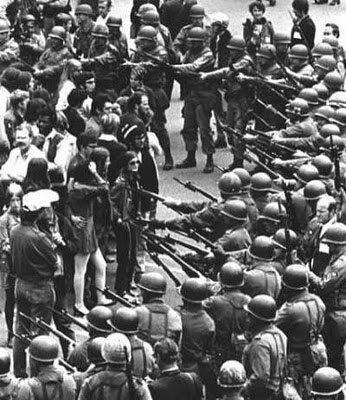 Taking this last point further, I'm thinking about how much things have changed and how much things have not changed. For when it was released, "Berkeley in the Sixties" was rather revolutionary. Even though this film was produced in the latter years of our deep romanticism of the 1960s, a film like this would have remained on the fringes of the independent circuit. But, this film was nominated for an Oscar, losing to another protest documentary, "American Dream" by Barbara Kopple. It was in the next year that we saw Oliver Stone's "JFK" and in the year after that that we watched Spike Lee's "Malcolm X."

But, things have also remained the same. The political Right still presents itself as the authentic patriots, while the Left looks at itself as the voice of American ideals. The authorities present the activists as filthy, dirty lunatics, while the activists see the authorities as well-dressed hypocrites. Peace Signs are just as prevalent now as they were then, if not more so. Back then, we had Vietnam. Now, we have the so-called Global War on Terror. Then, we had COINTELPRO and now we have the PATRIOT Act. Then, we had Senator McCarthy and his HUAC chasing after communists, and now with have Rep. Peter King and his Radicalization Hearings. Perhaps the only thing missing now are the heroes, but I suppose that they weren't heroes then. The fashions seem the same. The ambitions seem the same. Maybe the mistake we have handed those undergrads who are graduating with diplomas and fear is that we forgot to challenge them to open their eyes and see where their curiosity leads them. Because, in sum, this movie is unexpectedly about the subversive thrill of curiosity, the joys of unity, and the exhilaration of self-determination, when faced against restrictions of power-brokers masking themselves behind illusions of social stability. Again, protesters are often presented as stubborn idealists, but at the core, these young Americans were just plain curious, and believed in America so much that they were willing to take any and all risks to improve it.