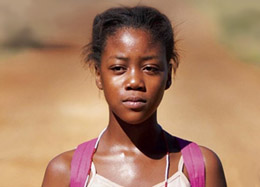 Looking back at when I watched "Life, Above All" (2010) last December, I discern that I'm a more jaded person than I think. At one point in the story, I wondered if its heroine really had to do what she was determined to do. I understood her motive, but I thought it might be better for her and her family to leave the problem alone because there was really nothing she could do for changing the circumstance. However, it was what should have been done, her heart knew that, and I was eventually moved by her determination while recognizing that she was right after all.

"Life, Above All" is available from Vudu, or can be purchased on DVD and streaming from Amazon Instant Video.

"Life, Above All" is a drama based on specific places and people on the surface, but its power comes from the universal aspects of the human life inside its specificities. While being basically a familiar story of a young but resilient girl who has to go through hardships by herself while holding her family together, it tells us about the ramifications caused by AIDS, a disease the people seldom mention in the movie, and the pain inflicted on individuals. 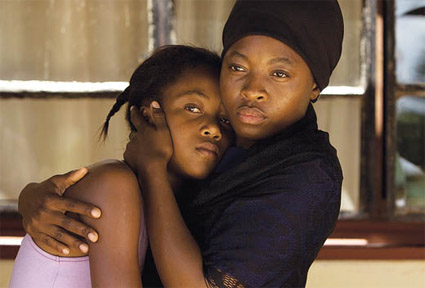 Life has become recently more difficult for Chanda (Khomotso Manyaka), a young girl living in a rural town near Johannesburg in South Africa. Chanda's mother Lillian (Lerato Mvelase) is so devastated about her baby daughter Sarah's death that it is Chanda's job to take care of this sad family affair. Besides notifying her mother's family of the funeral to be held and hiding Sarah's death from her half-siblings, Chanda also has to visit a local mortician to select a nice little coffin for her deceased sister. Compared to this unenviable task, taking stolen money back from her stepfather hanging at the local bar looks like an easy task.

With the help from Mrs. Tafa (Harriet Manamela), Lillian's close friend and neighbour living next to Chanda's house, the funeral is conducted well, with the town people offering condolences and support to her family--except for one of Lillian's relatives still stern to Lillian because of her disobedience in the past. Yet it seems the people have heard something bad about Chanda's family and talk about it behind their backs. Though it looks like everyone accepts that Sarah died of influenza, they believe, that there is another cause which they do not want to talk about openly. 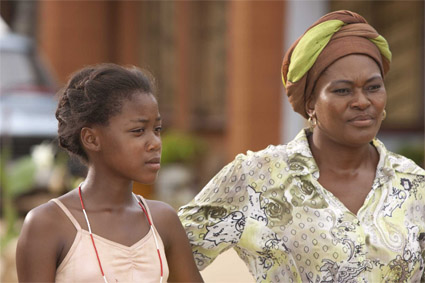 Anyway, life goes on - for a while. Lillian gains her strength back, but it is becoming more apparent day by day that she is getting weaker. There are several black spots on her legs. It goes without saying that she needs to see a doctor, but she does not want that, and the neighbours are already suspicious about what's going. 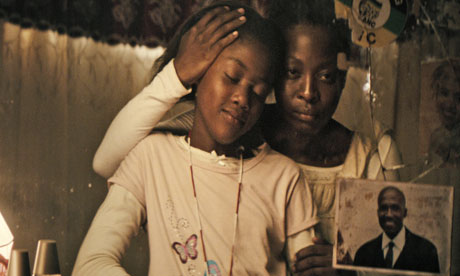 If you have common medical knowledge, you will immediately recognize what is happening, even though most of the characters in the film do not mention about AIDS. AIDS has been one of the biggest social problems in South Africa since the 1990s, and it has reached the epidemic level due to the ridiculous AIDS denialism prevalent around high-ranking government officials including former president Thabo Mbeki.

When I checked Wikipedia for more information about AIDS denialism, I found it is as hilarious as global warming denialism (one magazine devoted to AIDS denialism was shut down because all of its editors died of... you know). This is not a laughing matter, considering that it is estimated that around 365,000 people have died in South Africa because they did not get the access to anti-retroviral treatments thanks to Mbeki's misguided belief. After Mbeki's resignation, the South African government's policy on AIDS has been changed, but the recent report from South African Institute for Race Relations (SAIRR) says there will be around 6 million HIV carriers in South Africa in 2015 (The current population of South Africa is around 50.6 million, by the way).

While never emphasizing the social issue it deals with, the movie shows how the lack of knowledge on HIV causes damages not only to the patients themselves but also to their families. They can be stigmatized and ostracized by the community, and Chanda knows that well through her close friend Esther (Keaobaka Makanyane). One of the sad tragedies caused by AIDS in South Africa is that many young children are left without parents and then most of them resort to making a living through prostitution, which will inevitably expose them to HIV. In a sad scene where Chanda discovers that what the adults say about Esther is true, both are well aware of what can happen, but there is a hard reality they cannot deny. 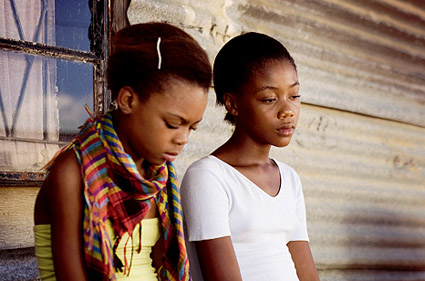 The movie is based on Allan Stratton's acclaimed young adult novel "Chanda's Secret", and the director Oliver Schmitz gives his story the realistic atmosphere of a rural South African town with unforced natural beauty. The sense of community is clearly conveyed through the people in front of the camera. Chanda's house looks plain and shabby at first, but it is not as bad as you think, and, judging from the exterior of the other houses including Mrs. Tafa's, this is a relatively nice middle-class neighbourhood where they help their poor neighbours if that is required. However, there is also the dark side fueled by fear and superstition about AIDS, and it is sometimes quite ominous even though people do not say much but stare at Chanda's house. 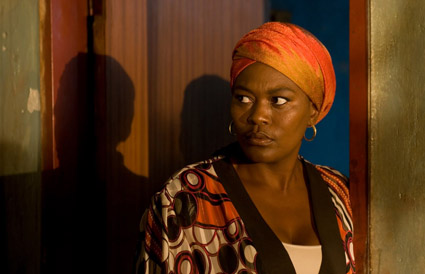 The cinematographer Bernhard Jasper's handheld digital camera stays near Chanda while never calling attention to itself. While gradually getting to know the situation surrounding her, we come to see the story through Chanda's view, and the remarkable performance by a young actress Khomotso Manyaka grips our attention to the story. While there is some naivety inside her, Chanda is smart and resilient enough to take care of her family instead of her sick mother and absent stepfather. She is certainly not fooled by the doctor who has probably extorted money from many illiterate patients while impressing them with his "degrees," and the way they negotiate implicitly in front of other characters is one of few humorous spots in the drama.

It must have been a difficult job for Manyaka because she has to carry the movie throughout the film as the lead actress, but she looks quite natural while never overplaying the emotions behind her disinterested face. I heard from others that Manyaka is a lot different from her character, and that reminds me of when I recently watched a small South Korean indie film "Lovable" (2011). I remember how much I was shocked to realize that its lead child actress, who played an autistic character authentically, was actually a charming ordinary girl. I know we also have to give lots of credit to the good directors who are able to pull the good performances from their young performers, but it is always amazing to see what they do in front of the camera.

The movie also has equally good acting by Keaobaka Makanyane, who is believable as Chanda's best friend Esther. Esther does not like what she has to do for a living, but there is not any other option available to her, and, in one brief but sorrowful shot, she barely hides her desperation with a forced smile while approaching her potential 'client." Through the performances by Manyaka and Makanyane, the bond between their characters feels palpable; there is a moment when their relationship is strained, but each remains the best friend of the other. When Esther is in a dire situation, Chanda has no hesitation about helping her and that act propels Chanda to do what she thinks should be done for her mother--no matter what other people think. 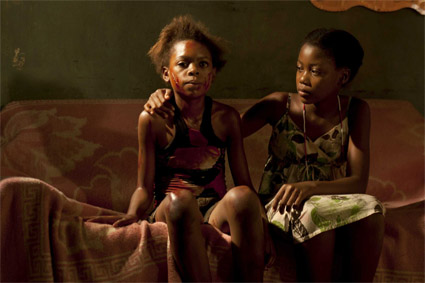 Lerato Mvelase is good as the gentle mother who worries more about her children than herself even when she gets sicker. Harriet Manamela is memorable as Mrs. Tafa, who is the most interesting and complex supporting character in the story. In some way, the movie is also her story, and we can feel her drama turning its wheels near Chanda's. Mrs. Tafa is sometimes abrasive or oppressive to Chanda, but she is a kind woman with good intentions who happens to collide with Chanda due to their difference of the opinions. Though she's scornful of Esther, it's implied that she may understand the friendship between Chanda and Esther although she openly disapproves of it. After all, their relationship is not that different from that long friendship between her and Lillian.

As a good friend, Mrs. Tafa does whatever she can to help Lillian, but she has stayed within her lines. She is afraid of being associated with her friend's disease, and she hides a related truth about her deceased son. However, finally, there comes the crucial time for her to decide whether to act or not, and, in a calm but dramatic moment, she makes a brave choice of standing by Chanda in front of the town people gathering like a lynching mob in front of Chanda's house. Instead of standing on a soap box, she persuades them in a practical way which would be appreciated by J. Edgar Hoover. 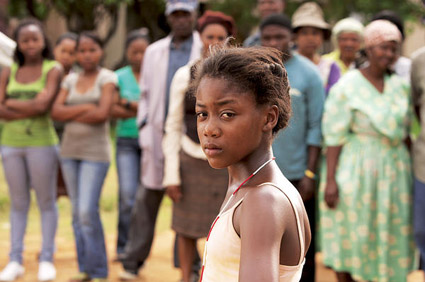 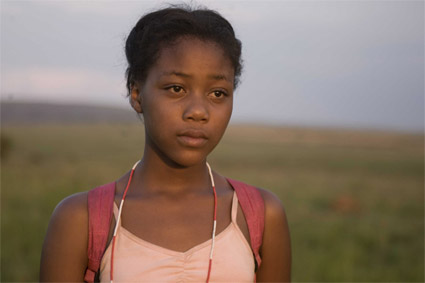 "Life, Above All" is a powerful universal drama about how its human characters struggle through specific hardships. Like many other good dramas with social issues, it draws us into the story and the characters first, and then it makes us think about the problems presented on the screen afterward. Its last scene is rather implausible in contrast to its vivid realism but somehow it feels right in its story. It is warm and optimistic, but the camera eventually focuses on Chanda's eyes which still look weary even with a little ray of hope. Her latest struggle with the world is over, but there will be another hard time for her and her family, and she knows that. And so do other Chandas in the world.