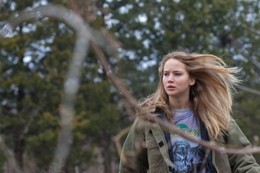 There was a moment in "Winter's Bone" when I felt sheer horror triggering my heart to thump in loud heavy beats. A moment more haunting and terrifying than anything I've seen all year. Not since the gas station scene in "No Country for Old Men" and the French vanilla ice-cream desert in "Inglourious Basterds" have I held my breath for so long. It is what I like to call a pulse-raiser scene, one of those moments when you really want to look away but you simply can't because you care too much for the victim.

It's not because of violence or the overused silence before a jump-out-of-your seat moment; it's when you actually fear for the character on screen, it's when the horror of a situation feels so real we are transported through time and space to share the moment of dreadfulness with our unfortunate protagonist. Such moments are rare for they require everything from the performances, the shots, the music and composition to be in perfect synchronization.

When such a scene comes along every two three years, for the briefest of moments the viewer becomes so involved, it's like the director went beyond film projection and injects the viewer with the streaming high pressured blood cells of the subject at risk. Without spoiling the scene for you, it's the shot after our heroine gets dragged into an old barn and we helplessly watch the garage door slowly shutting down. At that particular moment, hope felt nonexistent. 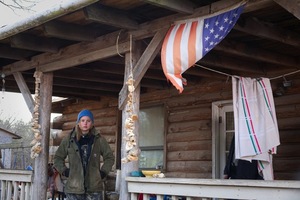 Director Debra Granik follows in the footsteps of great female directors like Sofia Coppola ("Lost in Translation") and Kathryn Bigelow ("The Hurt Locker") to prove the capabilities of the new age of fearless directors and to reassure us cinephiles that the dancing flame that is pure cinema still flickers. "Winter's Bone" is a dead serious southern tale with enough bleakness in the atmosphere to cast a big shadow over the little hope we have for our struggling-to-get-back-on-her-feet heroine.

Jennifer Lawrence delivers an Oscar worthy performance as Ree Dolly, a 17 year old girl struggling to survive on poverty stricken soil. The lonely young girl is wise, smart and mature for her age. Evident in her eyes, motionless gestures and heartrending postures is a sad beaten down soul trying to keep her family intact. After her meth cooking father disappears and misses the court date of a drug arrest, a police officer pays Ree a visit to inform her that unless her father doesn't show up soon, the house which is also the thin thread keeping the broken family together will be taken away from her. The dangerous search begins as Dolly goes around town asking both friends and foes for the whereabouts of her father. 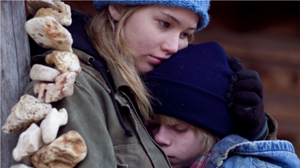 As time flies, Dolly finds it harder to feed her siblings. In one particular memorable scene they go hunting for a deer and end up catching two squirrels instead. After they skin the first squirrel and Dolly asks her younger brother Sonny to stick his fingers in it to empty the insides of the rodent, he asks her "Do we eat these parts?" and her heartbreaking response shows us the reality of her situation- "Not yet." She replies."Winter's Bone" is one of those rare cases when the entire cast delivers above average performances. Besides Lawrence's strong lead performance, the two other performances that stood out for me as award worthy are John Hawkes as her tough skinny uncle, Teardrop and Dale Dickey as Merab, a woman who despite roughening Dolly up I couldn't help but notice how she felt sympathy towards our protagonist. There's no room for paper-thin characters for the individuals in this gritty tale are real human beings with layers of emotions and character. 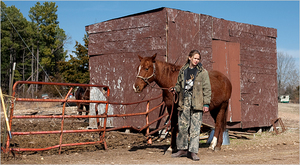 Midway through the picture, Granik went for a very artistic black and white scene in which squirrels run up and down trees while the sound of a thundering chainsaw threatens their habitat. The symbolism is very clear as the situation mirrors Dolly's probable loss of her house. The next time we hear the noisy screeching of a chainsaw is during a final scene that will most probably linger with you long after the end credits roll. Waste no time and watch "Winter's Bone," one of the best and most haunting films of the year.   Debra Granik receives her Sundance "best film" award from Parker Posey 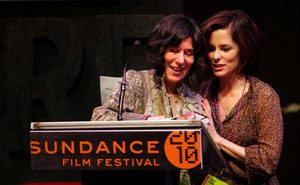