I’ve always been a sucker for mysteries that use their locations as not just backdrops but practically as characters in the narrative. Think about how David Lynch used the Pacific Northwest in the first season of “Twin Peaks”; the importance of location in “The Bridge”; the always-gloomy overheads of “The Killing”; even the hot edge-of-insanity of Miami in “Dexter” became essential to the tone of that show. One of the best elements of Hulu’s “Cardinal,” imported from its original Canadian airing, where it was quite a hit, is the use of the cold, barren wastelands of the small town in which it is set. You can feel the chill in the bone of the title character, bitter cop John Cardinal, played well by TV veteran Billy Campbell. Sadly, setting and character only get a mystery so far and the actual whodunit of this adaptation of the first in a series of hit novels never really engages beyond its tropes. The show has reportedly already been renewed for multiple seasons and the two leads are interesting enough to keep me hopeful that future installments could improve on the flaws of this one. 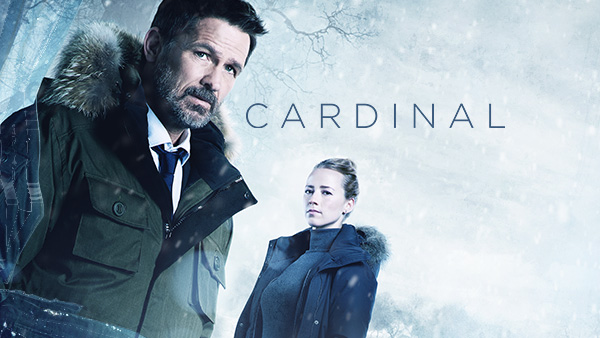 Campbell, so great on “Once and Again” and “The Killing,” finds the remorseful center of anti-hero John Cardinal, a man who greets every day with a somber sigh. The six-episode season opens with the discovery of the frozen, murdered body of a missing First Nations girl, who we quickly learn that Cardinal was virtually obsessed with finding, to the point that he was shunned from the homicide squad when he wouldn’t let it go and join the consensus that she was merely a runaway. So, immediately we’re set up with a dynamic in which we know John Cardinal is the not only the smartest cop in town but the least likely to give up on a case.

Of course, Cardinal is partnered with the new woman on the squad, Lise Delorme (Karine Vanasse), who is relatively quickly revealed to be more than she first appears. It turns out that both Cardinal and Delorme have a few secrets, and then “Cardinal” gains a third POV when we end up spending time with the killers before the halfway point of the season, turning the show into something akin to “The Silence of the Lambs,” which the book was reportedly compared to on its release.

If you’re thinking, “wow, that’s a tough thing to pull off,” you’re not wrong. Meeting Buffalo Bill at the end of Demme’s masterpiece added to the tension already built up in the scenes between Clarice Starling and Hannibal Lecter. Imagine spending a great deal of time with the serial killer with a girl in a hole who needs to put the lotion in the basket or get the hose again. “Cardinal” makes the great mistake of devolving into torture porn, making us witness to the kind of insanity that most people don’t even read about much less see. It also diffuses the perspective of a show like this one by jumping from Cardinal’s story to Delorme’s to the criminals they’re trying to catch. It’s the kind of narrative-hopping that could work chapter to chapter in a book but feels unfocused in a TV show. It also doesn’t help that “Cardinal” often pulls from years of cop show clichés in ways that almost approach parody. Most of all, why does it always sound like John Cardinal is whispering?

And yet there within the clichés and outside of the torture subplot, there are elements of “Cardinal” that hooked this mystery junkie. Again, I love a piece that feels like it couldn’t take place anywhere else, and this show sometimes reminded me of the great 1997 Norwegian film “Insomnia” (remade by Christopher Nolan in 2002) and the upcoming cold-weather thriller “Wind River.” You can feel the chill in your bones. Even in the dog days of summer.

Next Article: Syfy's "Blood Drive" is a "Grindhouse" for the DTV Era Previous Article: Criterion’s “World Cinema Project, Vol. 2” Offers a Film Class in a Box