Who Is This Man?: Profiles and Interviews

Roger Ebert, we can safely say, was the most-written-about film critic in the world. Journalists loved to interview him and write about him. And Roger loved to talk, so he was an interviewer's dream. -- The Editors

Chris Jones of Esquire wrote a remarkable profile that for many readers offered the first real glimpse into his life after his voice was taken from him:

"Now everything he says must be written, either first on his laptop and funneled through speakers or, as he usually prefers, on some kind of paper. His new life is lived through Times New Roman and chicken scratch. So many words, so much writing—it’s like a kind of explosion is taking place on the second floor of his brownstone. It’s not the food or the drink he worries about anymore—
Advertisement
I went thru a period when I obsessed about root beer + Steak + Shake malts, he writes on a blue Post-it note—but how many more words he can get out in the time he has left. In this living room, lined with thousands more books, words are the single most valuable thing in the world. They are gold bricks. Here idle chatter doesn’t exist; that would be like lighting cigars with hundred-dollar bills. Here there are only sentences and paragraphs divided by section breaks. Every word has meaning."

Roger appeared on Fresh Air with Terry Gross several times over the years. When he passed away, they put together a lovely compilation of excerpts from his appearances. Later this week, we'll have a special treat from the good people at Fresh Air: The complete audio from Roger's 1984 interview with Terry Gross, which is not currently available online. 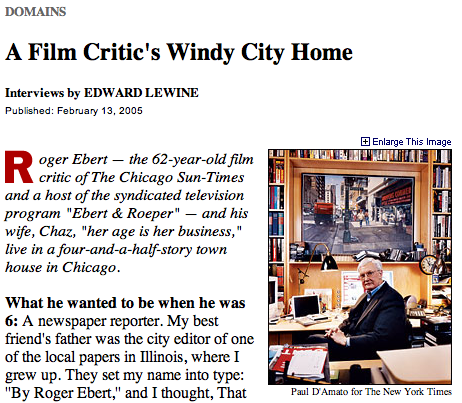 The New York Times Magazine visited Roger at home for this memorable look at how a critic lives:

"Writing uniform: Sweatpants, a sweatshirt and my slippers. I've worn the same pair of slippers for 20 years. Apparently they are indestructible. I don't know where I got them, or how I would replace them if they were lost or broken. But they are fabulous.

The house's best feature: We have a four-story atrium with three gigantic abstract paintings by Gillian Ayres, a British artist whose work we like.

Question he's asked most: How many movies do you see a week? Every film critic would say the same thing. We all get asked that. The answer is, about 10, but at a festival it could be 20 or 30. 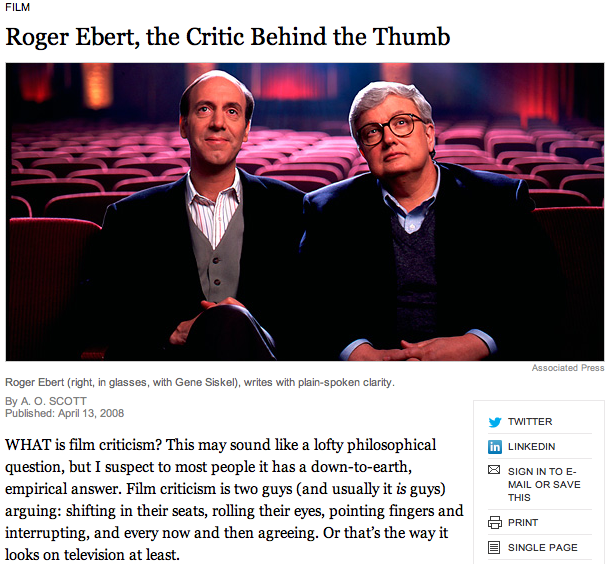 In 2008, A.O. Scott wrote about developments in Roger's career, and turned that into an excuse to muse on Roger. It's not exactly a profile, but we think Scott had a lot of essential insights here:

"For his loyal readers Mr. Ebert’s resumption of reviewing (April 1 happened to be the 41st anniversary of his debut in The Sun-Times) is a chance to pick up an interrupted conversation. For those who labor beside or behind him in the vineyards of criticism it is an incitement to quit grousing and pick up the pace. Not that any of us could hope to match his productivity. Nor could we entertain the comforting fantasy that the daunting quantity of the man’s work — four decades of something like six reviews a week, as well as festival reports, learned essays on classic films and the occasional profile — must entail a compromise in quality."

Roger talked to Publishers Weekly about his book The Great Movies:

"PW: What sets this book apart from other film books?

RE: These essays are about my experience in looking at the movies. I talk about seeing City Lights for the first time in the Piazza San Marco in Venice, watching Chaplin coming out on the balcony; and seeing The Third Man in a little theater in Paris when I was a kid on vacation in Europe for the first time. Movies don't exist in a vacuum. They exist as a relationship between our mind and the screen. When we saw it, who we were and what was going is very important."

Ty Burr of the Boston Globe brought a fellow critic's sensibility to his interview with Roger:

"Q. I had no idea you almost became a priest (if your mother had had her way, at least). Do the skill sets of the clergy and a film critic have any overlap? An ability to distinguish between venial and mortal sins, perhaps?

A. That’s intriguing. I feel certain films are almost a form of shared prayer by director and audience. And it is good for both clerics and critics to remember with Paul, “And now abideth faith, hope, charity, these three; but the greatest of these is charity.’’ Critics also need a lot of faith and hope."