In 1949, World War II had been over for four years, but a different war was brewing. The government of the Republic of China had fled to Taiwan, leaving behind Mao Tse-dong and his Red Army to form the People's Republic of China. Former war hero, Harry S. Truman was sworn in for his second term as President in January. Arthur Miller's tragedy Death of a Salesman opened on Broadway, examining the American dream while Rodgers and Hammerstein's "South Pacific" took on racism beyond black and white. In Europe, East Germany established itself as the Democratic Republic of Germany and the Soviet Union tested an atomic bomb. The Greek Civil War ended with a Communist surrender.

In England, the formidable Margaret Roberts became a Conservative candidate and George Orwell's dystopian novel, Nineteen Eighty-Four, is published. The book has been both a theatrical play and a movie. Two feature films have been made—in 1956 and another in 1984 (as well as several TV movies). The latter came to the US in 1985 and is being playing next week in theaters, on April 4, a crucial date for the protagonist of this tale.

As Roger Ebert said about the film: "George Orwell made no secret of the fact that his novel 1984 was not really about the future but about the very time he wrote it in, the bleak years after World War II when England shivered in poverty and hunger. In a novel where passion is depicted as a crime, the greatest passion is expressed, not for sex, but for contraband strawberry jam, coffee, and chocolate. What Orwell feared, when he wrote his novel in 1948, was that Hitlerism, Stalinism, centralism, and conformity would catch hold and turn the world into a totalitarian prison camp. It is hard, looking around the globe, to say that he was altogether wrong."

When the first movie came out, Orwell was already dead, dying at the beginning of 1950. He was only 46. He would never see the influence of his novels on the world. The first movie was black and white, in more ways than one. Ebert found it simplistic. 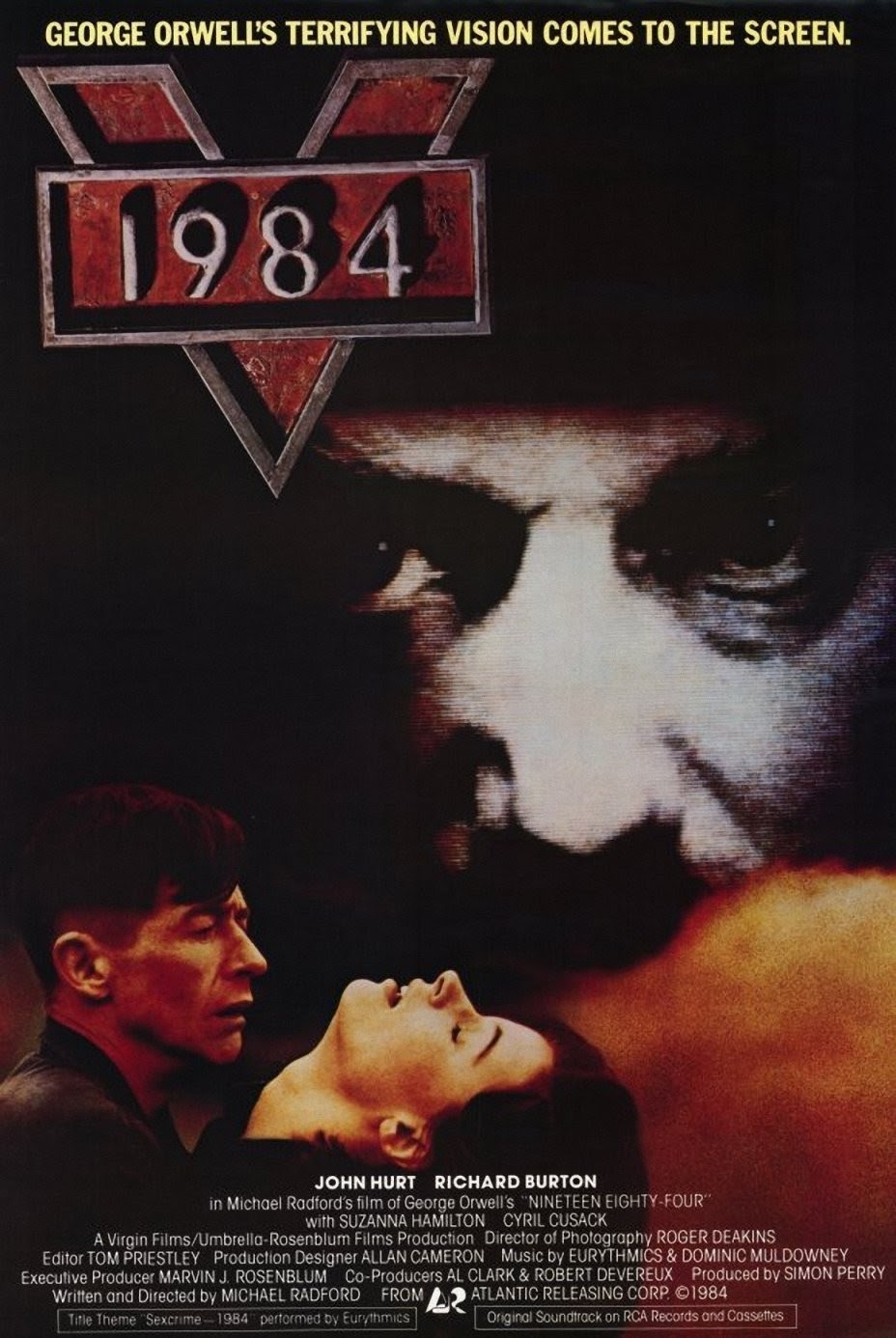 Yet of the second movie, Ebert wrote: "What is remarkable about the movie is how completely it satisfied my feelings about the book; the movie looks, feels, and almost tastes and smells like Orwell's bleak and angry vision. John Hurt, with his scrawny body and lined and weary face, makes the perfect Winston Smith; and Richard Burton, looking so old and weary in this film that it is little wonder he died soon after finishing it, is the immensely cynical O'Brien, who feels close to people only while he is torturing them. Suzanna Hamilton is Julia, a fierce little war orphan whose rebellion is basically inspired by her hungers."

What Orwell did not foresee was the birth control pill, but in some ways, he predicted Communist China's one child policy that was instituted in 1979. He also foresaw the desperate grayness of lives under communist regimes that had only just begin at the time of his death.

It is from "1984" we get phrases like Big Brother, Room 101, Thought Police, Thoughtcrime, Unperson, Memory Hole, Doublethink and Newspeak. Big Brother is a symbolic figure head that places every citizen under constant surveillance via telescreens. Citizens are constantly reminded that "Big Brother is watching."

Hitler and Stalin had already demonstrated how to Unperson people for various reasons. That tradition wasn't unknown under dictators and military regimes of the past and continued forward. But in the 1980s, reality TV hadn't reached its catty stride with tremendous viewership quite yet. (Remember the sweet innocence of the 1948 "Candid Camera"?)

In the year 1984, Apple Computer had just placed a Macintosh personal computer on sale. The TED conference was founded the same year. Ronald Reagan was president and visited his ancestral home in the Republic of Ireland. Los Angeles was hosting the Summer Olympics that year and by the fall, Reagan won his second term.

By this time, the Red Scare of the 1950s was over, but political Star Wars was not. The blue sea of Mao uniforms is echoed in the workers' costumes in Radford's movie. Introduced in 1949, the unflattering tunic suits became popular among European socialists in the 1960s and 1970s. At the time of the book's publication, the Berlin Wall had yet to be constructed. But, in 1989, the wall came tumbling down. The bleak despair of communism was changing from within.

Ebert wrote, "Radford's style in the movie is an interesting experiment. Like Chaplin in 'Modern Times,' he uses passages of dialogue that are not meant to be understood—nonsense words and phrases, garbled as they are transmitted over Big Brother's primitive TV, and yet listened to no more or less urgently than the messages that say something. The 1954 film version of Orwell's novel turned it into a cautionary, simplistic science-fiction tale. This version penetrates much more deeply into the novel's heart of darkness." 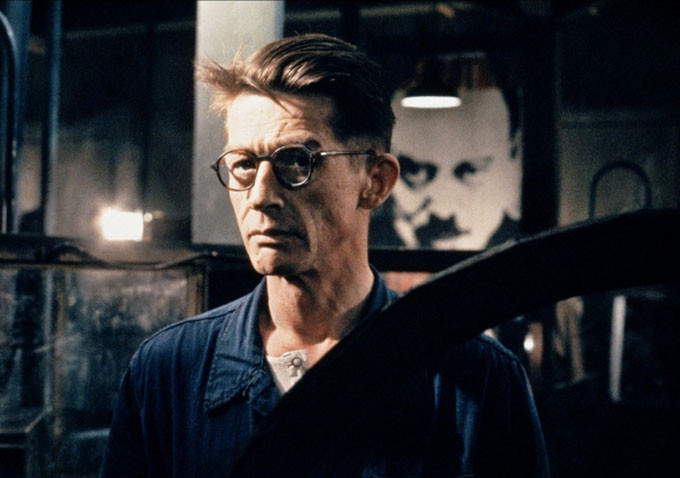 Where We Are Now

Looking at Radford's film now, in 2017, the past has come to the future. With smartphones, iPads and computer notebooks, that constantly ask our location, our movements are being monitored. Radford's vision of telescreens and cubicles are a steampunk version of the modern PC monitors in cubicles. The poverty and crushing mind-numbing grayness of socialism is not totally forgotten and communism continues, but reality is now manufactured and promoted by television in democratic nations.

From the molded reality moments, we now get our current president, Donald J. Trump. Four weeks into Trump's administration, Trumpian Newspeak gives us "alternative facts" to explain the visual comparison between a crowded National Mall for Obama's 2009 inauguration and the sparse crowd for Trump; all critical attacks on the president will be labeled "fake news" according to deputy assistant Sebastian Gorka and people who anger the president like Judge James Robart, will have their professional credentials questioned in a misuse of "so-called."

"So-called" is, according to Merriam-Webster used to describe something that is "commonly named" or "falsely or improperly so named." Robart not only really is a judge, he was appointed by the last Republican president, George W. Bush.

Merriam-Webster has been an active participant in this war of words, something that has been noted by Business Insider. Merriam-Webster has given pointed notes and rebuttals to the use and misuse of words as well as opportunities to learn new words like Götterdämmerung ("a collapse [as of a society or regime] marked by catastrophic violence and disorder"), claqueur ("a group hired to applaud at a performance") or snollygoster (a shrewd, unprincipled person").

Defining common words like "betrayal" became part of understanding the Trumpian logic. According to the White House, Sally Yates “has betrayed the Department of Justice by refusing to enforce a legal order designed to protect the citizens of the United States.” White House press secretary Sean Spicer called it "clearly a betrayal."

A business decision by a department store without any political stance becomes an "attack" upon the president and his daughter, Ivanka. The tendency to describe things in terms of almost feudalistic relationships of loyalty puts each citizen at war with another.

One broadcast journalist was so flustered he declared of Trump, "What does it mean when he says words?"

Because of Trump's rise to the presidency, Orwell's 1984 has become a best-seller again. The Daily Beast writer Michael Weiss feels "No, Trump Is Not Like Orwell's '1984'" but the New Yorker's Adam Gopnik, who never liked Orwell's novel has an apology and puts forth what Orwell got right in "Orwell's '1984' and Trump's America."

Trump's America does have something in common with the sea of white faces in Radford's film. Trump was supported by the Ku Klux Klan, something that he didn't, as President-Elect, disavow. Orwell wrote at a time when India and China had been major allies of Great Britain and immigration had already created a Chinatown in London and brought curry to the UK. Yet Radford's vision of a white Ingsoc (English Socialism) makes it easier to imagine how the hordes of East Asia could be threatening, echoing Thatcher's infamous 1979 "swamped" speech about Asia (East and Central) during the very year (1984) that Thatcher was negotiating the return of Hong Kong to a Communist China.

The movie begins with the quote:

While communist regimes have attempted to re-write histories, so have democracies and democratic republics. Now, in real time, we can see history being re-written on social media. Trump attempts to take credit for the first pre-inaugural concert, something that Barack Obama did eight years ago. Intel gives Trump credit for a US factory that it announced under Obama. Trump blames Obama for the seven countries on his travel ban list. The numbers attending the inauguration becomes the numbers witnessing the inauguration by any medium. Trump sounds peevishly like Shakespeare's Petruchio in The Taming of the Shrew when he declares it did not rain during his inauguration speech.

Further, Trump declared that "Any negative polls are fake news, just like the CNN, ABC, NBC polls in the election." Trump followed that declaration with a link to "16 Fake News Stories Reporters Have Run Since Trump Won," but that was criticized by the Washington Post. The media doesn't cover terrorism even when it does. In a tweet that was posted, taken down, reposted and then taken down again, Trump wrote that the media, specifically the "failing" New York Times, NBC News, ABC, CBS and CNN (but notably not Breitbart), was the "enemy of the American people."

In a time of globalization, when the Internet makes the world smaller by allowing people to reach instantly across nations and continents, the citizens of Trumpland wish to put America first as Trump draws battle lines between Democrats and Republicans, Liberals and Conservatives, scientists and the superstitious, industrialists and conservationists, American and un-American. It's a Civil War of words and sometimes fists. Orwell wrote, "Nationalism is not to be confused with patriotism" and "By 'nationalism' I mean first of all the habit of assuming that human beings can be classified like insects and that whole blocks of millions or tens of millions of people can be confidently labelled 'good' or 'bad.' But secondly—and this is much more important—I mean the habit of identifying oneself with a single nation or other unit, placing it beyond good and evil and recognizing no other duty than that of advancing its interests."

Dividing US citizens may have helped Trump conquer the electoral college, but is it really the way to make America great and the world a great place to live? Trumpland USA requires a corruption of American English; it requires a constant enemy. Check Twitter hourly to find out just who has been added to Trumpland USA's list of enemies.

In his proposed preface for Animal Farm, George Orwell wrote, "If liberty means anything at all, it means the right to tell people what they do not want to hear." In these Trumpian times, the best weapons are dictionaries, numbers and science coupled with the notion of saving our world, the Earth, from humanity's darkness: hate.