James Marsh’s movie “The Theory of Everything” had me sitting in the dark weeping at the Princess of Wales Theater in Toronto. It’s a visually beautiful film about the life of British physicist, Stephen Hawking, based on the book, “Traveling To Infinity: My Life With Stephen,” by his former wife Jane Hawking. I was not weeping so much from what I saw on the screen but from the empathy of having lived parts of it in my own life, and being so viscerally reminded of it.

Stephen meets Jane when they are both young students at Cambridge, he interested in finding proof of a singularity that condenses spatial and temporal events into one unified theory of everything, and she in medieval Iberian poets. He is an atheist and she believes in God. They fall deeply in love. I am not giving away anything by telling you he develops "motor neurons disease," the official medical name of which is Amyotrophic lateral sclerosis (ALS), referred to in America as “Lou Gehrig’s disease.” The disease eventually leaves Hawking unable to walk, talk, or eat. But it doesn’t affect his intelligence. In fact, even today Hawking is often referred to as the smartest man in the world. But before his disease progresses to this state, he and Jane marry and have a family.

I will leave it to our critics at Rogerebert.com, Susan Wloszczyna and Brian Tallerico to give you a full review of the movie. What I want to convey is the deep emotion this movie engendered in me despite its glossy beauty.

Eddie Redmayne does an amazing job as Stephen Hawking, morphing from the athletic science student to the physically disabled but still brilliant scientist. Felicity Jones also deserves praise for her portrayal of Jane Hawking, burning brightly in her love for Stephen and her determination to pull him out of the doldrums and help him to pursue his scientific studies.

There was so much of this movie I could relate to: the first time Jane presents Stephen with a wheelchair; the decision she has to make in the hospital to have the doctor save his brain at all costs, as opposed to preserving his ability to speak; the sheer grit involved in staying positive and making sure their lives are as normal as possible. To see someone else going through that on the screen was of course a catharsis for me, but that wasn’t the only reason I related to the film. Cosmology was a favorite topic of conversation between me and Roger, and we were great admirers of Hawking. Quoting from his book “A Brief History of Time” when joking what the universe is comprised of, Roger loved saying “it's turtles, turtles, all the way down.” On more than one occasion in the airport Roger’s computer voice would be confused with Stephen Hawking. “Not a bad comparison,” Roger would joke. 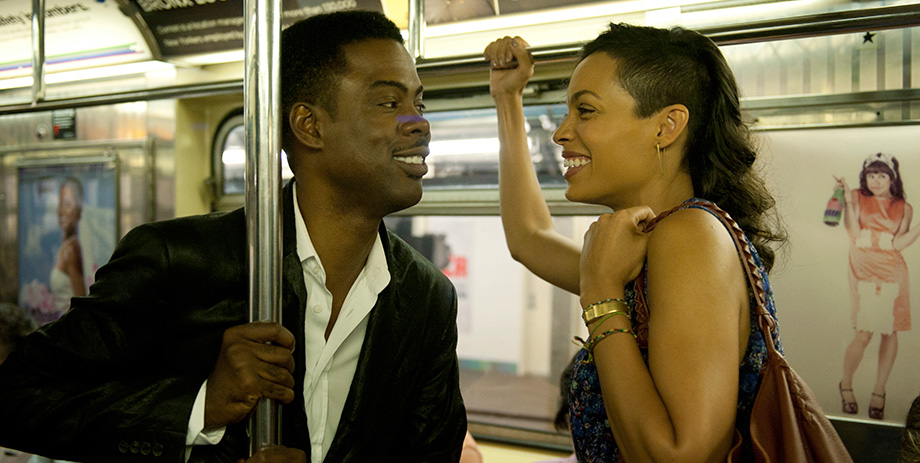 After such a heavy experience I needed to laugh. So I searched out Chris Rock’s new movie, “Top Five.” And laugh I did. It is not a great movie, but it is funny and entertaining, and I predict it will do well at the box office.   The movie is written and directed by Rock and contains some of his trademark raw humor. He stars as a comedian named Andre Allen who had big success in cheesy Hammy the Bear action movies, and now at 4 years sober wants to stop doing comedy and be taken seriously. His new movie is called, “Uprize,” about a Haitian revolutionary who kills loads of white people. Allen hopes the movie will become the new “Django,” but everyone wants to talk only about the next Hammy movie.

To complicate matters Allen is engaged to be married to a reality show star (Gabrielle Union) as on “Real Housewives of Atlanta.” Every step of their engagement and wedding is to be filmed for Bravo. She wants the wedding and he doesn’t. On the day of his bachelor party he is conducting a press tour for “Uprize” and reluctantly agrees to an interview with a journalist from the New York Times (Rosario Dawson). Prior to this interview, the Times has given his movies only abominable reviews and he doesn’t see how this interview will change anything. The relationship between Chris Rock and Rosario Dawson is charming, even though it crosses the lines of ethics and believability between an interviewee and journalist. Their talks are easy and interesting, and the chemistry between them is mature and warm. So you give them a pass on the story line and just go with the flow.

Cedric the Entertainer is hilarious as Rock’s publicist in Houston in a flashback scene where Rock discusses the situation that caused him to hit bottom and seek help for his alcohol and drug use. This is some real gutbucket raunch, and I have to admit that I laughed as hard as I heard Harvey Weinstein laughing in the row behind me.  There are other funny vignettes, including a bachelor party featuring Whoopi Goldberg, Jerry Seinfeld and Adam Sandler giving Chris Rock marital advice. And cameos by J.B. Smoove as his handler, and Tracy Morgan, Jay Pharoah and many other comedians. Also a too, too funny scene at the end with DMX in jail, singing.

Again, either Brian or Susan will write more about this film, but I just wanted you to know that if you need a laugh, and you don’t mind a little raunch,  this movie may be right up your alley.