Once There Was a Camelot: On the Crafting of a Legacy in “Jackie”

Wifely duty and public image-making are central to Pablo Larrain’s “Jackie.” The film focuses its attention on the newly-widowed and traumatized first lady, in the days between her husband’s assassination and his funeral arrangements. Jackie herself fills nearly every frame in quivering lip close-up, and her subjectivity equally dominates the film. The movie is satisfying partly because it offers an impressionistic response to the enigmas of those legendary images. We can’t help but to look at Jacqueline Bouvier Kennedy and wonder, "What must all of this have been like?"

What does it mean to be the wife of a "great man"? Even posing the question seems like an affront to modern sensibilities. Yet for centuries, it’s been the reality of existence for the spouses of men who were allowed to excel. In the world of American politics, success often hinges on giving the public the impression that a man has a happy, settled domestic life. The job of supporting that vision most often falls to the man’s wife. For a president’s wife, a sort of domestic exhibitionism—televised cookie bake-offs, beautifully hosted parties, collecting historical objects—comes with the position. In spite of the notable accomplishments of many first ladies, they have often been asked to kowtow to old-fashioned conventions.

The events of “Jackie” are framed by a testy interview between Jackie and a LIFE reporter in 1963 at her Port Hyannis home. Jackie smokes and surveys the man sent to her (Billy Crudup) with mistrust. Speaking in that mannered, upper-crust accent with admirable self-command, she sets the ground rules early. She will control the story that is told, and any messier truths must be excised from the public record.

Many of the film’s lines are partly based on recorded conversations with Mrs. Kennedy that were recently released by her daughter Caroline. One of the most famous of those is her fond anecdote of her husband’s love for Broadway musical “Camelot.” “Once there was a Camelot” is a comforting fairy tale, created by Jackie in a few brittle sentences. But it stuck. It was part rose-tinted memory in the face of grief, but mostly calculated to engender nostalgia, romance, and glamour. To ensure a legacy. Larrain captures the monied splendour of the Kennedy’s gilded lives. It’s clear he takes pleasure in recreating the elegant clothing and opulent surroundings.

While her brilliant husband takes on grandiose ambitions, the wife remains a cheerleader, a co-conspirator and sometimes an emotional punching bag. She must sideline her own opinions, or at least be sure to share them with caution. And she must present the best possible public face; hiding dark moods, ill-behaved children or philandering husbands from prying eyes. That is the skill set that Jackie mastered after two years or so in the White House, her initially tremulous TV voice notwithstanding. Larrain captures both the shaky fledgling effort (via flashbacks to a televised White House tour) and the fragmented but more professional image-making that surrounded the tragedy itself. 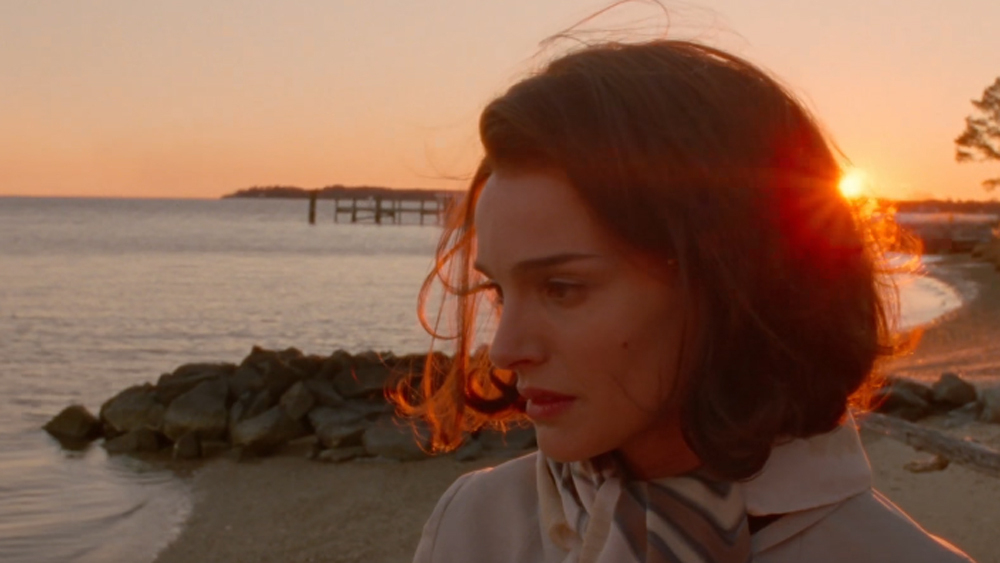 Pat Nixon once famously said that being the first lady was the “hardest unpaid job” in the world. While many might balk at that, it’s certainly a fraught and tricky position to occupy. “I wish I’d have been a shopgirl or a stenographer,” sighs Jackie to her priest (John Hurt). “I wish I’d have married an ordinary, lazy, ugly man.”

In a slightly perverse way, Jackie almost rises to the challenge of loyalty to her famous husband. It’s not exactly empowering, but the ferocity of the way she closes ranks is compelling. And though her situation was more tragic than most, she was not the only first lady to look the other way when it came to affairs. John F. Kennedy’s womanizing is perhaps among the most legendary examples of presidential philandering. Lesser known cases include the wartime romance of Dwight D. Eisenhower and the rumored pregnancy scandal surrounding Lyndon B. Johnson. Both men remained married until they or their spouse died.

“Women have endured far worse for far less,” Jackie tells us. The sentiment can’t help but to evoke the biggest crisis of this kind in memory: the Monica Lewinsky scandal. Hillary Clinton, as personally angry and heartbroken though she may have been, put an exceptionally brave face on the so-called "bimbo eruptions" of her husband Bill Clinton’s presidency.

In some ways, the two first ladies shared a certain philosophy. There’s more to be gained—personally, professionally—in guarding these wounds from the public. Clinton defended her husband on a few televised occasions before the whole ugly truth came out in 1998, but she demurred from commenting much on them until years later. The factors of embarrassment and personal privacy aside, there was a degree of calculation to Clinton’s silence. Her steadfastness could be read partly as a reflection of her own Washington ambitions—and to some extent, she also helped to keep her husband’s presidential legacy intact.

Jackie, too, was a rather private person. She never publicly discussed her husband’s affairs. She also chose the right time to share her grief. Instead of shrinking into the background, she rose to the occasion, placing herself in full view of the press. Her presence gave the national tragedy much of its iconic significance. Yet, rather than expose the unbearable pain of some of her real married life (stillborn children, countless affairs) she internalized it. 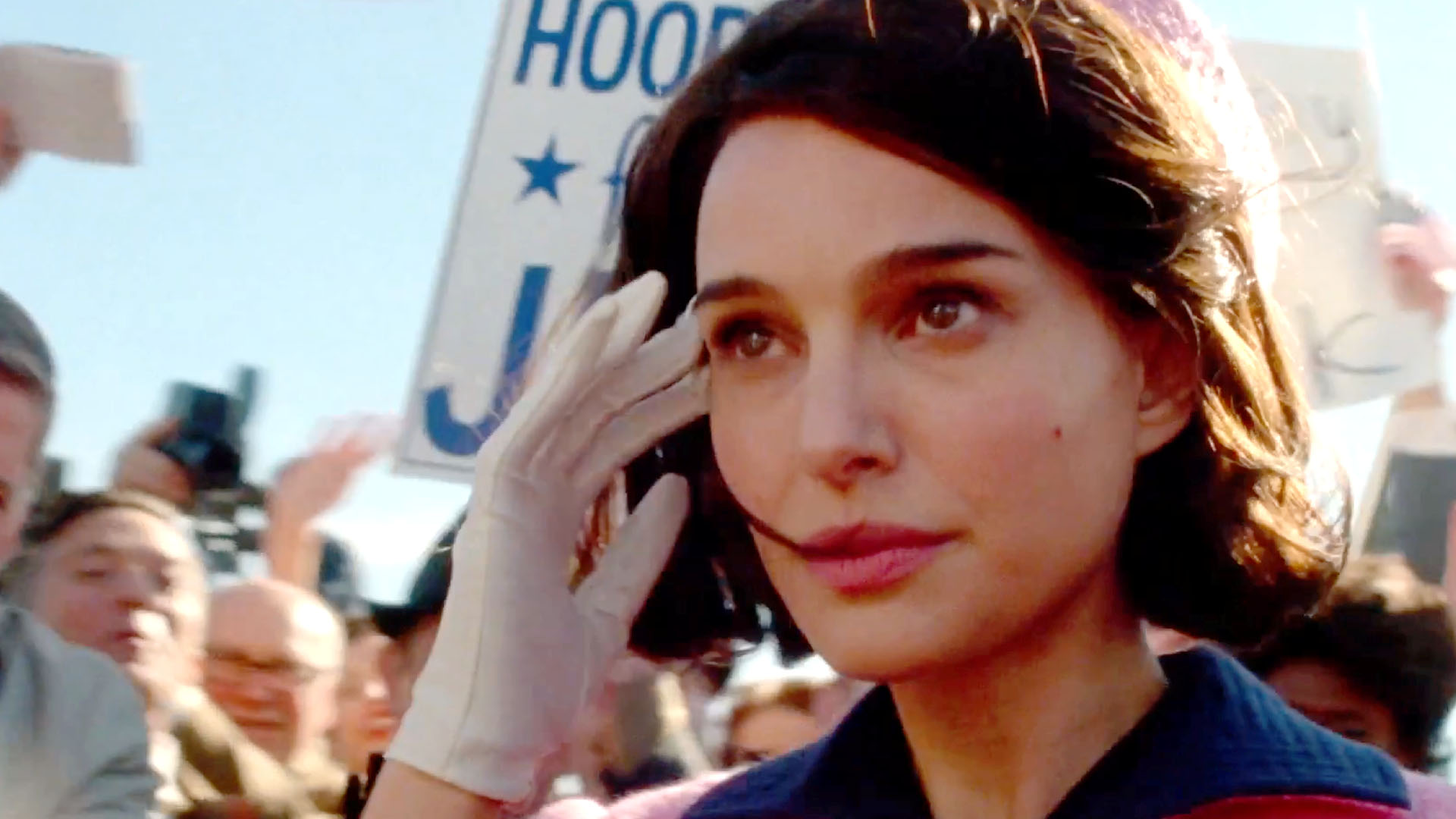 One of the most intriguing thoughts in the film is raised during one of Jackie’s conversations with the priest: Jackie acknowledges her husband’s affairs, but also reminisces about what a wonderful father he had been. “How could I hate him?” she trails off. It’s a rhetorical question, but a haunting one. No one had mentioned hating him. And yet as she verbally eulogizes him, excusing his weakness for other women, she can’t help but to reveal a deeper current of resentment.

The pomp and circumstance of JFK’s televised funeral procession—planned by Jackie—was more than most grieving wives should have been able to bear. But television had been the Kennedys' greatest asset and their most haunting companion. From the first televised presidential debate of 1960—in which the handsome young Kennedy clearly had a sweaty Richard Nixon beaten—to the horror of the Zapruder tape, a camera had captured every glittering and wrenching moment of their lives up to that point. It was only a logical conclusion to continue in the same vein, and the spectacle of a miles-long funeral procession glued millions of Americans to their television sets.

This is not presented as a craven decision for Jackie. In her bereavement, she is unable to extricate her public persona from her private life. She’s spent so long smiling coyly for the camera on the way into the White House that she must follow through and mourn her way out, in all her full-blown black-veiled dignity. It’s an unusual kind of catharsis, but this ambitious drive to protect and burnish her husband’s legacy seems to keep her mind from drowning in the horror of it all. “I tried to hold his head together,” she hysterically tells Bobby on the day of the assassination. That very real trauma is seemingly braced by this public exercise in camera-readiness and control.

At one point, Jackie is told that she’s not obligated to make such an effort. But she fails to understand. This, she says, is her job. To be a dutiful wife, yes, but also to smile for the camera—to ease the minds of the public, regardless of her own troubles. Hurled violently into an uncontrollable situation, she reasserts the waning power of a first lady on her way out the door. She plans an enormous funeral, she meticulously edits sound bites for interviews, she swans around her palatial residence in beautiful gowns. She knows how to play the part. But there’s no one left to play it for, save for the shell-shocked public.

The Kennedys—partly through appearance, partly through design, and cemented by helpless tragedy—made Americans feel something. First, it was admiration, hope, envy. Then it was shock and anguish. The rupture caused by this sudden, diabolical act practically ripped a hole in the American psyche. And so, happier memories helped in the healing process. “For a brief, shining moment, there was a Camelot,” the first lady says. People wanted to believe in Camelot, and Jackie—for her own set of reasons—helped them to believe.