"I can respect the stupidity of people who think that speed is beauty," agrees Paul Cox

Paul Cox passed away in Australia on June 18, 2016. I last saw him in April at Ebertfest, the film festival Roger and I started 18 years ago at the University of Illinois in Champaign-Urbana, Illinois. He said it was most likely the last time we would see each other. In private conversations and in comments Paul made while serving on panels, he emphasized that the important things in life are art and beauty and love. Nothing else mattered. That reminded me of this article my granddaughter Raven wrote about Paul at the Cannes Film Festival in 2009 when she was an 18 year old student. She was enthralled by his passion for these ideals, although a bit skeptical about their practicality in the real world.

Paul never wavered from those beliefs. He told me his idea of the world was formed when he was a little boy in Holland after the war, coming home to find his house shattered, his family in despair. He never knew what to expect from day to day. There was no stability, so his view of the world was pessimistic. Yet the philosophy he developed to counteract that view was one of beauty, of pulling together with others. His photographs and sculptures and films reflected this humanistic view. He was not afraid to speak out against those values he felt would take us back to greed, and oppression and war. He made it his life's work. That is why his movies spoke to Roger in a way that went beyond their cinematic value. (To read Roger's reviews of Paul's films, click here.)

When Paul had a liver transplant he met Rosie Raka, a fellow transplant patient from Indonesia, and they fell deeply in love. His last film, "Force of Destiny," was inspired by those events. I extend my deepest sympathy to Rosie, and to Paul's children: Kyra, Marius, and Ezra. — Chaz Ebert

This article was originally published on May 19, 2009.

The Australian film director Paul Cox, spoke to a group of students earlier this afternoon. While I've met Cox a few times before at the annual Ebertfest in Champaign-Urbana, IL, I'd never heard him speak freely to a crowd and was interested in what would be said. Paul enters in casual clothes and walks to the seat in front of the class, unfolds a few pages of yellow papers full of scribbly handwriting and begins speaking in a soft, slow, accented voice.

The title of the speech is "Invent not Imitate," encouraging our generation to break the rules and push the limits. So at first, of course, I'm into it. Slowly, the speech turns from an encouraging nudge towards originality and prioritizing values, to a pretty full blown revolutionary anarchist speech. 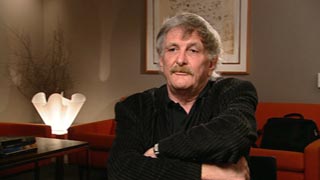 There is a pessimistic rant about the lack of genuineness and how many artists are "rubbish," specifically at this film festival. Cox rags on any one who even considers the nearby Monaco Grand Prix and car racing relevant or acceptable, and then stomps on organized religion, ex-president Bush, fashion and films like "Pulp Fiction." A student in the crowd asks Paul if there was anything he thought was worth doing, seeing or knowing about,  and beyond Cox's personal hero, Vincent Van Gogh and some rural Aboriginal tribes with which he'd spent time. It seemed he was not.

I was able to understand where he was coming from on most of his points about movies based on violence, and paradoxical car speed limits, but I wasn't quite sure how realistic his desires for the elimination of such things actually were. According to Coxian ideals, the only things worth doing are those in the motivation of beauty or relationships, everything else comes in at an unimportant lower number, even "ambition is rubbish." The students are pretty much in awe; no one is moving, talking, or even writing. At the end of his speech, Paul asks for questions just before re-stating how much he believes in everything he has just preached at us for the past hour. 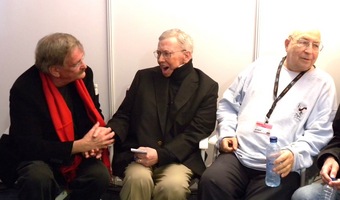 One tall girl near the back of the group gets brave and asks if Paul has respect for people who find beauty through mediums he disgusts, such as race car driving. This one stumps him for a minute. Paul acknowledges the intellectuality of the question, forthrightly answers "yes," then proceeds to say, "I can respect the stupidity of people who think that speed is beauty." We all know that a key part to the liberal and modern mind is in respecting the happiness of others even when it differs from our own. While it seems that Paul recognizes this, all he has said with his extensive wisdom on the world's corruptness assumes he is on the "right" side of this question.

A blond girl near the front is really into Paul's speech and asks for a copy to take home as inspiration. She tells Paul "I feel repressed at school, sitting inside at desks for several months" and how she feels most alive when in touch with beauty and nature. After that I realized how lucky I am to be hearing this speech. American college students are the perfect audience for this. We are impressionable, liberal, and looking for a cause. Any group of people over 30 wouldn't have thought more than a few hours about his revolutionary, "eff the man," type lyrics, and here I am, 18 and still thinking about it two days later.

While I was very impressed that Paul, probably in his 60's. has held for so long such a strong stance on life, I wondered if 20 years ago he would have approved of his own words. I admire Paul Cox's opinions and boldness to go out and preach them as he did. Even if I don't take everything away with me, and feel as if I'm going to change the world today, I can accept that I let a wise, experienced, yet cynical lover of art teach me the importance of thinking for myself in less than two hours.