Body Magic: The Healing Power of Ritual in "The OA"

The final scene of season one of “The OA” culminates in a ritual. While a school shooter holds a cafeteria hostage, the members of Prairie’s misfit crew come together to perform the five movements—a specific repetition of postures that, like most physical rituals, seemed both fully primal, as well as, to some viewers, a little melodramatic and silly. While other students cower under tables, Prairie’s disciples proudly stand, throwing their hands in the air, moving their fingers into shapes. Bodies bend, pulse, fold, unfold.

The five movements are theatrical, unsubtle. When performed perfectly, Prairie tells her captivated audience that they have the power to resurrect the dead, to shift dimensions, to transcend time.

The past several years have ushered forth a number of narratives about escaping captivity, from the beautifully shot and depressing "Room" to the chipper world of “Unbreakble Kimmy Schmidt.” Narratives about captivity are the ultimate tales of isolation and voicelessness. The women (because the vast majority of captivity narratives feature female protagonists) are rendered mute, sometimes by tangible physical means (the “women in refrigerators” comic book trope features women who are often maimed, bound and gagged, or even killed) and other times by subtler kinds of psychological terrorism. In “Jessica Jones,” Kilgrave commands women to smile politely and do exactly what he tells them to. In the now 20-year old world of “Buffy the Vampire Slayer,” the nerd squad bent on world domination is similarly interested in mind control.

The narrative of female silence is not limited to television. I grew up with girl power icons who were obsessed with speaking truth to power—from Tori Amos to Fiona Apple. In feminist circles, the girls we are supposed to admire are bravely outspoken, from bookish, brazen Jo in “Little Women” to bold and brilliant Belle in “Beauty and the Beast.”  We duked it out over whether Ariel in “The Little Mermaid” is a pushover since she traded her voice for a chance to be part of the two-legged world.

I grew up feeling sad, but never silenced. In fact, I was always deeply puzzled when teachers and mentors would urge me to see the connection between silence and oppression in my own life. I was often overwhelmed by the very opposite—the constant expectation that I was required to share my inner feelings with other people, as well as the expectation that the things I had to say would fit a very particular kind of narrative. In fact, women have always been speaking up and speaking out about our experiences—from scrawling poems on high school notebooks, to seeking the confidence of female friends, to standing at the front of a board meeting, to actively tweeting our experiences and ideas. The problem is not women speaking up, but whether women who share their story are actually being heard.

“The OA” reimagines what the story of voicelessness means by presenting a world where healing from trauma is not achieved through verbal narrative alone, but through the body itself. When Prairie comes home after being missing for seven years, the entire town is hungry for details of her story and conjures up horrible things that could have happened to her. Though Prairie’s parents want to protect her, they also yearn for details. Prairie’s silence seems obstinate, a refusal of familial love. And though Prairie weaves a story about her early years and time in captivity that enthralls her loyal followers, the series ends on an ambiguous note, questioning whether or not the narrative that Prairie tells herself and her friends is actually real at all.

As the OA, Prairie is a seductive leader, full of fortune cookie aphorisms, wielding a touch that has the power to wake up a burnt out, depressed teacher or calm a vicious dog. Prairie says she wants to assemble a group of five who are strong and flexible, but the one defining feature of Prairie’s disciples is also an ability to withstand emotional and physical pain. The frenzied movements require participants to reject the inner experience in order to effectively perform—for the body to become the site not for individual expression, but communal experience. 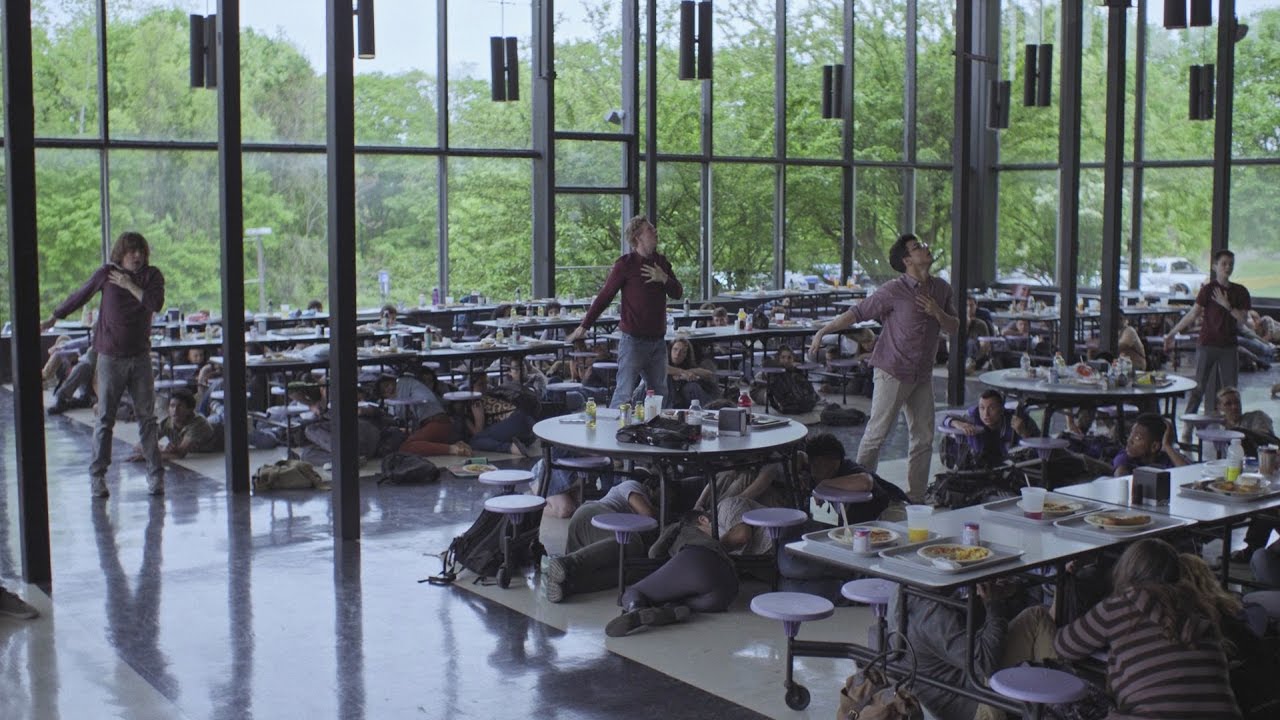 Each person in “The OA” is a prisoner of a narrative they can’t seem to shake—from the high school students attempting to navigate outside pressures and internal desires, to the teacher who is struggling to mourn her brother’s death. Even Prairie’s parents are stuck in stories of their own construction. After all, Prairie’s adoptive mother hides the evidence her daughter went to find her birth father in order to spare her adoptive father’s feelings, and preserve their narrative that Prairie is content with being cared for at home.

Centralizing the body as vehicle for communal healing is a unique method for telling a story of victimization, especially in a culture where women’s bodies are consistently objectified. The dream-like movements in “The OA” were directed by Ryan Heffington, the choreographer well-known for his collaborations with Sia, which also, not coincidentally, explore the body’s expression of various kinds of traumas—from personal pain to societal forms of oppression. Critics of Sia’s videos with the exceptionally talented, 14-year-old dancer Maddie Ziegler claimed that her girl-body was sexualized, even though there is nothing sensual or seductive in the way that Ziegler approaches movement. Instead, Sia’s videos emphasize how dance is a vehicle for communicating a range of emotions, just as in “The OA” dance makes the internal external, or, as Prairie puts it in an early conversation with high school bully Steve, dance makes the “invisible self” visible.

Though some contemporary shows that contend with trauma attempt to push past the sensationalized, simplistic narratives of abuse found in programs like “Law and Order: SVU,” the vast majority of depictions of female suffering still fixate on the body as a place of imprisonment, rather than joy or spiritual epiphany. In “Jessica Jones,” bodies are empty husks, the holding case for a mind that can be easily controlled by somebody else. When the body is not being abused, it is often transformed into a weapon, as superhero shows featuring female protagonists often flip the script by enabling women to punch out and protect, rather than seek out a male guardian. Sex and violence often merge in predictable ways—in “Daredevil,” for example, sex is not a conquest, but the outcome of a sparring match between Matt and Electra.

But rather than locate power in the traditionally masculine art of fighting, “The OA” stresses the power of the traditionally feminine art of magic. The movements cast an internal and external spell, transforming the individual into a vessel for healing, rather than destruction. The repetition of story then is less about the veracity of events, than about their profound emotional meaning and the surprising ways ritual can tap into human experiences beyond the self. In a media landscape that still urges survivors of trauma to hurry up and heal, these depictions of the recovery process feel compassionate and necessary, an urgent reminder that there are some experiences which are fundamentally impossible to capture with words.