Turkey Day TV Ain’t What It Used To Be

Thanksgiving Day has its attractions, to be sure—for myself, the mashed potatoes concocted by any member of my mother’s family, as well as the variety of non-pumpkin-based desserts made by a favorite aunt (including impossibly sumptuous brownies and a lemon meringue pie with a meringue so high as to remind one of that guy from Kid ‘N Play), were and remain strong draws to the holiday and its animating spirit of gratitude. However, the day has never been a particularly great one on which to not be a sports fan. Specifically a football fan. Now, these days I’m perfectly capable of sitting and half-enjoying a football game if necessary—I learned quite a bit by playing those Madden video games, so I kind of “get it” now—but in my sensitive youth I wasn’t having it, and so, whenever I was lucky enough to spend Thanksgiving at the home of a relative who had a second television set, I’d spend the non-eating portions of the day in a different tri-state area ritual: Watching a bunch of “King Kong”-related movies, including, of course, the deathless “Kong” its own self (OF COURSE I mean the 1933 Cooper-Schoedsack film) on WWOR Channel 9, the New York station that provided Martin Scorsese and so many other cinephiles and cineastes with an early film education.

But nothing lasts forever, and WWOR Channel 9 is now “My 9,” home of bottomless “Big Bang Theory” reruns and no movies to speak of. It’s been that way for a while. So as a younger adult, eventually I became happy to find a less cinephilically pure but highly entertaining replacement ritual in Mystery Science Theater 3000’s “Turkey Day,” a quasi-marathon of MST3K episodes shown over the course of a Thanksgiving on Comedy Central and then The SciFi Channel. 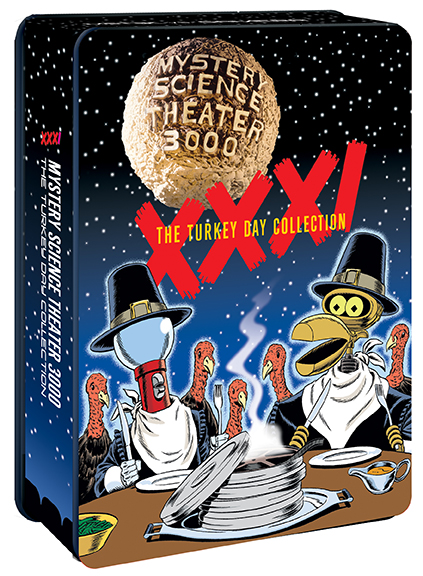 I understand that a lot of film lovers, particularly those with a particular jones for genre movies, find the very idea of MST3K, in which a cast of unusual characters provides an oft-mocking running commentary to real movies that its dinky-catchy theme song terms “cheesy,” offensive practically to the point of sacrilege. I recall reading a particularly scathing dismissal of the program by the estimable critic and author Kim Newman. But I remember inadvertently coming upon an episode sometime in 1990, checking out the cable hookup at the apartment I had just moved into, and being immediately flabbergasted, and then laughing, a lot, and wondering what I’d just seen. Once I learned, I was hooked. The arguable desecration of some of the movies (many of which had been victimized before they even made it to the show, as in several of the Russian fairy-tale movies redubbed and edited for American audiences) didn’t bother me—I like to think I’m a good semi-postmodernist, open to all stripes of creative repurposing. I did feel a little better when I got to spend one Turkey Day in the company of several other critic-types, including one certified Val Lewton scholar, and we all had a grand old drunken time.

That tradition, too, is ended—MST3K ended in 1999, and the various creators behind it have dispersed to such similar entertainment ventures as “Rifftrax” (you provide the movie, they provide a standalone commentary you watch along), “Cinematic Titanic,” and sundry live MST3K events. And of course the Turkey Day experience can be simulated via physical media: between Rhino and now Shout! Factory, there are over 30 volumes of MST 3K episodes in print. But I have to say that it warms the cockles of this particular fan’s heart that the just-released Volume XXXI is dubbed “The Turkey Day Collection.” For no actually really good reason except to provide Shout! Factory’s designers to come up with nifty robots-dressed-as-Pilgrims artwork for the commemorative tin…and, okay, have show co-creator Joel Hodgson provide brand-new intros for the movies, of which I’d have to say “The Painted Hills” is a big favorite. This 1951 concoction is a novelty, in that it stars the famed collie Lassie, only here Lassie isn’t playing him/herself, but rather Shep, the dog pal of a grizzled old prospector who’s betrayed by a protégé. The action occasions a lot of terrific animal-voiceover humor from bots Tom Servo and Crow T. Robot, mitigated as usual by the soothing sarcasm of Joel. As has been the custom recently, the box divides itself between the two hosts, Hodgson and Mike Nelson. One of the Nelson episodes is the definitively disquieting 1976 killer-worms exposition “Squirm,” the kind of thing that hardcore genre fans get kind of shirty about (its writer/director Jeff Lieberman subsequently made the cult acid picture “Blue Sunshine”). I’m so earthworm-phobic I can barely bring myself to watch it regardless of whether the soundtrack’s the original, or the MST 3K wisecrackers. It’s still a potent form of DVD comfort food to have that, “Jungle Goddess,” and “The Screaming Skull” added to the pile of hilarity this Thanksgiving. Hope yours is a bountiful one.