The Return of “Dice” Continues on Showtime

With an exaggerated sense of humor that recalls “Seinfeld” more than “Louie,” Andrew “Dice” Clay finally gets his own TV show in Showtime’s “Dice,” premiering this Sunday, April 10th on Showtime for a six-episode run. Dice has always been a larger-than-life personality, but it’s been interesting to watch his public persona shift a bit in the last few years with memorable roles in “Blue Jasmine” and HBO’s “Vinyl.” If you’re wondering if “Dice” continues the kind of image alteration that working with Woody Allen and Martin Scorsese may have had, the answer is “yes and no.” This is not a “brand-new Dice.” If anything, it’s the same Dice, but with a modern twist. The show is really about the dividing line between “Andrew” and his stage character, “Dice.” However, and even he’d admit this, the line blurs a bit when he’s off-stage. At its best, “Dice” honestly captures how one of the biggest stand-up comedians in the world struggles to make ends meet with his girlfriend (Natasha Leggero) and in a world of comedy in which his brand of humor is often met differently than it was at his peak. The show too often dips into set-ups—ridiculous coincidences and weird guest stars—but enough insight breaks through to justify a look and the hope that the show settles down and really tears down the curtain between Andrew and Dice. 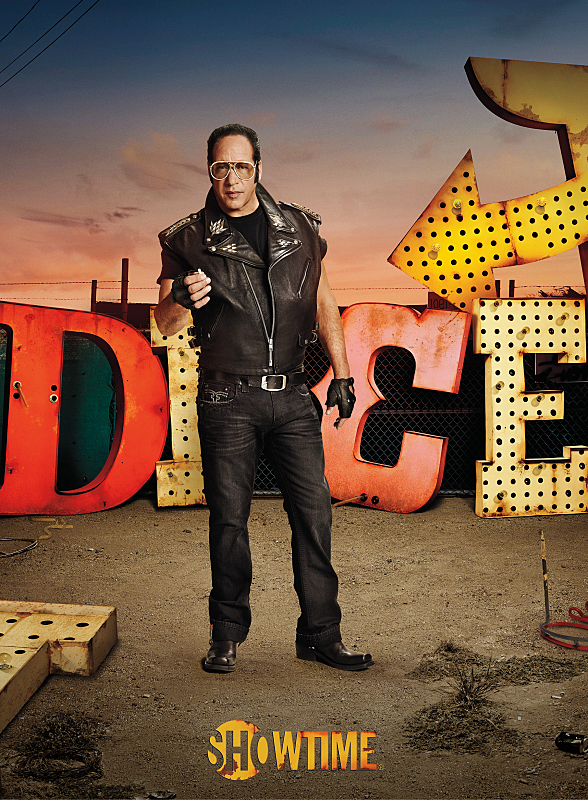 The best episode of the four I watched is the second, in which Adrien Brody, playing himself, asks Clay to help him with a masculine role he’s playing. Brody is a method actor and he’s worried he’s not “man enough,” so Clay breaks down what it means to be Dice. Fingerless gloves, macho posturing, a lot of referring to yourself in the third person (he gives him a tour of the house by saying things like, “This is where Dice does the f**king.”) Throughout the show, Dice lets his ego fly—“When I was a kid, I used to get up three to four hours earlier just to spend more time with myself”—but it’s often in a way that’s designed to puncture it at the same time. Dice is ridiculous. Dice knows he’s ridiculous. But he’s Dice. Deal with it.

When the show is focused on “Andrew vs. Dice,” it can be pretty fascinating, but it’s often weighed down by ridiculous plotting and guest stars. A bit in episode three in which Dice crosses Criss Angel is just silly, as is an extended bit in which Clay is looking for a plaster cast of his penis done from back when he was in his prime (although that too serves as a commentary on how Dice isn’t the same man he used to be, literally). Even the supporting cast often feels wasted, especially the great Kevin Corrigan, although I did love a bit in which Wayne Newton yelled at Dice for convincing him to do “The Adventures of Ford Fairlane” instead of “Pretty Woman.”

At its very core, “Dice” is about common conflicts within men, not just “Andrew” vs. “Dice.” Dice has always been the macho male id run rampant, and it’s intriguing to see him take a closer look at that. In the opening episode, he attends a gay marriage, not something the Dice who sold out Madison Square Garden may have ever pictured himself doing, but he’s more annoyed by the $5 ATM fees in the casino than in the same-sex union. Strengthen or ditch most of the supporting cast (and go “Louie”-style with a rotating ensemble) and “Dice” could become something really special. As is, it’s still an interesting chapter in a return of a once-superstar that most of us never saw coming.