"Every time a friend succeeds, I die a little." -- Gore Vidal

I was the only patron at my screening of "U2: Rattle and Hum" back in 1988. Sitting in the cavernous darkness of my old 'hood theater, with its still-unmatched speakers and the ghosts of my childhood movies, I fell in love with the band U2. Beforehand, I had a casual familiarity with their music, and while I liked some of the songs, I wouldn't have considered myself a fan. I went because the black and white cinematography looked gorgeous in the clips I'd seen on TV. I wasn't disappointed. Phil Joanou's documentary is achingly beautiful. That, along with Bono and the New Voices of Freedom gospel choir's performance of "I Still Haven't Found What I'm Looking For," cemented my diehard fandom. Once, in a Dublin pub, armed with numerous imbibed pints of Guinness and a dare from the guitar-playing busker who'd been entertaining the crowd, I sang "All I Want Is You" to a crowd of swooning lasses standing in front of me. That evening ended well.

Neil McCormick, the protagonist of "Killing Bono" would hate that I started this piece fawning over the murder victim of the film's title. After all, he feels trapped in Bono's shadow and decides he has to kill him. "Killing Bono" opens in 1987, with a stalkerish Neil (Ben Barnes) driving his car to Bono's latest Dublin appearance. Rambling to the camera that he was originally entitled to everything Bono has, Neil crashes his car before exiting with his gun drawn and pointed at his prey. "I always knew I'd be famous," he tells us.

Cue the flashback machine! Suddenly, it's 1976, and McCormick stands in a high school hallway reading a billboard notice. His classmate, Paul Hewson (Martin McCann), is holding auditions for his new band, The Hype. Despite being in Neil's band, The Undertakers, Neil's brother Ivan (Robert Sheehan) tries out for second guitar. Much to Neil's chagrin, Hewson loves Ivan's work and wants him for his band. Neil objects--Ivan's really good and essential to Neil's success--so he tells Paul no deal. 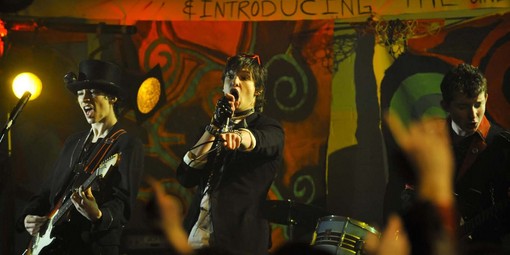 McCormick thinks The Undertakers will overshadow Hewson's Hype. His first taste of just how wrong he is occurs at a joint venue hosted by both bands. Hewson's banner promotes his band in huge letters, while "The Undertakers" is written as an afterthought on the bottom. Though both bands do well, The Hype does better, closing the show with their own songs and the energetic, charismatic performance of their lead singer. This fuels Neil's hunger to beat his friend and rival. That his friend eventually succeeds in ways he does not makes Neil die more than just a little.

On the bus ride home, Paul tells Neil he's changing his name to Bono and his band's name to U2. Neil thinks both proper nouns are silly enough to guarantee failure. How wrong he is. Paul heads out on the road while Neil gets a job writing for a magazine to supplement his dreams of rock star success. Neil's decision to keep Ivan for himself, made without his brother's knowledge or consent, will have dire consequences for him later when U2 gets big enough to sell out stadiums full of adoring fans.

When U2's first release, "Three," hits Irish record stores, Neil's co-worker at "Hot Press Magazine" writes a cover story on the hometown heroes. Neil tells his editor that he and Ivan are going to be even bigger. With much convincing, Neil sells Ivan on moving to London to speed up progress. Performing at an illegal strip bar outside Dublin, Neil secures financing for the move from its gangster owner, Danny Machin (Stanley Townsend). Machin is concerned about his public image, which takes a constant beating in the daily rags that report his criminal activities, but he's even more concerned about his money. Neil promises Machin a return on his 10,000 pounds. Machin promises to kill him if he doesn't deliver.

In London, Neil and Ivan visit a record label where an executive named Hammond (Peter Serafinowicz) digs Neil's song despite having misgivings about its lyrical subject matter: sexual assault. "Yes, but it's also about existential angst," explains Neil. "It'll be a hard sell on Top of the Pops," Hammond tells them, but he verbally agrees to sign them anyway. "Try to write a song that doesn't have kids reaching for their dictionaries," he warns. He also steers Neil away from any more existential angst ditties: "Pop songs are about wanting to have sex with hot ladies, having sex with hot ladies, or reminiscing about having sex with hot ladies."

Armed with success, Neil and Ivan assemble a band and rent a large warehouse-style apartment from landlord Karl (the late "In The Name Of The Father" actor Pete Postlethwaite). Karl is one of those old queens who holds court with ribald gay parties. He ogles Ivan ("he wants to stick his thing in me," Ivan assesses), whom he thinks is Neil's gay lover, and offers the boys advice that is both useful and deranged. Postlethwaite is quite charming in his last role, even if it is stereotypical. "Someone's been raiding Spandau Ballet's closet," he says, addressing Neil and Ivan's attire. His lodging rules include "no drugs, unless shared with the landlord. No deviant sexual practices, unless ditto the above." Karl also introduces the guys to their neighbor Gloria (Krysten Ritter from "Breaking Bad"), who becomes the band's manager and Neil's lover.

As "Killing Bono" follows Neil's path, the specter of Paul's success haunts the background, causing Neil to do some incredibly stupid and infuriating things. To their credit, writers Dick Clement and Ian La Frenais present them as such, with Ben Barnes up to the task of making you want to punch Neil in the face while rooting for his redemption and success. This was not easy for me, as I have always been confused and aggravated by the artistic notion of "selling out." "Killing Bono" almost lost me when, late in the film, Paul calls Neil to invite his band to open for U2. Neil says no, because he wants to make it on his own. I wanted to kick in the screen when he said he'd rather play for 500 of his own fans than 80,000 of U2's. Why?!! Wouldn't the exposure generate an entirely new fan base, especially since both bands are in the same genre? Didn't Cassavettes act to finance his visions? Didn't Sayles write genre pieces and doctor other scripts to finance his? Would that collaboration with others, no matter how bad the outcome, constitute not making it on one's own? Is that "selling out?"

To hell with all that--doesn't Neil owe that pissed off gangster from a few paragraphs ago thousands of pounds? This appearance would solve a lot of problems. Ivan's fury at learning what Neil has done matched mine, yet "Killing Bono" offers Neil an attempt at correcting his mistakes, which I rooted for even after it returns to its first scene. I'll leave you to discover what happens, and why, but I'll reveal two things. First, the scene is in some ways a cheat the second time around, both in its construction and execution. Second, "Killing Bono" waits until the film's end to divulge that Neil McCormick, like Bono, is a real person. McCormick's book, "Killing Bono: I Was Bono's Doppelganger," is the basis for this film.

"Killing Bono" is an entertaining 2 hours of music, history, comedy and cliché. Barnes and McCann sing their own songs and turning in fine acting work. McCann in particular stands out for the tricky role he has to play, bringing a larger than life character like Bono down to Earth. His last scene with Sheehan's Ivan is the film's most touching moment. Townsend's gangster is equally amusing and intimidating, and I suppose McCormick has both these characters (and the Dublin Bus) to thank for his eventual career. If nothing else, this movie earned his book one more sale. 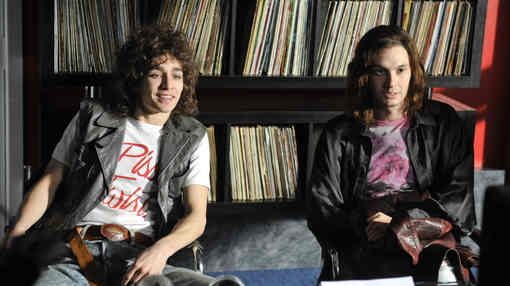