Showtime’s “Billions” works if you approach it from an angle that you may not expect. With stars as bright as Paul Giamatti and Damian Lewis, viewers are probably expecting the next clever adult drama about the high-powered world of finance and an atmosphere in which alpha males are the only ones that survive. That’s only partially true. Whenever “Billions” gets dense with discussion of financial regulations and insider trading, it feels a little desperately eager to show you how smart it is. When it allows itself to be a tawdry soap opera about people who alternate sleeping around with stabbing their allies in the back, it’s more effective. I really only learned to embrace Netflix’s “House of Cards” in the seasons following its first when I realized it was no longer a political commentary—it was “Dallas” set in Washington, DC. “Billions” has a similar dynamic. Don’t take it too seriously and you’re more likely to enjoy the bumpy ride.

The premiere of “Billions,” directed by Neil Burger (“The Illusionist”) and written by Brian Koppelman, David Levien and Andrew Ross Sorkin, opens with a shot of U.S. Attorney Chuck Rhoades (Paul Giamatti) tied up by a dominatrix. She burns him in the middle of the chest with a cigarette, and then pisses on him to alleviate the burn. (Ah, Showtime. A network that too often screams “Look what we can do that the other networks can’t!” in an era when shock value doesn’t have the dramatic cache it did pre-Netflix and pre-FX.) But it turns out that Rhoades is a pretty likable family guy, and someone who, at least through the first few episodes, seems like he’s honestly interested in the societal good. Sure, he sometimes gets a little overzealous in his prosecutions, and his obsession with justice extends all the way to making a man pick up dog poop with his bare hands, but Rhoades seems like a decent man. 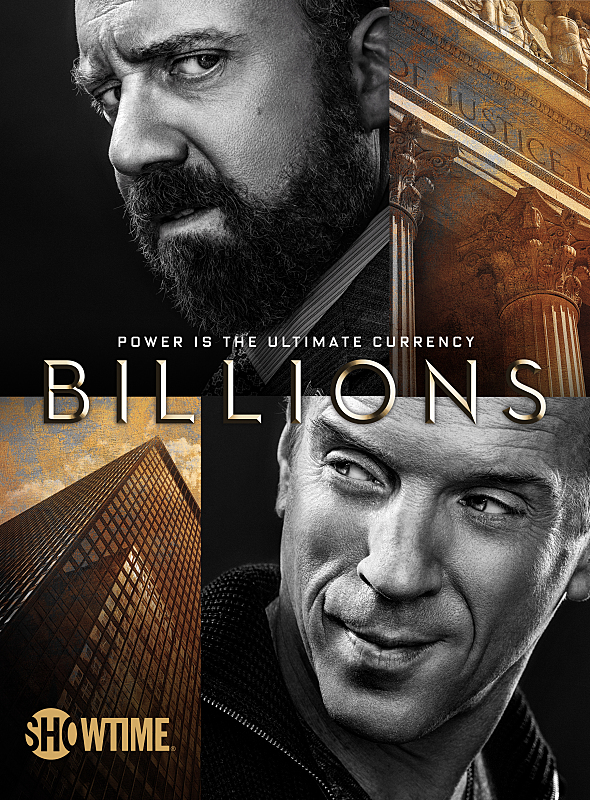 Bobby “Axe” Axelrod (Damian Lewis) seems less-so. His malevolence is shrouded in a handsome smile and larger-than-life personality, but Lewis allows just enough of it to sneak through that we realize this is a man that should not be trusted. Axelrod was the only survivor of his hedge fund company, now called Axe Capital, on 9/11, and so he pays for the college tuition of the children of his former partners. Even this scene is laced with enough smarm that one wonders about Axelrod’s ulterior motives. By season four, we could learn that he helped plan the attacks just to eliminate his partners. He’s cut from the same cloth as Frank Underwood on “House of Cards”—blindingly charismatic and smart, but also possibly pure evil.

Both of the wives of Axe and Rhoades (which sounds like a ‘70s soul duo) play major roles in “Billions” as well. In fact, Wendy Rhoades (Maggie Siff of “Sons of Anarchy”) has linked the men in ways that neither particularly likes—she happens to work for Axe. Yes, the wife of the U.S. Attorney works with the hedge fund king of New York City. I’m not sure of her exact job title, but she’s almost the motivation speaker or therapist of Axe Capital. Insecure men come into her office and she pep talks them into making another million. She’s the most fascinating character on the show, not just for those scenes of alpha male inspiration, but because she’s the one who looks both Axe and Rhoades in the eyes and calls them on their bullshit. Axe’s wife Lara (Malin Akerman) is more underdeveloped at first, but I don’t imagine that will last long, and we get hints that she has the same cutthroat intensity as her husband.

As the cast settles into their roles, “Billions” becomes more of an acting piece than a writing one. Lewis captures the kind of egocentric leader who is either adored or loathed, allowing Giamatti, an actor who can be prone to chewing scenery, to actually give the more grounded performance of the two. The first episodes, arguably, belong to Siff, who clearly wasn’t well-utilized on “Sons of Anarchy” because she’s way more vibrant here, telling insecure hedge fund managers that they’re like Navy Seals. She’s going to be fun to watch.

“Billions” is full of people who say things to each other like “You got to be playing three-dimensional chess” and “Well, if WE hired you, you must be a genius.” In other words, they talk like TV characters. Everything is heightened in an unnatural, soap operatic way. Over time, the mega-talented cast finds a way to ground the characters just enough that we stick with it, and there’s that moment you’ll be waiting all episode for at the end of the premiere when Lewis and Giamatti look each other in the eyes that’s pure gold. Ultimately, “Billions” started to remind me of “Damages,” another show with ridiculous plotting carried by its incredible actors (and the always-great David Costabile appears in both). I didn’t believe half of what happened on “Damages” would happen in the real world but I still loved the tawdry insanity of it all. So, “Billions” isn’t the next “Mad Men.” I’ll be almost as happy if it’s the next “Damages.”