Sex Symbol Without Auteur: The Strange Case of the Gina Lollobrigida Filmography

Anita Ekberg has “La Dolce Vita” by Federico Fellini, “War And Peace” by King Vidor, and “Hollywood or Bust,” by Frank Tashlin…

Marilyn Monroe has “River Of No Return” by Otto Preminger, “Some Like It Hot” by Billy Wilder, “The Misfits” by John Huston…

Sophia Loren has “Heller In Pink Tights” by  George Cukor, “The Rise And Fall Of The Roman Empire” by Anthony Mann, “A Countess From Hong Kong” by Charlie Chaplin, “Two Women” by Vittorio De Sica…

Jayne Mansfield has “Will Success Spoil Rock Hunter” and “The Girl Can’t Help It” by Frank Tashlin, “The Sheriff Of Fractured Jaw” by Raoul Walsh…

And Gina Lollobrigida has “Solomon and Sheba” which is, yes, directed by King Vidor but doesn’t quite rate as one of the auteur’s “signature” films. The postwar sex goddesses of 20th Century cinema cited above got to work with a sufficient number of notable directors that they all have a place not just in the Pantheon Of Sex Goddesses but also the pantheon of Great Films period. This doesn’t seem to be so of Gina Lollobrigida. At the first cursory glance her filmography seems the least colorful and interesting of her peers. This is a little odd for a number of reasons. One prominent one is that Lollobrigida the person is an unusually smart cookie, as the fellas used to call women of above-average…oh good grief, stop me someone. What I mean is Lollobrigida was conspicuously savvier than a lot of the sex symbols who got put through the international studio grinder. When she became frustrated with her film career in the 1970s, Lollobrigida, then in her 40s, began a successful photojournalism career, scoring an exclusive session with Fidel Castro, for one thing. 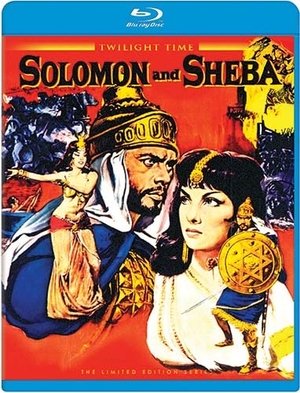 Seeking some answer in The Work, I took stock of three Lollobrigida films recently released on Blu-ray, including the aforementioned “Solomon and Sheba,” (Twilight Time) a 1959 Biblical not-quite epic. The production was eminently star-crossed, as Tyrone Power had been playing one half of the title roles and was three-fourths finished with his work when he died of a heart attack. His role was filled by Yul Brynner, foregoing his trademark bald-pated look. Lollobrigida played Sheba, as in “Queen of.”  The movie’s story treats a pivotal moment in the civilized world’s clash between monotheism and paganism, which also provides a nifty pretext for ancient-world hoochie dancing and orgy scenes, such as they were in 1959. Vidor directs the battle scenes with more attentive care than the hoochie dancing and orgy scenes, which really makes one appreciate Cecil B. DeMille. Despite being obliged to appear in all manner of bejeweled semi-dress and perform the most prominent Dance of Temptation, Lollobrigida’s performance is both refined (the Subiaco-born actress is working very hard to squelch her Italian accent) and restrained, which is to say that in the hoochie-dancing department she’s no Debra Paget. Her seemingly innate sense of inhibition isn’t the only thing that keeps the movie from whirly-birding into vulgar sword-and-sandal delirium, but it sure helps. 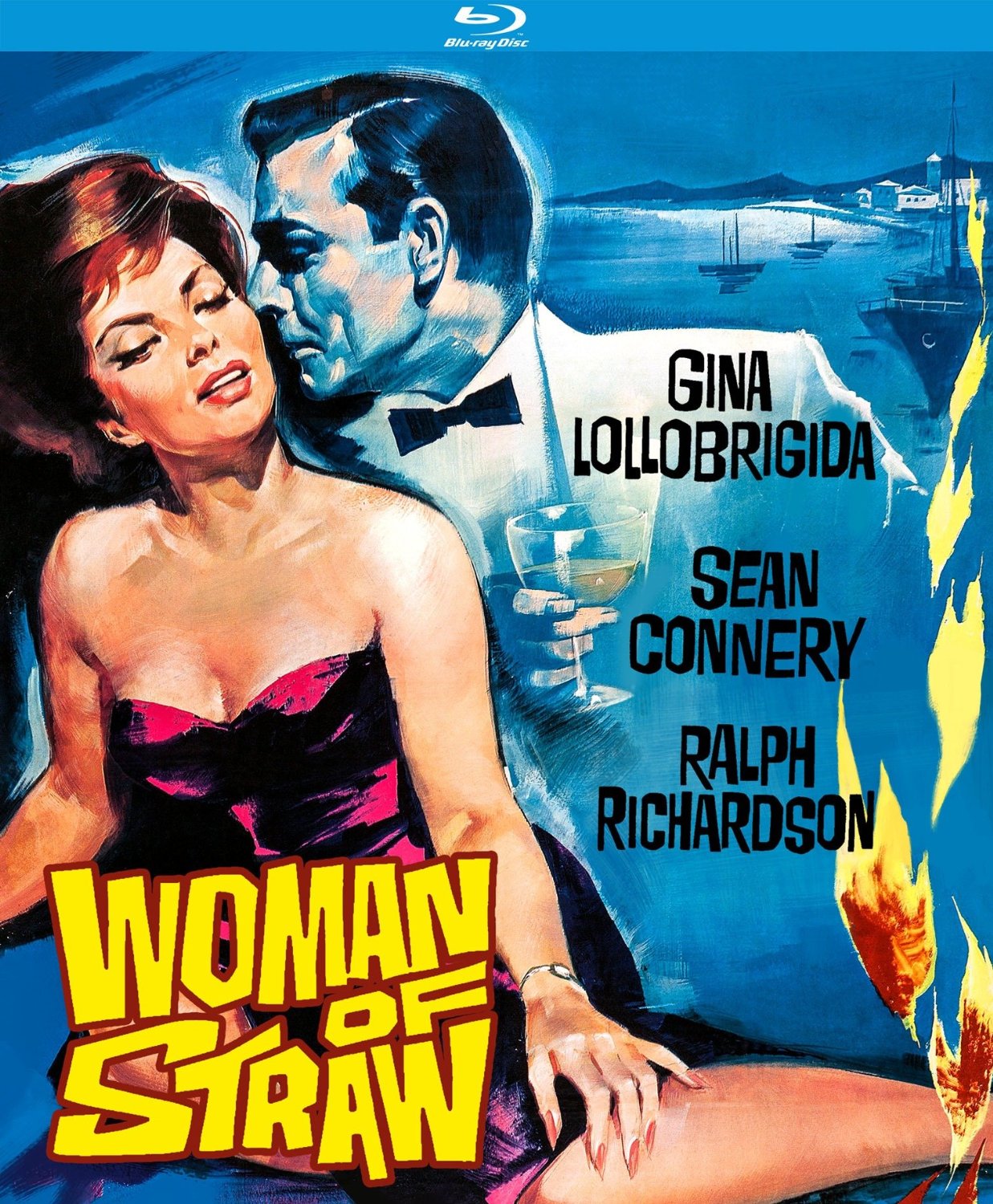 Kino Lorber Studio Classics recently put out two Lollobrigida ‘60s films, the first the determinedly odd 1964 British production “Woman of Straw.” Once again we find Sean Connery playing a confident man of action who treats women shabbily…yes this is one of the 1960s non-Bond movies in which the actor tried to change things up a bit. To reveal just how would be a spoiler. Suffice it to say the movie, rather overdirected by Basil Dearden, presents a near-Hitchcokean triangle of romantic deceit and possible murder. Lollobrigida plays an initially no-nonsense nurse hired by Connery, the nephew of a thoroughly hateful rich twit played by Ralph Richardson. Richardson’s character routinely humiliates his servants, many of whom are of African origin, with sadistic relish, and the actor plays this horror show with such vigor that his awfulness is actually never even entertaining. Again, Lollobrigida aims for a straight-backed restraint, something in the Alida Valli line, but the movie’s laboriousness doesn’t create an effective platform for her work. 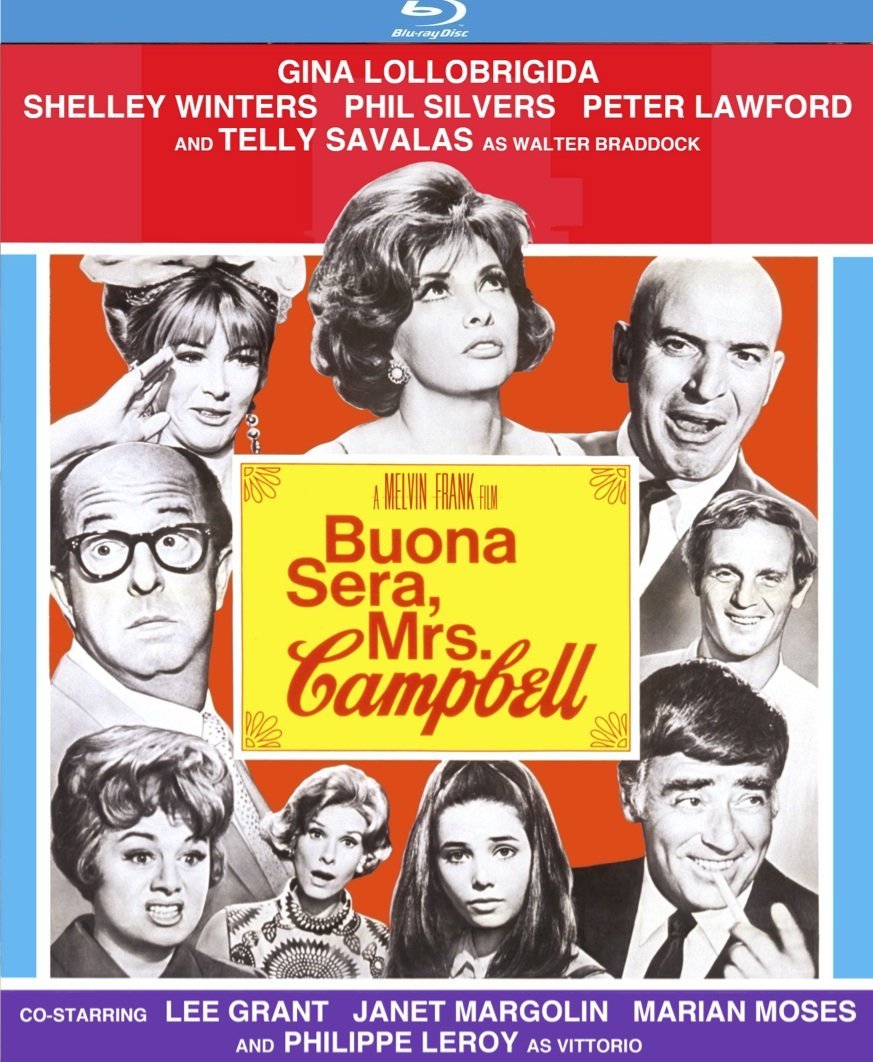 She’s spectacularly broad in 1968’s “Buona Sera, Mrs. Campbell,” as an Italian single mother with a secret that would later provide uncredited plot inspiration for the jukebox musical “Mamma Mia.” Written and directed by former Hope/Crosby “Road’ movie gag man Melvin Frank, the movie finds Lollobrigida navigating between three U.S. army vets who think they’re the father of her teen daughter, played by a very un-Italian Janet Margolin. The fellas are Telly Savalas, Phil Silvers, and Peter Lawford, and in the movie’s first half the first two mug so much you’re almost relieved for Lawford’s mentholated indifference to performing. Their ugly American wives are Lee Grant, Shelley Winders and former tennis pro Marian Moses, all turning “shrew” up to 11. The film’s main point of interest is how Frank and his cast look at World War II vets in an era untouched by “greatest generation” piety. In a very un-“Private Ryan” touch, these guys are perfectly willing to accept a fiction Lollobrigida’s character has concocted to maintain her honor in her small hamlet. As the movie settles into an opening-and-slamming doors farce, Silvers manages to work up some comic traction, as does Lollobrigida, whose character’s determination to maintain face while not giving up any more of her dignity forces her into some schizoid actions. The movie is still mainly appreciable as a curio, however.

Where does this leave Lollobrigida, who did, in fact, appear in films by De Sica and Tashlin—albeit two of their least distinguished efforts? Her saucy sex-symbol persona is still best appreciated, I suppose in the 1952 swashbuckling item “Fan-Fan La Tulippe,” a fun and very good if not great film. And I’m still waiting to see 1972’s “King, Queen, Knave,” directed by Jerzy Skolimowksi (!) and adapted from a Nabokov novel…