Television romantic comedies are reliant on two things: chemistry/likability of the leads and the writers’ observational ability to make the specific feel universal. We watch them because we want to see two lovely people find romance and we want to see something relatable and identifiable in their search for connection. There have to be more sparks flying than a random couple at a Starbucks on a Tuesday and there has to be some sort of insight into the way couples form and come apart in the real world. At its best—the first two seasons of “Girls”—it transcends meet-cutes and slapstick. At its worst—any number of failed network comedy shows, but I’ll go with “A to Z” for a recent example—it reeks of bad set-ups and weak storytelling. Netflix has dipped their toe in this pool before with Aziz Ansari’s “Master of None,” but that’s not really a romantic comedy as much as it is a commentary on twentysomethings in major cities in the ‘10s (and just a great character study). They jump into the pool with the Judd Apatow-produced “Love,” premiering tomorrow on the streaming service (and not to be confused with the Gaspar Noe film also on the service that features unsimulated sex and was in 3D theatrically). Meanwhile, HBO brings their one-two rom-com-dram duo back on Sunday with the launch of the second season of the underrated “Togetherness” and the fifth season of “Girls.” Love is in the air.

Netflix’s “Love” starts with its two leads in crumbling relationships. Nice guy Gus (co-creator Paul Rust) is in a happy union, but she ends up cheating on him. Mickey (Gillian Jacobs) is in an awful pairing with the kind of guy who stumbles through her window after a few too many, looking for a quickie and ignoring the fact that she’s trying to stay sober. By the end of the first episode, both are single and the two meet-cute at a local convenience store at which Mickey doesn’t have enough money for her coffee and Gus offers to buy. The strong second episode features Mickey and Gus on a bit of a morning adventure, both adrift and just enjoying each other’s company. Of course, Gus falls for the pretty wild child, but this is a romantic comedy so their inevitable union has to wait at least a few episodes. We get an awkward party at which Gus shows up way too early. We get Mickey trying to set Gus up with her roommate. We even get a drug-fueled adventure with Andy Dick.

It’s all perfectly likable without being overly memorable. Too much of the comedy in “Love” relies on awkward sitcomish set-ups like the date that dominates episode five. Rust and company can often turn the familiarity of the set-up—the aforementioned party ends up going much better for Gus than Mickey, for example—but it’s disappointing how often it falls back on elements that feel more like TV than reality (Gus is listening to audio of his own therapy sessions when Mickey gets in the car, for example). When it breaks the sitcom rules and just allows Rust and Jacobs to breathe life into their characters, it’s an enjoyable diversion. The leads are very entertaining. But each episode literally flows into the next—one episode’s final scene is often the first scene for the next—making it feel like a five-hour Judd Apatow romantic comedy, which I’m not sure anyone really needs. 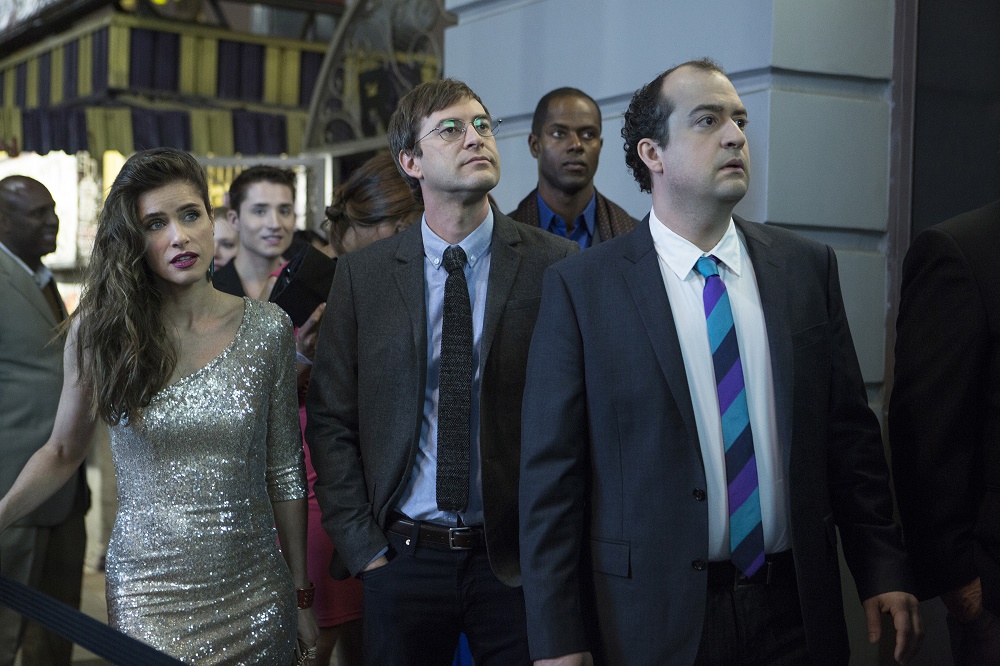 Disappointingly, HBO’s “Togetherness” is starting to feel a bit too familiar and set-up as well. The first season worked because of the totally believable performances by its quartet of talented leads—Mark Duplass, Melanie Lynskey, Amanda Peet and Steve Zissis. Created by Mark and his brother Jay Duplass, “Togetherness” found something fresh and new to say about marriage, relationships and insecurity in the ‘10s. The problem is that season two starts by saying the exact same thing. I was hoping these characters would be given some time in between seasons, but the Duplasses go in the opposite direction, picking up almost immediately after the season one finale. So, a now-skinny Alex (Zissis) still has unrequited feelings for Tina (Peet), and we have to deal with the fallout from Michelle’s (Lynskey) affair that ended last season. Too much of it feels like epilogue instead of another chapter. I’m going to stick with it and it hope that it develops its own personality, but I’m starting to wonder if the show wouldn’t have been better served as a one-season wonder, even with an ambiguous ending.

The arguable influence for both shows, HBO’s “Girls,” also returns on Sunday night to start its fifth season. It was recently announced that the sixth season would be the show's last, and I’m actually hopeful that Lena Dunham will go on to interesting things after this, as she’s been kind of stuck here for a few years. The premiere centers on Marnie’s (Allison Williams) wedding, which brings together the rest of the gang for the tense hours leading up the nuptials. Hannah’s (Lena Dunham) boyfriend Fran (Jake Lacy) shows up and gets pawned off on the guys in another house as the ladies get ready. Marnie is as high maintenance as you’d expect, while Jessa (Jemima Kirke) and Shoshanna (Zosia Mamet) do their best to calm the situation. Meanwhile, Adam (Adam Driver) isn’t keen on spending time with Fran and Ray (Alex Karpovsky) laments the love of his life getting married to another.

As it has been for some time, the premiere of “Girls” is perfectly enjoyable without feeling as current or well-written as those first two seasons. The ensemble has always been excellent and they do their best, but my issue with “Girls” remains tonal. Is Dunham mocking Marnie’s Bridezilla tendencies? The entire institution of marriage? All of her characters? As their behavior became increasingly less believable, the characters of “Girls” started to feel more like punching bags than real people. And that’s the ultimate test of all three of these shows: to watch people fall in and out of romance, it has to feel real, which we’re learning is, like love, harder than it looks.

Note: "Girls: The Complete Fourth Season" and "Togetherness: The Complete First Season" just hit Blu-ray if you want to see how we got here. They are typical-for-HBO strong with digital copies of each season and extensive special features on Dunham's show (including 7 audio commentaries and deleted scenes). The special features on the Duplass show are less extensive, but it's the better program of the two.