"Redline" is available on demand via Vudu.com and Amazon Instant Video. It is also on DVD/Blu-ray. 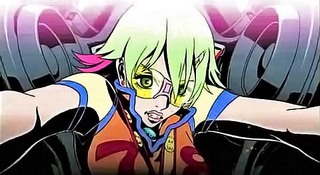 There are nights when I love nothing better than dressing up in a T-shirt, my saddle shoes and a poodle skirt like a high school teen from "American Graffiti" and get ready for some East Coast swing. If I could ride in a cherry retro car, that would just make my night perfect. You'd think that the anime "Redline," with its young Elvis-like rebel protagonist who flaunts his need for speed, would suit me just fine. My husband likes women in short skirts like the racetrack babes and bimbos of "Redline," so this anime should have offered something for both of us. Yet we found this futuristic racing anime a hyperactive snore. I'm not saying that 44-year-old director Takeshi Koike is musty, but the characters are dead on arrival and the techno soundtrack during the action sequences made us want to flee their funeral. 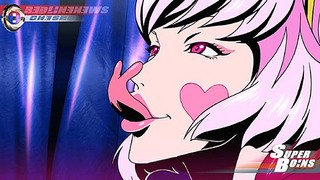 This anime is an oinky male chauvinistic mess in which women are served up as choice eye candy. 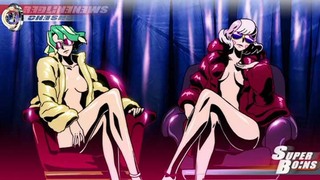 Most of the female characters haven't heard the mantra "lift and separate," so their "girls" keep the beat--boom, boom, boom, boom--with their movements. There are plenty of worm's-eye-view shots that aren't upskirt, but low angles give us bun shots for both the men and the women.

What really makes this adult is the detailed full-frontal female nudity and an is-she-or-isn't-she? "Basic Instinct" moment. 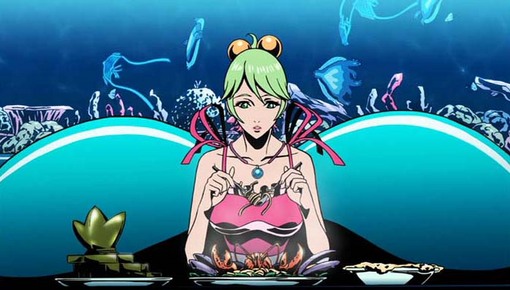 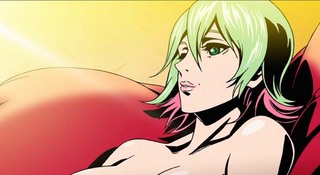 Yes, this is anime is made for your heterosexual male, especially if you have young Elvis fantasies. Our anti-hero, Sweet JP (voiced by Takuya Kimura), has a hair-ific sculpture-do that's King Creole pompadour meets modern mohawk. Sweet JP just misses winning the underground Yellowline race that would qualify him for Redline. The lovely green-haired Sonoshee (Yu Aoi) takes that honor instead. 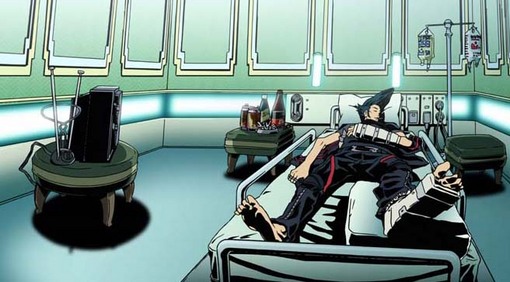 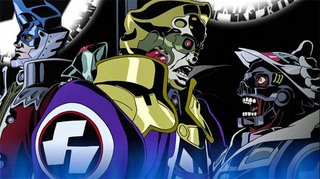 While recuperating in the hospital, JP learns he has qualified for Redline when the saner underground drivers have dropped out after the location of the underground race has been revealed: the militaristic Roboworld. The cyborgs who run Roboworld aren't happy with this questionable honor: they have weapons of mass destruction including a secret bioweapon called Funky Boy. At this point, you almost want the movie to turn into an espionage caper or a comedy. But while Funky Boy does create havoc, it's really the mob bosses JP needs to worry about. JP and his friend Frisbee (Tadanobu Asano) have a shady past that included fixing races. 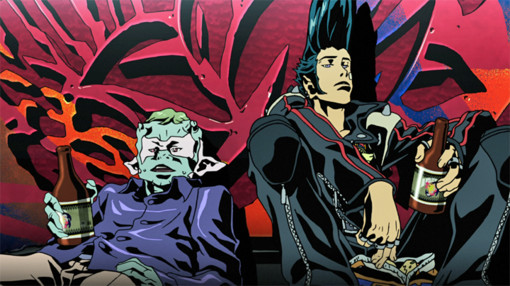 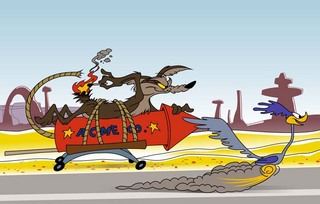 The world of "Redline" is filled with detailed characters, aliens and humans, inhabiting a weary world where our hero miraculously escapes death while aiding Sonoshee. Although the Redline race itself is a hard-hitting, no-holds-barred affair, the movie heads for an exceptionally mushy finish line. If it had taken a wacky Looney Tunes approach to humor (think anime Wile E. Coyote and Roadrunner), it might have made more sense and been more fun. You also might be able to forgive all those plot holes you could easily drive a classic muscle car through. 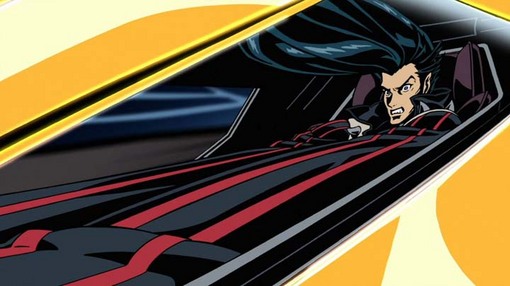 The 2010 "Redline" is Koike's first feature film, winner of the Audience Award for Best Animated Film at the 2011 Fantasia Festival in Montreal. Americans might be more familiar with his "World Record" segment (written by Yoshiaki Kawajiri) in the 2003 direct-to-video anthology movie, "The Animatrix." "World Record" was a more thoughtful short film. In the case of "Redline," the story was attributed to Katsuhito Ishii, and Ishii, Yoji Enokido and Yoshiki Sakurai are credited with the screenplay. There might have been one writer too many; "Redline" seems to have too many ideas and no clear vision. Some of those minor character detail segments are interesting but should have been edited out or saved as a special extra on the DVD/Blu-Ray. 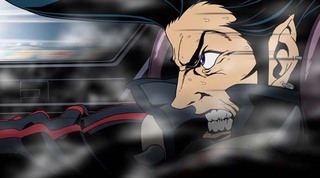 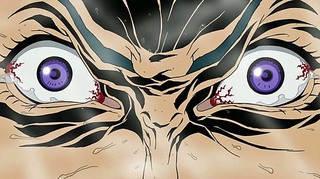 The animation itself is high-quality 2D, but you'd expect that from Madhouse, Inc.. The same studio produced "Paprika" (2006), "Perfect Blue" (1997) and "Tokyo Godfathers" (2003) by the late director Satoshi Kon. More recently, Madhouse won awards from the Japanese Academy Awards for Best Animated Feature for director Mamoru Hosoda's "Summer Wars" (2009) and the "The Girl who Leapt Through Time" (2006). Any one of those movies would be a better use of your time. The female characters in "Perfect Blue," "Paprika," "Summer Wars" and "The Girl Who Leapt Through Time" were earnest and nuanced. I felt a certain respect for them that wasn't apparent in "Redline." In "Summer Wars" and "The Girl Who Leapt Through Time" the characters existed in a world that could be real by moving us just a small tweak from the center, the attention to detail adding instead of detracting from the viewer's experience. Both focused on high school-aged protagonists but were less juvenile in the pejorative sense than "Redline." 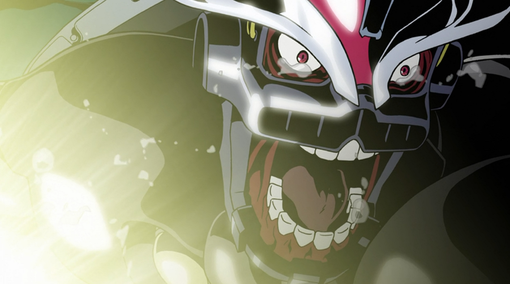 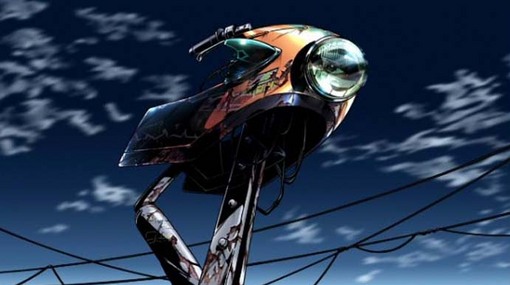 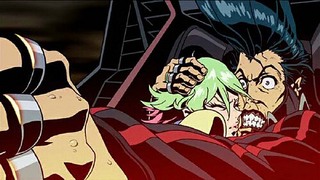 In contrast, "Redline," which did not earn a nomination, is a schizoid mess. It strives to be both a hyperbolic thriller and a soppy romance. Realistic mobster violence is contrasted with science-fiction bigger-is-better explosions. We're slammed from one genre into another and then -- pow! -- we shift gears again. The result is mental whiplash. Director Koike needs to learn how to streamline and balance the Kyogen-like humor you often see in Japanese anime with the more serious plot elements. 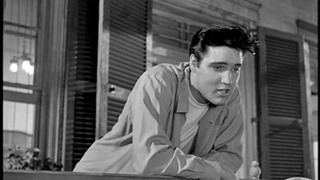 Even those longing for an "American Grafitti" type nostalgia-world are likely to be left unsatisfied. Certainly in the future one expects or hopes that the 1950s will continue to be re-imagined and even re-lived in. I think there will still be Elvis sightings and Elvis conventions for maybe centuries to come (I spotted a Las-Vegas white-jumpsuit Elvis a few years back running the L. A. Marathon and more recently a young Elvis dancing Michael Jackson's "Thriller"), but in "Redline" the Elvis-posturing hero seems to be pandering to a target population with a generic rendering modeled after James Dean and King Creole. That's just not enough to carry a movie, even with the blatant bimboism. If you're wondering whether or not an animated female is wearing underwear, I think you need serious mental help.