Netflix’s derivative attempt to siphon some of the sizable audience attracted to historical dramas like “Vikings” and “Da Vinci’s Demons” starts this Friday with the release of “Marco Polo.” Last year, on the arrival of the series “Derek,” I suggested that Netflix stood at a crucial turning point in not just its own history but that of television as a whole. Who better suited to take true creative risks? With the success of “House of Cards” and “Orange is the New Black,” Netflix seemed primed to push the envelope, truly offering the genre diversity that’s still missing even from great networks like Showtime and AMC. Who would have guessed that it would be Amazon that would unveil the most daring new program of 2014 in “Transparent”? And who would have guessed that the year for Netflix would be so deathly still? Second seasons of “House” and “Orange” were good—don’t get me wrong—but I keep waiting for this company to take the cultural currency they’ve earned and spend it on something truly interesting. There’s no greater example of a network playing it safe and treading water in 2014 than “Marco Polo,” a dull period drama without characters to care about or a narrative in which to invest. 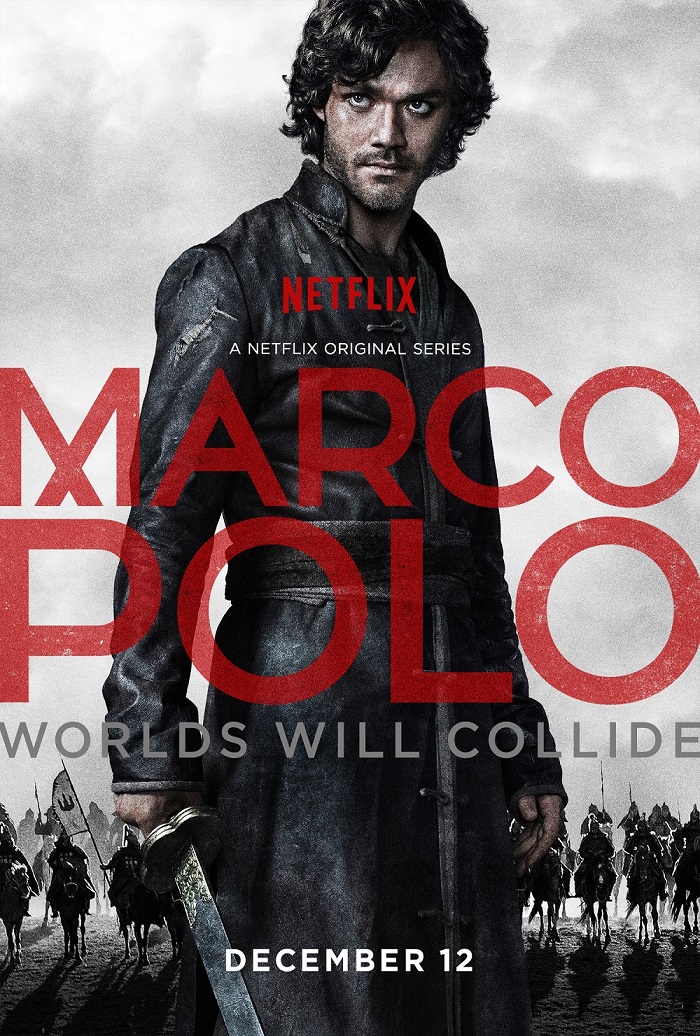 No, “Marco Polo” is not about your favorite swimming pool game as a child. It’s about the man who gave it a name, the legendary 13th century Italian (Lorenzo Richelmy), who we meet in the premiere as he tries to explore the trading route known as the Silk Road with his father, and essentially ends up being bartered into the court of Kublai Khan (Benedict Wong) in the process. Series creator John Fusco takes this vibrant setting and does so little with it that the results are somewhat baffling. “Marco Polo” is stunningly flat, as its title character is taught in the ways of the adventurer by walking B-movie clichés like the blind Kung Fu master (Tom Wu) who espouses eye-rolling wisdom like “Of the yin and the yang, you have an abundance of yang” and the forbidden princess (Zhu Zhu) who will surely teach young Polo a thing or two herself.

While Marco Polo is going through the coming-of-age motions, Fusco also spends time with “Game of Thrones”-esque challenges of power in the power structure of Khan. None of this is interesting in the slightest over the two episodes I watched, although Wong does hold the screen in a more interesting manner than the show deserves. He’s certainly more intriguing (as is Olivia Cheng as a concubine) than Polo himself. Newcomer Richelmy may look the part, but he is a flat lead, without nearly the amount of charisma an adventure show like this needs. When he's told "The blood of an adventurer courses through your veins," I literally said "Really?!?". Imagine a “Spartacus” without the leading men over the run of that surprisingly fun Starz show. There’s no reason to care about the title character of “Marco Polo.” That’s a bit of a problem.

Most of all, “Marco Polo” just isn’t fun. No one is going to write about the historical accuracy or character depth of the characters of “Spartacus,” but at least that show knew how to give viewers a good time. This is shockingly talky, as if someone thought what needed to be copied above all from “Game of Thrones” were the lengthy dialogue scenes.

The most interesting thing to me about “Marco Polo” is how its relative failure won’t make a dent in the legacy of the increasingly popular streaming service. Shows like Fall bombs “A to Z” and “Gracepoint” lead to headlines about the failures of their respective networks because of our traditional, antiquated ratings system. There’s no such flag of failure with Netflix. And that’s why they’re still, despite a disappointing 2014, in a position to change the medium, and shows like “Bloodline” in 2015 give me hope that they will. Take risks. Don’t play it safe. Give us something we haven’t seen before. And we’ll forgive shows like “Marco Polo.”