NBC’s “American Odyssey”, debuting on Sunday, April 5, 2015, is equal parts ambitious and frustrating. Attempting a multi-arc, “Traffic”-esque drama on network TV is kind of like trying to win the lottery for network execs nowadays. These programs just aren’t connecting outside of cable or streaming services like Netflix, and so one is tempted to applaud even the effort to produce a new series that tries to be more than another mystery series or singing competition. However, there’s a reason these shows aren’t working on the networks. Shows like “American Odyssey” sometimes feel like they exist in a vacuum in which the writers and producers hope that viewers haven’t seen the better shows from which they’re cribbing. TV viewers are getting smarter every year as more options in this alleged golden age of television naturally lead to more criticism. To be blunt, the bar is higher to clear than it was ten or certainly twenty years ago, when a show like “American Odyssey” would have felt like something new. Now it feels like “Homeland”, “House of Cards”, “The Blacklist” and a few modern war movies like “The Hurt Locker” were put in a blender and someone hit puree. The cast is uniformly strong and there are a few narrative threads that hint at something deeper and smarter under the superficial surface, but none of them are developed enough in the first three episodes to really hook me. And if viewers aren’t hooked after three episodes, the execs at that network should really buy another lottery ticket. 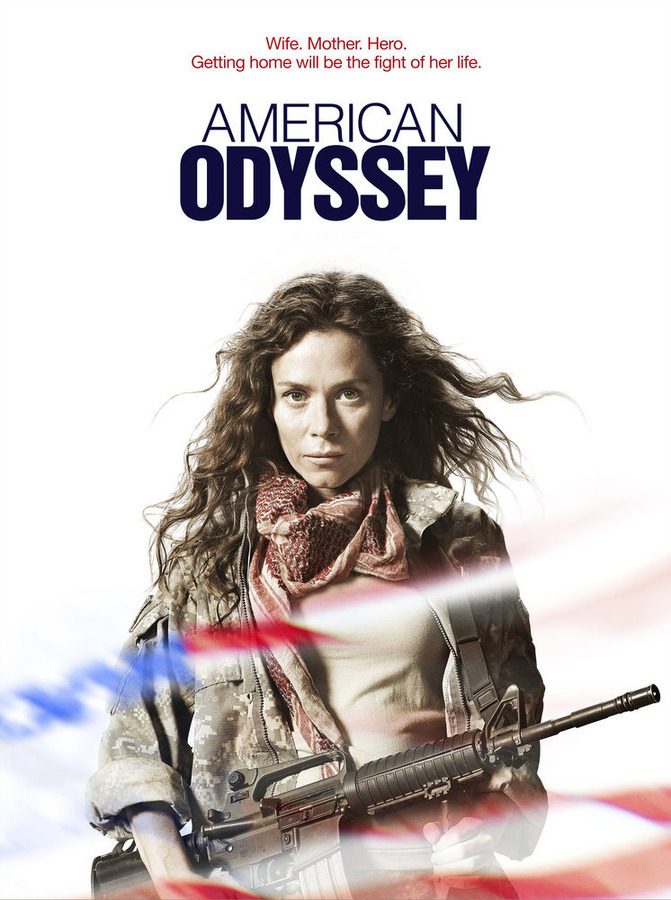 The great Anna Friel (so awesome on “Pushing Daisies”) stars as Sgt. Odelle Ballard, the only female member of a unit of American soldiers in North Africa who essentially stumble on and kill one of Al Qaeda’s top commanders in the opening scenes. While examining the scene, Ballard finds a digital document that implies that an American corporation may have been involved in terrorism. She copies the file to a flash drive and hides it, not long before her entire unit is taken out by a drone strike. The only remaining survivor in a hostile land, Ballard has to find her way home, knowing that in all likelihood she has a piece of world-shattering information that could get her killed if the enemies don’t take her out first. A strike unit led by “LOST”’s Adewale Akinnuoye-Agbaje also happens to be hunting her across North Africa.

Meanwhile, Ballard’s death is reported home to her husband (the great Jim True-Frost of “The Wire”) and a population increasingly in political upheaval (the world of “American Odyssey” seems to be one where the Occupy movement gathered more steam and attention). One of the leaders of the political opposition is the charismatic young Harrison Walters (Jake Robinson), who is approached by the awkward Bob Offer (Nate Mooney) with a startling piece of information. Bob has proof that Odelle is still alive. Why is the government pretending that she’s dead? And what would the revelation do to international politics? At the same time, former U.S. Attorney Peter Decker (Peter Facinelli) is in a deep crisis when he learns that the company he’s investigating for a merger might be behind all of the above, including the drone strike.

If it all sounds pretty engaging on a narrative level, it is to a degree. But the problem comes with momentum. Too much of the first three episodes of “American Odyssey” involve wheels spinning after the inciting incident. We know Odelle is alive. We see her. And yet we spend a remarkable amount of time with other people trying to figure out what we already know. It’s dramatically thin, at best, because the characters aren’t given any time to develop while they try to figure out, again, what we know is true. And each episode follows a bizarrely similar pattern, ending with our heroine in dire straits, about to be killed, only to make it out again (and, sorry, but don’t yell spoiler at me…if you don’t know Odelle is going to survive the series, you’ve never seen TV…she’s the face of the show.). The most engaging element of “American Odyssey” is in how it addresses the way that our technologically interconnected world impacts politics and even warfare in 2015, but it’s underdeveloped in favor of the “Will she make it and will the truth be revealed?” narrative.

The best reason to watch “American Odyssey” is the cast. Friel is very convincingly in the moment, conveying equal parts terror and determination to survive, although, again, the writers don’t give her nearly enough to do over the first three episodes. True-Frost is a great actor similarly hampered by an underwritten character. And “American Odyssey” doesn’t quite have the budget or production quality of programs like “Homeland” or “House of Cards”, which could push out the very audience that NBC is trying to bring back to the networks like Odelle Ballard finding her way home again. As shows like “American Crime”, “The Slap” and “Gracepoint” continue to fail to connect with audiences, one wonders if there’s anything that can truly make that journey possible.