"Legend of the Millennium Dragon" is available on DVD/Blu-ray and via iTunes and Amazon Instant. In Japanese with English subtitles.

When a movie jumps from one culture to another, especially one with a different language, expect some things to be lost in translation. If you're not up on Japanese history and folklore, you might be a bit mystified by director Hirotsugu Kawasaki's 2011 "Legend of the Millennium Dragon." Based on a two-book novel by Takafumi Takada (with screenplay by Naruhisa Arakawa and Hirotsugu Kawasaki), this engrossing animation with beautifully detailed background paintings whisks us into an ancient war between gods in Heian Japan.

Names are important in this quick-moving adventure. Shakespeare wrote that a rose by any other name would smell as sweet, but his historical tragedies would hardly make any sense to one who thinks the "War of the Roses" involves Michael Douglas and Kathleen Turner. "Holinshed's Chronicles and "Bulfinch's Mythology" won't help you here. Much of what happens in "The Legend of the Millennium Dragon" harks back to two ancient tomes: "Kojiki" and the "Nihonshoki."

The original title, "Onigamiden," means "Legend of the Demon God," but dragons are probably more attractive to an English-speaking audience than demons. A dragon does appear, but the story involves finding courage and a sacred sword. Then there's that age-old question: Just who are the demons?

The story begins as we soar above green forests, coming down to find Japanese Heian (794-1185) court warriors hiding among the bushes with their arrows ready. Further down, peasant villagers hide in their wooden homes, peering out from the holes in the wood board walls. Black-limbed, fierce-faced oni (demons) with glowing red eyes roam the dirt pathways. The archers send a great stream of arrows into the black horde, but arrows aren't enough and the soldiers attack with their swords.

The oni smolder and call upon the earth, which answers with an earthquake that releases a monster built of boulders. Think of the Fantastic Four's The Thing on rock steroids or perhaps a bull terrier that's as much mineral as animal. Behind the warriors, Buddhist priests are chanting. The foot soldiers are overwhelmed by the oni and run toward a large statue of Buddha (daibutsu), but the lead priest, Gen'un (voiced by Shido Nakamura) is able to ward off the oni through the power of prayer. If only dog training was that easy.

Now we leap into the present day to meet an unlikely hero -- a 15-year-old boy named Jun Tendo (Kensho Ono). Jun is a clutzy, glum boy, picked on by older bullies. His late father, however, was one of those everyday heroes; he sacrificed his life to save another. Jun is chased by an oni who drops from the sky through a hole in time. The oni chases Jun to a time portal -- a Buddhist temple where Jun meets Gen'un.

Jun means purity. Tendo means a god disguised as a child or something like a cherub. In the native Japanese religion of Shinto there are many gods, or kami. These are not necessarily like the Greek and Roman gods. Perhaps it's better to think of them as spirits or deities that can exist in human-like forms or as natural forces such as rivers, rocks or lightning.

When Buddhism was introduced to Japan by way of Korea in the fifth century, there was some friction between the families who remained true to Shinto and those who embraced Buddhism. Although the emperor receives his right to rule as the descendant of Amaterasu, the sun goddess, eventually the emperor also adopted Buddhism. Amaterasu gave her son, the Emperor Jimmu, three items: a sacred sword, a mirror and the jewel (Yasakani no Magatama). The sword, Kusanagi no Tsurugi, is as famous in Japan as Excalibur is among Anglophiles, and rumored to be the tail of a dragon. Amaterasu received the sword from her disgraced brother Susano-o. Their dysfunctional family matters could be a Jerry Springer episode, but what matters for this movie is that Jun is descended from Susano-o.

When Jun meets the people fighting the oni, he's put under the wing of Raiko Minamoto (also known as Yorimitsu Minamoto) -- a great and famous warrior who figures in a couple of legends including a battle with Tsuchigumo, a large spider. Tsuchigumo is also the name of Japanese clans who didn't swear allegiance to the emperor. Once Raiko (Takashi Kondo) is introduced, as you'd expect, Tsuna Watanabe (Shotaro Morikubo) also appears and they battle giant arachnids. If you're asking where are the Four Guardian Kings -- they appear near the end (and, for the record, aren't kings at all).

After summoning the dragon Orochi, Jun ends up in the enemy camp and we learn that the oni have a more human-like form and they have names: all names of various kami. Of course, there's a damsel to be saved, although she, Mizuha (Satomi Ishihara), isn't the whiny type at all, and in her oni guise, she is a formidable warrior. Her grandfather, Watatsumi is the sea god.

As a descendant of Susano-o, the original conqueror of the dragon known as Yamata no Orochi, Jun is the only one who can control the dragon. Although sometimes dragons can be good in Asia, the original Orochi was like the maiden-eating sea monster that Perseus killed. Here Orochi is more benign but he is the key to which side will win and Jun must decide which side he is on.

While other reviewers have compared this movie in terms of its back-to-nature theme to Hayao Miyazaki's 1997 "Princess Mononoke, " these movies take place in different historic periods (Muromachi versus Heian) and "Legend" is more concerned with historical figures and mythological entities. Miyazaki's animation, however, has a more consistent level of animation artistry. The characters in Kawasaki's film are flatter and move more stiffly. Within "Legend," there's a heavy contrast between the detailed painterly backgrounds (subject of the only extras on the DVD/Blu-ray) and the characters. The soundtrack of the action scenes in "Legend" has an annoying 1980s TV feel to it -- repetitive and Muzak-modern. Because this movie covers a lot of ground, there's less character development and more dependence on knowledge of either the novels (which I haven't read) or basic knowledge of ancient Japanese . Kawasaki previously directed "Naruto the Movie 2: Legend of the Stone of Gelel" (2005) and "Spriggan" (2001). 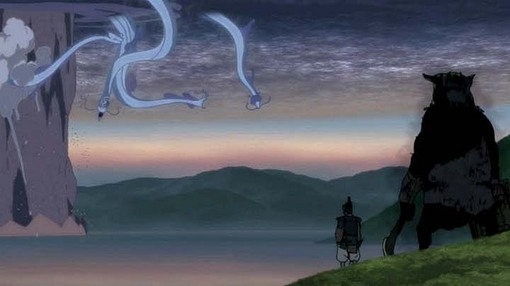 Still, "Legend" is entertaining enough, incorporating traditional tales and historical characters into a fantasy adventure. It draws parallels between epic courage and common acts of heroism while provoking thought about who the demons really are. In war, aren't they always the side we're fighting against?