It’s really not even close, right? "The Comedians" is not good, so that brings down that hour with "Louie". ABC has a couple of decent ones on Wednesday night, but come on. “Veep” and “Silicon Valley”, two of the funniest shows on TV, have been paired on HBO, returning Sunday, April 12th, for their fourth and second seasons, respectively. I’ve long been a fan of “Veep,” which starts with four episodes as perfectly conceived and executed as ever, and I’ve come around on “Silicon Valley”, a show that ended strong last season and returns remarkably confident for its sophomore outing. That’s the key word for both of these shows—confidence. Creators Armando Iannucci and Mike Judge know what they think is funny and know how to craft that into relatable, character-driven comedy. Both of these shows are defiantly smart—refusing to talk down to their audiences when it comes to politics or the tech world—and brilliant in the way they craft humor from plot-driven situations instead of merely crafting setup-punchlines for their great casts. It’s no coincidence that HBO has chosen April to launch their highly touted HBO Now program, which allows people to stream current shows on Apple TV or smartphones without a monthly cable subscription. This is the month of HBO all-stars with “Game of Thrones”, “Veep”, and “Silicon Valley”.

The night starts with “Silicon Valley”, which picks up shortly after the end of last season (which was just released on Blu-ray and DVD, by the way, along with the third season of “Veep”, for those of you who need to catch up or like to collect your favorite shows). Pied Piper just blew everybody’s mind at the Techcrunch: Disrupt presentation, leading to dozens of bids to invest in their compression software. Life is good for the boys, but fortunes are quickly reversed by two major events. First, their investor, Peter Gregory, passes away, as Judge and his team needed to write the real-life passing of Christopher Evan Welch into their series. Losing Gregory (and the explanation of his death really is one of the best scenes in the series yet, turning real tragedy into something hysterical) forces the Pied Piper gang to look elsewhere for the bulk of their funding, a decision that leaves them totally adrift when Hooli gets back in their business.

“Silicon Valley” has become a show about the intersection of intellectualism and male relationships. The guys of the Pied Piper group are undeniably brilliant, and yet they’re young enough to do childish things to one another and get fascinated by an app that just texts the word “bro” to other people. They are a modern take on “Revenge of the Nerds” if the characters in that movie were also eventual millionaires. Judge captures how these socially awkward creatures have become some of the most important and popular people in the world. But that doesn’t mean they know how to swing a bat or talk to girls. And even the successful ones are socially stunted. Chris Diamontopoulos is a fantastic addition this season as a multi-millionaire who lucked into his tech fortune and now wields it like a frat boy who won the lottery.

The cast of “Silicon Valley” was great last season, but they’re much more confident this season in the three episodes that were sent to press. Thomas Middleditch and T.J. Miller have a few scenes in the premiere in which they try to reverse-“neg” their competition that had me laughing out loud, while Martin Starr and Kumail Nanjiani have developed a reluctant friendship comedic chemistry that’s just perfect. There’s sort of a “fill-in” character for Gregory this season on whom I’m not yet sold after three episodes, but the saga of Pied Piper still promises to be one of the most interesting, and hysterical ones of the Spring. 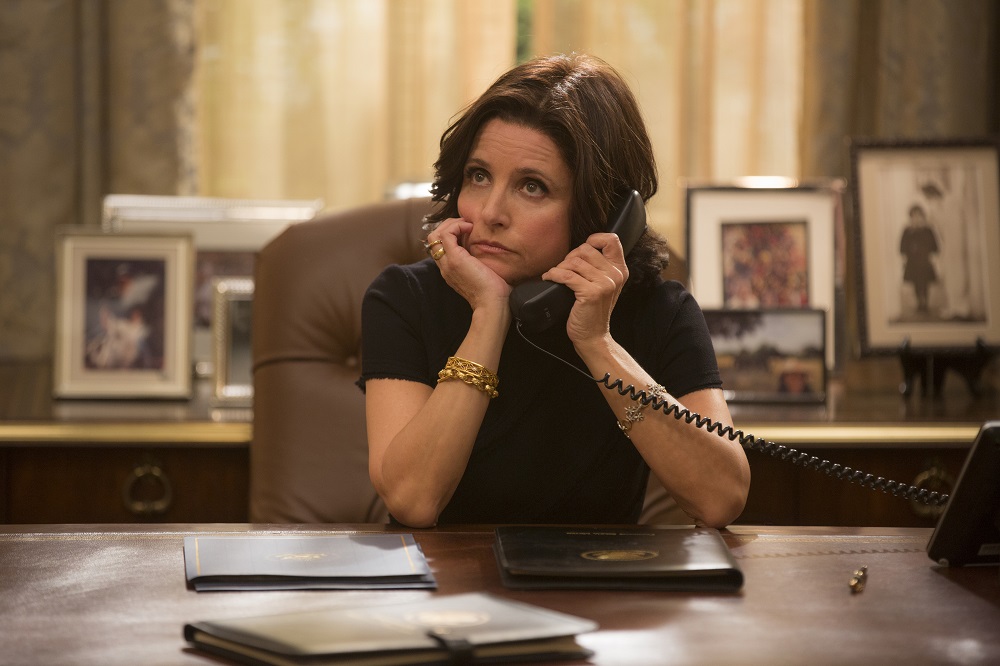 In a strange and beautiful way, "Silicon Valley" and "Veep" together seem to amplify each other's strengths. They're both about smart people forced to put out fires constantly to succeed. They're both commentaries on the fact that it's often the idiocy of others that holds us back.

Selina Meyer was made President at the end of last season, but still has to run a campaign for the next term or risk being an 8-month wonder. If Meyer and her team thought putting out fires from the Veep office was tough last year, imagine trying to do so as the leader of the free world while also running for re-election. Everyone on “Veep” this year is gloriously stressed out.

As is always the case in Iannucci’s world, tension leads to some of the funniest moments on the show, particularly from Anna Chlumsky and Tony Hale, who just get better every year. Hale’s Gary, who now seems a bit more redundant due to the increase in assistants that comes with the Oval Office, is one my favorite TV creations of the last decade. He has a scene with Louis-Dreyfus in episode two that is priceless, and surprisingly emotionally effective. As for the star of the show, there’s no one better in the comedy department on TV. Louis-Dreyfus often has find a way to make clearly scripted, yet brilliant, lines like “Gary, your inner child needs to grow an outer man” sound like something that Selina Meyer would come up with in the moment, without dwelling on the brilliance of the joke. She is crafting one of the best comedy performances in the history of TV here. On the current best comedy on TV.