Disturbance in a cathedral: HBO's "Pussy Riot: A Punk Prayer"

You know the story, even if you haven’t seen the video: on February 21, 2012, three women in balaclavas mounted the altar at Christ the Savior Cathedral in Moscow and began a punk performance, gesticulating and high-kicking to a song called “Punk Prayer.”

After 40 seconds, they were forcibly removed from the Cathedral. Ultimately, all three were arrested, and two of them were sentenced to two years in Siberian labor camps. Anything one might say about what makes their trial and imprisonment one of the most compelling news stories of the past several years might seem a little old hat at this point: it gives insight into the Russian judicial system, a snapshot of its social climate, and a peek into Vladimir Putin’s mind; the performers themselves are markedly intelligent, name-dropping Kafka and Debord during their defense, and certainly not, as their charge suggests, “hooligans”; the imprisonment is unduly harsh for such an act; the amount of attention the case has drawn from rock stars such as Sting, Paul McCartney, and Madonna has been historic. The documentary Pussy Riot: A Punk Prayer (HBO, June 10, 9 p.m.) lets us look closely at three young women who have been the subject of so much conversation that their personhood has almost been obscured. It provides a sense of background: the girls’ upbringing, their parents’ personalities, and, perhaps most strikingly, a sense of the opposition: the people who were offended by the rioters’ display. 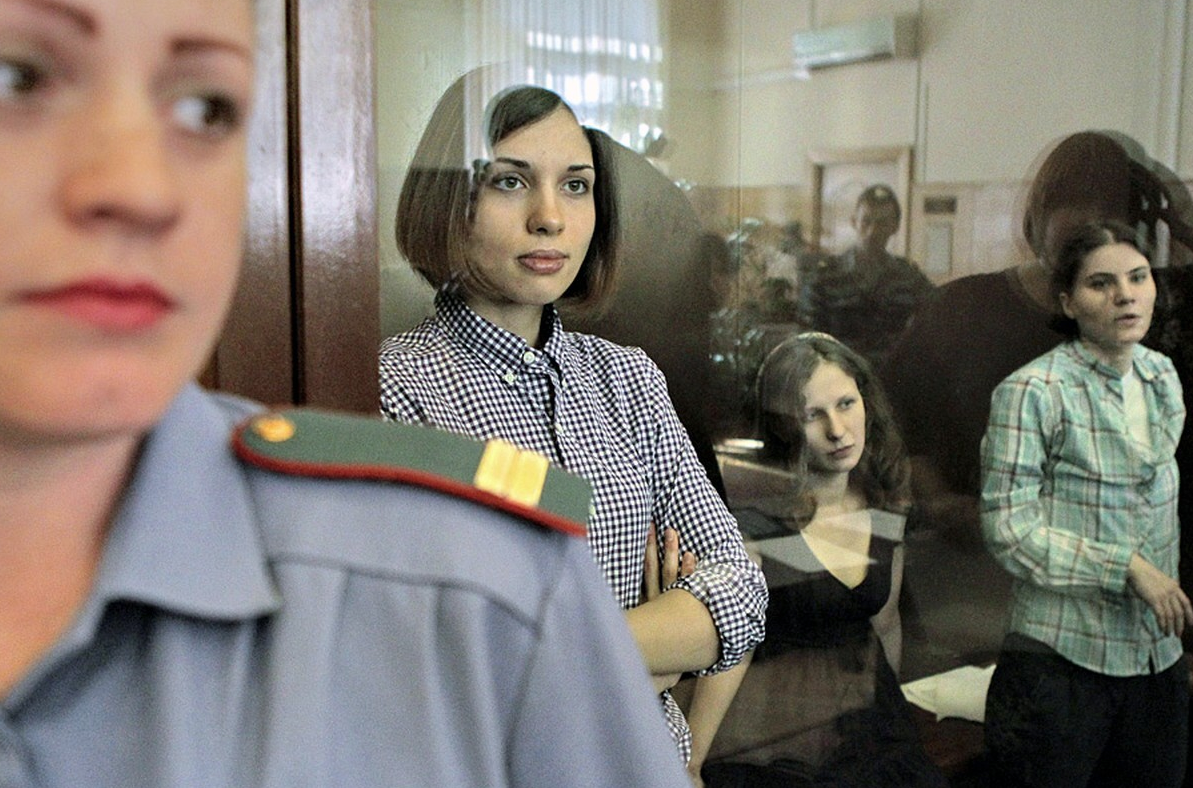 The women's names are Nadezhda (Nadia) Tolokonnikova, Maria (Masha) Alyokhina, and Ekaterina (Katia) Samutsevich. They are members of the Pussy Riot collective, a 10+-member feminist performance group that still stages events regularly. The photos many have already seen of Nadia, Masha and Katia have done a good job of evoking these women’s personalities. The smiles that flicker across their faces, Nadia’s fist raised in defiance, and their meditative gazes suggest that the act these women committed wasn’t nearly as random or as spontaneously iconoclastic as their video might make it seem. (Indeed, one of their defense layers refers to the event as “sloppy,” in order to make a point about the harshness of the punishment.) With more camera time, Nadia, whose fist has become a symbol for the whole event and its aftermath, gives the sense, though this is never stated directly, that she is something of a ringleader. What tells us this is the way she expresses herself: she utters each sentence with great calm, as when she corrects an interviewer early in the film, who mispronounces the name of the collective. “Riot,” she says. “Don’t fear that word.” Her large, placid eyes look at her interrogators as if to say that nothing they might possibly ask would rattle her. It’s little surprise when we learn, through some provocative clips, that she has also been a member of a group called Voina, whose public stunts include kissing policemen in streets and subways and staging an orgy in a biology museum. She exudes challenge and the desire to provoke, both essential qualities of charismatic group leaders. Masha's presence is challenging, too, but in a different way. She carries herself, when speaking to prosecutors, with an almost childlike forthrightness, despite the fact that she has a child of her own—and despite the fact that the film makes her seem, at moments, understandably wilted by the proceedings.

At the most important times, however, she rises to the occasion, defying her accusers with confidence and stridence; when asked if she understands the charges that have been brought against her, she simply states that she does not, and keeps stating it. Katia (whose imprisonment was suspended because she was removed from the Cathedral by authorities before she could do any high kicks or fist-pumps), seems as stolid as the others but possibly more vulnerable, or more ruffled. Late in the film, we see her scribbling intensely on her final statement in the courtroom; if this were a drama, we would think she’d cracked under pressure. Watching her reunite with her parents when her sentence is suspended is a moment of great relief—she is quietly the center of sympathy here.

But what of the parents, and the churchgoing witnesses to the event, and the government? The film balances fair-mindedness and empathy in this regard; in cases where subjects figuratively hang themselves, they do so with their own rope. Nadia’s father is definitely the hippest of the “older set.” He explains that he helped the women write “Punk Prayer”; after initially expressing concerns about it, he joined in when he saw his daughter’s enthusiasm, contributing the line “It's God shit,” followed by a guitar riff. The other parents read as incomprehending and stricken, but also proud of their children, in some parental way they can’t really express. Masha’s mother is the only parent who expresses any direct disapproval, alongside parental love. 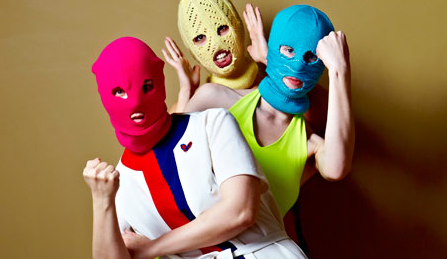 This disapproval is echoed and amplified in a different context by the older subjects interviewed, most of whom are infuriated for religious or political reasons, or both. Though some of the Russian Orthodox protesters who show up at the courthouse during the trial and who stage rallies before it look like thugs, wearing elaborate, slogan-bearing t-shirts that suggest nothing so much as heavy-metal fanboy gear, the older churchgoers express their objections, and their treatment by the filmmakers does little to dampen the lucidity of their statements: the church was rebuilt by the Russian people’s contributions after it was destroyed in the early 20th century, making it a place of both historical and religious value—and not a stage for political protest. Their statements, though, clear as they might be, only call into relief Pussy Riot’s statements, during the trial, that the performance was a strike against the union of church and state under Vladimir Putin’s regime, and not a strike against religion. We understand both sides, and yet have to feel more deeply for the young women, because… well, who wouldn’t? Putin himself appears several times in the film, projecting the same simian humorlessness he presents elsewhere—his bearing says more about the sociopolitical context in which this event occurred than any amount of courtroom footage might offer.
Advertisement

It would be easy to come away from this documentary with a number of clichés: thank goodness for American freedoms, music is the greatest outlet for political outrage, and so on. And yet the most lasting lesson the film teaches concerns the true nature of activism—one would have to think the young women, born and raised in Russia, knew what would happen to them. And yet the image the film projects is that of three people who have a different, many would say clearer, understanding of their society than their relatives or than other citizens and, in a particularly clear-headed moment, acted on that understanding, and in so doing, turned a very bright harsh light on injustice.