Perhaps I’m naïve. Perhaps I just watch so much TV as a part of my job that I don’t put together connections within the history of the form like everyone else does. There’s just too much of it rolling around in my brain. But it didn’t dawn on me how much Chuck Lorre’s “Two and a Half Men” owed to Neil Simon’s “The Odd Couple” until I saw CBS’s reboot of the latter, debuting February 19th on CBS after the series finale of the former. Watching Matthew Perry’s womanizing take on Oscar Madison and Thomas Lennon’s buttoned-up approach to Felix Unger, one is reminded how much Charlie Sheen and Jon Cryer owe to the seminal comedy duo. This isn’t so much an attempt to bring the success of Felix and Oscar into 2015 as it is to keep the money train of “Two and a Half Men” on the track. 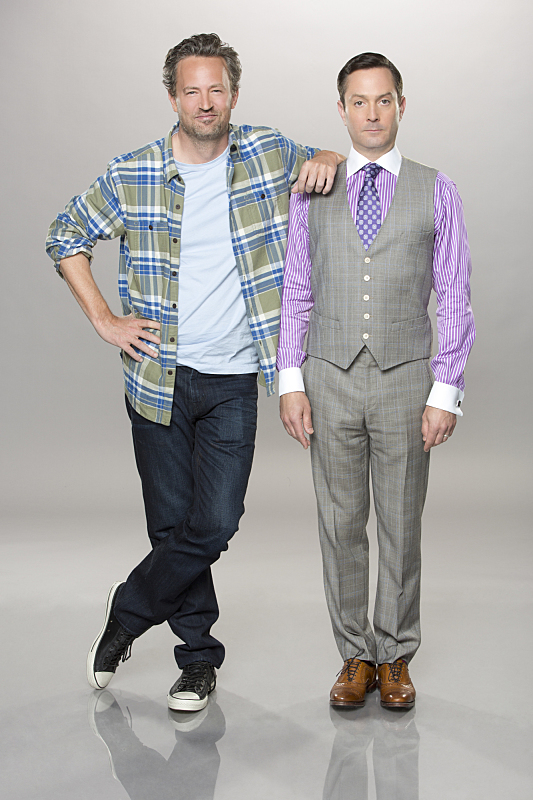 The humorous approaches to oil-and-water male friendship are nearly identical, as are the joke-writing tendencies. Women are there as sex objects or chains around the legs of married men (“You’ve met my wife…why would I want to live LONGER?”). Responsibility is seen as the enemy, although Perry and Lennon do an admirable job of trying not to let their characters exist purely as archetypes. Perry goes against his typecasting a bit in the Oscar role—he’s not the first person most casting agents would think of when considering someone in the mold of Walter Matthau or Jack Klugman, the legends who played the part in the film and TV series, respectively. Perry’s Oscar is more of a cad than a slob, the kind of guy trying to sleep his way through his apartment building. He’s a sports radio talk show host with a big heart with a quick wit but lack of cleanliness. Lennon’s Felix has also been slightly upgraded for the modern era, more nervous awkwardness than anal-retentive. However, Jack Lemmon, Walter Matthau, Tony Randall and Jack Klugman have given these two admittedly talented men some GIGANTIC shoes to fill, and right now they're swimming in them.

When Felix’s marriage falls apart, Oscar lets him move in. Oscar’s wife has passed recently enough that he hasn’t dealt well with living alone and could use someone around for support. Felix needs help meeting women, and getting back into the real world himself. Felix will teach Oscar to be a little more responsible; Oscar will teach Felix how to let go a bit. Hilarity will ensue.

Sorta. The basic problem with the pilot of “The Odd Couple” is its best bits, including the “F.U.” bit, are literally recycled from the original. It’s impossible to say how the show will progress from here, but it’s hard to believe that it will ever feel anything other than remarkably familiar and derivative of better properties with better casts. Whether older viewers compare it to the Matthau & Lemmon movie or younger viewers compare it to Sheen & Cryer on “Two and a Half Men,” being constantly compared to beloved older properties is not always the road to success. Maybe that’s why I never really got into “Two and a Half Men.” Maybe part of me knew I had seen it before.