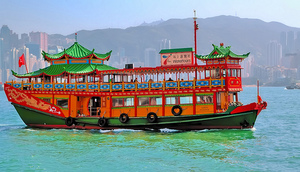 I came across a statistic the other day that claimed only about ten percent of Americans have traveled outside their country. There is no reason for this. The recession is not an explanation; the survey was taken back when Bear, Sterns was still paying its rent. This is the richest and least-traveled of "developed" nations, and I have a feeling many Americans thank heaven every day that they have never had occasion to leave it.

But this will not be a column boasting about my travels to every continent except Australia and Antarctica, and how as a wee lad I saved up my 75-cent an hour salary and boarded a DC-6 that took me to London by way of Gander, Reykjavík and Aberdeen. No, not even though I just googled Antarctica and this is all I found on the page: "stu is a legend and the good guy has cheap sales." That piece of internet vandalism, no doubt created by a friend of Stu's, was authored (I somehow know) by an American [1] who has never walked three steps outside his own state--of mind. I am enlisting a cyber-posse to track him down and airlift him to the South Pole with a hooded sweatshirt bearing the legend "I'm With Stupid" and an arrow pointing to a penguin. We will leave him with two cans of Ensure and a match.

I digress. I count among my friends the most-traveled man in history, Paul Theroux. Not only has he written many wonderful novels and short stories, but a shelf of travel books. He went by rail from Europe to Japan, and back through Russia. Twice. No, Friend of Stu, the train didn't go on the water. He also traveled from Cairo to Cape Town. From Boston to Argentina. From Peshawar in Pakistan to Chittagong in Bangladesh. He walked entirely around Great Britain. He kayaked around the islands of Oceana. He lived in East Africa, Singapore and London. He and his wife Sheila live in a house on stilts in a forest on the windward side of Oahu, where they raise bees. Of course their summer home is on Cape Cod, less than a 24-hour commute. 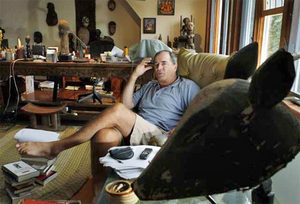 Paul Theroux at home for a change

On quiet days he sits on his veranda in the shade, benevolently overlooking his bees and coffee trees, always with a book. He is the most widely-read man I know, and he suffers my company because I have heard of Mrs. Gaskell and Oliver Onions, and I share his opinion that for a book to read on a journey, nobody beats Simenon. I told him one quiet afternoon that with his eyes he had seen more of the surface of the earth at ground level than any other man had, and any other man ever would. He said he had never thought of it that way.

Has travel broadened him? He says not. He is rather notorious for having written, "Extensive traveling induces a feeling of encapsulation; and travel, so broadening at first, contracts the mind." I know in a way what he means. On our honeymoon aboard the Orient Express, Chaz and I met a retired Houston man who had no home and literally lived all the year round on cruise ships and luxury trains. He told us one of the hazards of taking every meal on a ship was that, after dining on land, he often walked away from his table without remembering to pay the check.

On the evening of the day we arrived in Venice, he took us to dinner at the Hotel Cipriani, where he was greeted by name. A furious thunderstorm ripped outside the windows, and lightning illuminated a vaporetto churning through the waves. Over our meal, at his dictation, we noted down some of his friends we should look up: The doorman at the Imperial in Hong Kong, the maitre 'd at Raffles, a friendly bar man at Claridge's. Encapsulated.

Why then, does Theroux travel? "The greatest justification for travel," he wrote in Dark Star Safari, "is not self-improvement but rather performing a vanishing act, disappearing without a trace. As Huck put it, lighting out for the territory." I have written about this: The bittersweet pleasure of being where nobody knows you, and nobody you know can find you. What do you do? Why, order a cup of coffee and open your book, obviously. When you are in such a place, you experience a sort of nostalgia even while you're still there. 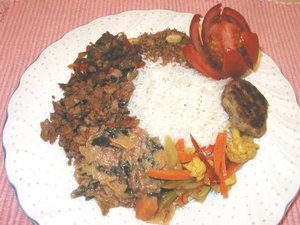 Rijsttafel: Ten bucks and up, even way up

As for the reading, one of the best ways to read is to get yourself right off the map and out of the reach of cell phones and annoying twits. Hemingway traveled without them. So can you. On a trip you can really dig into a longer book. In Venice for the 1972 film festival, I spent long afternoons flat on my back at the Hotel des Bains, unable to stop reading The Golden Bowl. In the evenings I would break loose for a couple of movies. That was a good book.

That may not broaden your mind, but at least it gets you off the map. Obviously, the way you broaden your mind through travel is to stop traveling and stay somewhere. In my mind I have always envisioned a room overlooking the Grand Canal, a bed-sitter in London, a cheap little inn in Japan. Never happened. I did spend a year studying in Cape Town. Never mind what I learned there. The point is, I was there, not here. The United States was away up there overhead to my left somewhere on the map. I internalized the fact that most people live somewhere else, and are perfectly happy doing so.

I suspect some Americans believe there is something wrong with people who don't live here--not that we want them to immigrate, God forbid. If you have a friend who has even once referred to a foreign language as "jabber," travel far away from that friend, whose whole neighborhood is likely to be poisonous. If you are free to travel, do it now. Later may be too late. "Life is what happens while you're busy making other plans." 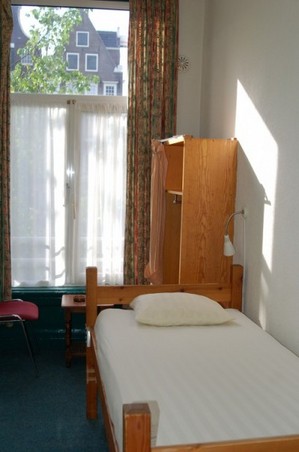 Your $42.61 room in Amsterdam. You expected maybe a suite?

What do you mean, you can't afford it? Right now, today, you can get on board a 14-day cruise in Miami and sail to Madeira, Portugal, Spain, Le Havre, Dover and Amsterdam, with shore leave at major ports of call. The lowest cost is $46 a night. That includes your bed, meals and entertainment. What's your overhead at home? Tonight, you can find a single room in Amsterdam for $42.61 a night. Meals? For your dinner you want rijsttafel, an Indonesian dish more popular in Amsterdam than anywhere else in the world. This is a mound of rice surrounded by small servings of various meats, veggies and sauces. You mix and match. You can find it under $10, or you can find it for a lot more. There are rijsttafel buffets, but not for $10.

But enough of this. I'm not cloning Arthur Frommer. Maybe you don't even want to go to Amsterdam. Maybe you want to go to Asia. Anywhere. Make your own plans. How do you find cheap prices? You're on the internet right now. Use it. Oh, never sign for a hotel room without asking to see it first: That way they'll show you the best one they have available. The point is: Get going. Spring is right around the corner. Dip your toe in the world. There's more to see in Amsterdam than at Six Flags. We are lucky to speak English, so we can be understood most places. India has half as many English speakers as America. China is catching up. Mark Twain, who wrote The Innocents Abroad and Following the Equator, advises us: "Travel is fatal to prejudice, bigotry, and narrow-mindedness, and many of our people need it sorely on these accounts. Broad, wholesome, charitable views of men and things cannot be acquired by vegetating in one little corner of the earth all one's lifetime."

Footnote [1]:Actually, I learn from reader Paul H., the IP address of Friend of Stu traces him to New South Wales, Australia.

Venice is more romantic (and cheaper) in the winter.

Next Article: A roll of whose dice? Previous Article: Don't move. I want to move. Don't move.

A roll of whose dice?