Traveler to the undiscovere'd country 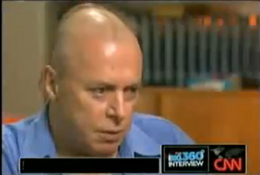 I watched Christopher Hitchens' CNN interview with Anderson Cooper with gathering sympathy. He had cancer. He was going to die. Apart from that, the treatment seemed about to kill him, and he was feeling very unwell. This man who often had a cigarette or a drink close at hand sat with the quiet of a man drained of energy, and reached out a hand to take a sip of water.

He was in the hands of medicine. He was hopeful but realistic. He will come to feel increasingly like a member of the audience in the theater of his own illness. I've been there. There were times when I seemed to have nothing to do with it. One night, unable to speak, I caught the eye of a nurse through my open door and pointed to the blood leaking from my hospital gown. She pushed a panic button and my bed was surrounded by an emergency team, the duty physician pushing his fingers with great force against my carotid artery to halt the bleeding. I was hoisted on my sheet over to a gurney, and raced to the OR. "Move it, people," he shouted. "We're going to lose this man."

I was calm and completely lucid. I watched like an interested observer. The pain medication probably detached me. My wife hadn't then told me that after a previous rupture, I'd been declared dead on the operating table. Dying isn't so bad. It's getting sick and dying that's the hard part. I had radiation which made me nauseous for months. I have no reason to doubt that chemotherapy, which Hitchens is on, can be much worse. 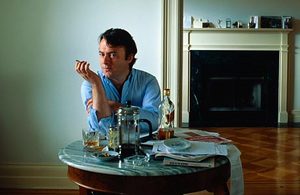 The militant atheist mentioned to Cooper "the astonishing number of prayer groups" that were supporting him. He noted there were also groups praying for him to suffer and die. And other groups praying that he be redeemed, "so my soul gets saved even if my wretched carcass does not."

"So you don't pray at all?" Cooper said. "No, that's all meaningless to me. I don't think souls or bodies can be changed by incantation." There was a catch in his voice, and the slightest hint of tears. That was the moment -- not the cancer or the dying -- that got to me. Prayer groups also prayed for me, and I was grateful and moved. It isn't the sad people in movies who make me cry, it's the good ones. 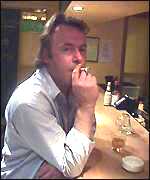 As it happened, a day or two before I learned of Hitchens' illness, I'd finished reading his new memoir, Hitch-22. The man can write. He has lived a life. He has seen for himself, making it a point to travel regularly to dangerous and wretched nations. He has been a man of political passion, beginning first as a Trotskyite and becoming in recent years a supporter of the Neocon war in Iraq. He has said he now believes capitalism to be a more useful economic tool than socialism, yet remains a believer in the views of Trotsky and Marx. He voted for Nader in 2000, said he leaned slightly toward Bush in 2004, voted for Obama in 2008. So he actually is that rare creature, a swing voter. He takes his positions after a great deal of thought and he makes his reasons clear. I now understand more fully why an intelligent person could be a Trotskyite or a Neocon, although I continue to believe not many intelligent people are. I think it takes more conviction to be a Trotskyite, because that persuasion has always been unpopular and at times fatal.

Hitchens shows himself as a man temperamentally driven to test his own opinions. He reasons instead of proselytizing. He exists as that most daring of writers, a freelance intellectual. He's a good speaker, can be funny, has bad teeth, is passably good-looking, and is at no pains to be a charmer. He's popular because he's smart. He says nothing merely to be politic, although in some situations he may keep his meaning coiled well within. Some years ago when I met him at the Telluride Film Festival, I was unaware of his fairly recent defection from the Left. I told him I read him in the Nation, which he'd by then severed his ties with. His reply was a masterpiece of irony, masked as egotism: "How clever of you."

Revised the morning of 8/13/10 to describe Hitchens' politics more accurately. 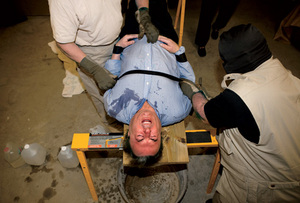 I've read his book God is Not Great: How Religion Poisons Everything. I believe religion in its many forms has been the greatest single inspiration for man's inhumanity to man, but I would not agree it poisons everything. Those rare people who practice in their lives the underlying principles of their religions are most often good for themselves and others. Those who use religion as a means toward thought control and rigid conformity are twisted and deranged. Anyone who would use religion as their reason to cause unhappiness to another is guilty of a great sin. These sins are committed first against their children. They have learned nothing from their faiths. The extremists of both Christianity and Islam, for example, follow lives of violent repudiation of the beliefs of their own religions.

Hitchens' remarks on the passing of Jerry Falwell were on the mark. Interviewed during a CNN obituary of Falwell, Hitchens brought a sharp turn in the program's tone: "The empty life of this ugly little charlatan proves only one thing, that you can get away with the most extraordinary offenses to morality and to truth in this country if you will just get yourself called reverend. Who would, even at your network, have invited on such a little toad to tell us that the attacks of September the 11th were the result of our sinfulness and were God's punishmen -- if they hadn't got some kind of clerical qualification?"

Reverend Pat Robertson stepped into Falwell's shoes with his contemptible claim that the earthquake in Haiti was the result of that nation's "pact with Satan." It's shameful that churchgoers sincerely trying to live good lives are subjected to such poisonous roadblocks in their search for meaning.

As to the larger question of whether God exists, I would agree with Hitchens that we can't rule out the possibility of some indefinable first mover, although I'm sure he doesn't mean mover as a being but as a force. To hope we can learn how the universe came about is admirable; one might as well call that hope by any name. Whatever one calls it, it's by definition outside the reach not only of our knowledge, but of knowledge itself. 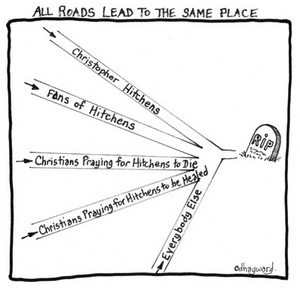 I was asked at lunch today who or what I worshipped. The question was asked sincerely, and in the same spirit I responded that I worshipped whatever there might be outside knowledge. I worship the void. The mystery. And the ability of our human minds to perceive an unanswerable mystery. To reduce such a thing to simplistic names is an insult to it, and to our intelligence.

Christopher Hitchens has spent his lifetime trying to figure out that small part of life the mind can comprehend. Now he's closer than most to that undiscovere'd country, from whose bourne no traveler returns. We all began that journey at the moment of our birth. We will all surely complete it. What lies beyond is no more knowable than what lay before. As a mourner in a pet cemetery in "Gates of Heaven" so truly observes, "Death is for the living and not for the dead so much."

[ The drawing is courtesy of David Hayward at www.nakedpastor.com. This entry was revised on the morning of 8/13/10 to make the description of Hitchens' politics more accurate. ]