This cripple is a Smart Ass

Some of the fiercest and most useful satire on the web right now is being written by a man who signs himself Smart Ass Cripple. Using his wheelchair as a podium, he ridicules government restrictions, cuts through hypocrisy, ignores the PC firewalls surrounding his disability, and is usually very funny. Because he has been disabled since birth, he uses that as a license to write things that others may think but do not dare say.

Humor can be the most effective political weapon. Smart Ass Cripple is passionately political. His name is Mike Ervin, and he's a disability rights activist. His belief is that the disabled need more independence, and less condescending "supervision." When he was a small child, he and his sister were poster children for "Jerry's Kids." He came to believe the annual Jerry Lewis telethons were a fraud, and their primary purpose was to showcase Jerry as a sort of benevolent god for the disabled. He founded the organization "Jerry's Orphans" as a way to dramatize how society pities crippled children (or "criplets," as Mike calls them), and then, when they're older and not as cute, is eager to warehouse them out of sight in restrictive care facilities.

Here's what he wrote recently:

And here is how he applies that situation to society at large:

As it happens, people in wheelchairs have been a part of my life since childhood. I grew up in Urbana, Illinois, which is flat as a pancake and ideal for people in wheelchairs. After World War II, the University of Illinois began an effort to make its campus accessible for wheelchairs. It modified dorm rooms and rest rooms, built curb cut-offs and ramps, installed lifts on city buses, and so on. This seemed natural to me. There were "wheelchair students," as we called them, in many of my classes. In the summer of 1962 I was part of the support staff for a tour of Southern Africa by a dozen Illinois wheelchair athletes. We visited hospitals where the "treatment" for the paralyzed or disabled was to leave them in hospital beds for the rest of their lives.

Mike Ervin and others began to agitate for more opportunities for cripples--which is the non-PC word he always, defiantly, uses. He writes:

Mike has been arrested more than a dozen times for civil disobedience, and got a lot of publicity when he and other Jerry's Orphans started chanting "Stop the Telethon Now!" during a Labor Day telecast. But I didn't set out today to write about Mike Ervin the activist. I wanted to write about Smart Ass Cripple. The condition of being crippled can lead to great frustration and anger. I've experienced a little of that myself in recent years. Imagine how it builds over a lifetime.

The weapon Smart Ass uses against that is withering, merciless humor. It is empowering. He is like a standup comic who can't stand up, unleashing a torrent of truth that makes us laugh helplessly because we know it is true. Richard Pryor could do that. So could Mark Twain. When Jonathan Swift proposed that the starving people of Ireland eat their babies, he was a pioneer of the tradition. Here it is at work:

People think protesting is constantly exciting but it's a lot like baseball. There are spurts of action between long lulls. You spend most of the time either plotting your next move or waiting for the other guy to make his move.

You get bored. You need someone to talk to. So I turned to the cripple next to me and asked him a probing question.

"So where are you from?"

"You know what the Utah state bird is?" he asked me.

I'm not well-schooled on state birds.

"And do you know what happens when you feed a seagull Alka-Seltzer?" he said.

I'm even less schooled on the effects of indigestion remedies on state birds.

"It explodes! You know why? Because birds can't burp!"

Hearing this made me want to ask him a thousand questions. But I was afraid that whatever I asked, he might very well give me the answer. It's like when I see people on street passing out pamphlets and wearing t-shirts that say JEWS FOR JESUS. I really want to ask them how someone can be a Jew for Jesus. But I'm afraid they'll tell me. So instead I avoid all further eye contact.

But I really wanted to ask the cripple from Utah how the hell he discovered that seagulls explode if you feed them Alka-Seltzer. Is blowing up your first seagull a rite of passage in Utah? Do they feed seagulls Alka-Seltzer at school science fairs?

Or was this something he discovered as a result of being crippled? Because being crippled can be really boring sometimes, too. Boredom does strange things to the mind. When not anchored, the mind meanders off in all kinds of directions. So I really wanted to ask the Utah cripple outside the White House if that's how it happened with him. Was he similarly stranded one day and a seagull landed on his windowsill? Was he taking Alka-Seltzer at the time? Did it suddenly occur to him that he'd never heard a bird belch?

Like I've said, I went to a state-operated boarding school for cripples that I call the Sam Houston Institute of Technology (SHIT).

Here's an even more amazing fact: There are still a whole bunch of places like it going strong all around the country. They're often called "developmental" centers or "training" centers. But these places are like fly paper for cripples. If we land there, we're probably stuck there until we die.

Here's an amazinger fact than that: Some people fight hard to keep those places open, to the point where it takes contentious lawsuits to shut them down.

And here's the amazingest fact of all: The defenders of these places ALWAYS say they're standing up for our freedom of choice. Cripples ought to be able to live forever without parole, if we so choose, in a place where you have about as much autonomy, privacy, creative stimuli and ability to take risks as you do in a hospital ward.

Some people say using the "r" word is now as offensive as using the "n" word. The people who believe this most are the people formerly known as mentally "r." They want to be called intellectually disabled or more respectable stuff like that.

Fair enough. We'll not use the word "r" here at Smart Ass Cripple. Consider the word stricken, in spite of its element of comic allure. I am not "r" so who am I to tell them what they have to call themselves? And I can kind of see their point. Some people referred to the "r" kids at the cripple elementary school I attended as "delayed." That's a helluvan identity to have to carry around. "Hello, I'm delayed."

So I will comply. But I have to admit that I'm doing so with a great deal of consternation. The banishment of the "r" word was the result of a massive re-branding campaign. There were public service announcements and billboards. I believe I even saw a Don't Use the "R" Word blimp. And there was no overt opposition. No one dared put up a billboard that said "Screw You 'R' People!"

It's not that I don't get pissed off about how some people use the word cripple, especially journalists. They talk about the crippled Fukushima nuclear power plant or the crippled Greek economy. They use crippled as a synonym for fucked up. I guess they look up fucked up in the thesaurus and the first word that pops up is crippled.

That's fucked up. But I'd rather hammer away relentlessly at the word cripple like a coked-up blacksmith until cripple is forged into something new. Maybe being crippled will become synonymous with being awesomely cool. From that day forward, when people visit the Sistine Chapel, they'll look up at all the Michelangelo stuff and say, "Man, that is sooooooooo crippled."

If anybody starts a Don't Use the "C" Word campaign, I'm afraid I'll have no choice but to be on the other side. It may be me against the world, but I can't imagine giving up without a fight. I will engage them in a contentious battle of dueling blimps. I'll write a protest song: Ain't Nobody Takin' My Cripple Away.

If they want to take away my "c" word, they'll have to pry it from my cold, dead fingers.

We were protesting outside of the White House. The police moved in with bolt cutters, unshackling those who handcuffed their wheelchairs to the gate. The rest of us lined up along the fence.

My dad had three kids with his first wife. None of them were crippled. Then my dad had three more kids with my mom. All crippled. I was the last one to come along so it must've been me they were talking about that day back when I was a tiny criplet and my mom overheard one of her in-laws say, "I blame her for this."

Go here to view "The Kids Are All Right,"

Here is the web site for Smart Ass Cripple. Mike and his wife, Rahnee Patrick: 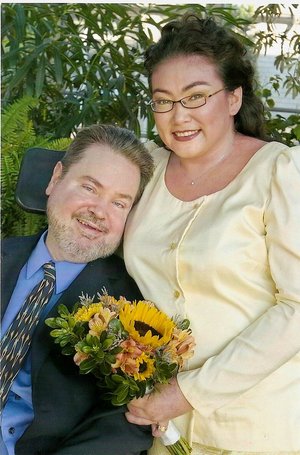