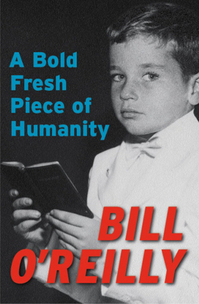 Bill O'Reilly has been brought low by the same process that afflicted Jerry Springer. Once respected journalists, they sold their souls for higher ratings, and follow their siren song. Springer is honest about it: "I'm going to Hell for what I do, and I know it," he's likes to say. O'Reilly insists he is dealing only with the truth. When his guests disagree with him, he shouts at them, calls them liars, talks over them, and behaves like a schoolyard bully.

I am not interested in discussing O'Reilly's politics here. That would open a hornet's nest. I am more concerned about the danger he and others like him represent to a civil and peaceful society. He sets a harmful example of acceptable public behavior. He has been an influence on the most worrying trend in the field of news: The polarization of opinion, the elevation of emotional temperature, the predictability of two of the leading cable news channels. A majority of cable news viewers now get their news slanted one way or the other by angry men. O'Reilly is not the worst offender. That would be Glenn Beck. Keith Olbermann is gaining ground. Rachel Maddow provides an admirable example for the boys of firm, passionate outrage, and is more effective for nogt shouting.

Much has been said recently about the possible influence of O'Reilly on the murder of Dr. George Tiller by Scott Roeder. Such a connection is impossible to prove. Yet studies of bullies and their victims suggest a general way such an influence might take place. Bullies like to force others to do their will, while they can stand back and protest their innocence: "I was nowhere near the gymnasium, Sister!" A recent study of school shootings found that two-thirds of all the shooters were victims of bullying, and perceived themselves as members of persecuted minorities.

What are TV shouters telling their viewers? They use such anger in expressing their opinions. Who are they trying to convince? They're preaching to the choir. Their viewers already agree with them. No minds are going to be changed. Why are they so mad? In a sense they're saying: You're right, but you're not right ENOUGH! I'm angrier about this than you are! Viewers may get the notion that there's unfinished business to be done, and it's up to them to do it.

How can one effect change? By sincere debate and friendly persuasion? O'Reilly sets the opposite example. He brings on guests who represent the "enemy," doesn't seriously engage their beliefs, and shouts: Be quiet! I'm right and you're wrong! I stand for good and you stand for evil! I'm not exaggerating. Sometimes those are the very words he uses.

O'Reilly represents a worrisome attention shift in the minds of Americans. More and more of us are not interested in substance. The nation has cut back on reading. Most eighth graders can't read a newspaper. A sizable percentage of the population doesn't watch television news at all. They want entertainment, or "news" that is entertainment. Many of us grew up in the world where most people read a daily paper and watched network and local newscasts. "All news" radio stations and TV channels were undreamed-of. News was a destination, not a generic commodity. Journalists, the good ones anyway, had ethical standards.

In those days, if you quoted The New York Times, you were bringing an authority to the table. Now O'Reilly--O'Reilly!--advises viewers to cancel their subscriptions to a paper most of them may not have ever seen. In those days, if the wire services reported something, it probably happened. Today the wire services remain indispensable, but waste resources in producing celebrity info-nuggets that belong in trash magazines. Advertisers now seek readers they once thought of as shoplifters. If nuclear war breaks out, the average citizen of a Western democracy will be better informed about Brittny Spears than the causes of their death.

I remember radio stations that provided variety during the day. News, music, variety shows, soap operas, nighttime comedy and drama, sports. All mixed up together. At night, a sleepy-voiced announcer presided over classical music, jazz, or torch songs. On Sunday mornings, WGN in Chicago had a guy who played pop tunes on a Mighty Wurlitzer. They weren't concerned about a tune-out factor. Millions of Americans watching Ed Sullivan saw opera singers as well as Elvis and the Beatles. Orson Welles might come out and perform a little Shakespeare before the trained dogs and the acrobats. Ed introduced every act in the same tone of voice--his only tone of voice, possibly. He wasn't trying to sell us on anything. He didn't talk like it was supposed to be good for us.

Now it's "more music and less talk." Or no music and all talk. Or all news and nothing else. Or all sports talk People aren't in the habit of searching the dial. Talk radio used to feature talkers who discussed things in general. Now most of them are political. Howard Stern is one of the few smart enough to win listeners who are actually interested in whatever he happens to say. It is hard to conceive of the 38 years during which millions of people "from coast to coast" woke up and tuned in NBC for Don McNeil's Breakfast Club, "coming to you live from the Tip-Top Tap in the Allerton Hotel, high above Chicago's Magnificent Mile." They went to sleep listening to, "From the Cinegrill Lounge of the Hollywood Roosevelt Hotel on beautiful Hollywood Boulevard, swing and sway with Sammy Kaye!" When I got to those cities, I made it my business to visit the Tip-Top Tap and the Cinegrill Lounge. Don McNeil was still in business, still issuing his "last call for breakfast."

Gone. All gone and almost forgotten. And the audiences gone too, those who sought companionship rather than goading. There is little comfort to be had from today's polarized shouters. They are discontented, and they think you should be, too. They inspire fear and suspicion. There is a conspiracy, and you are the target. Dark forces are at work. There was a time when ordinary Americans would have been deeply offended by the way O'Reilly speaks about their President--any President.

Sometimes O'Reilly is compared with Father Coughlin, a popular far-right radio commentator in the 1930s who fanned the flames against Roosevelt and warned about immigration and "foreigners," by which it was understood he meant primarily Jews. O'Reilly objects to such a comparison, and certainly there is no reason to consider him anti-Semitic.

But a team of media researchers at Indiana University studied every editorial broadcast by O'Reilly during a six-month period and found a similar nativist cast. Among the findings of their paper published in the Journal Journalism Studies was this one:

According to O'Reilly, victims are those who were unfairly judged (40.5 percent), hurt physically (25.3 percent), undermined when they should be supported (20.3 percent) and hurt by moral violations of others (10.1 percent). Americans, the U.S. military and the Bush administration were the top victims in the data set, accounting for 68.3 percent of all victims.

In their analysis, the researchers concluded:

What were those "same techniques?" The Indiana team quoted an earlier study:

* Name calling -- giving something a bad label to make the audience reject it without examining the evidence; * Glittering generalities -- the opposite of name calling; * Card stacking -- the selective use of facts and half-truths; * Bandwagon -- appeals to the desire, common to most of us, to follow the crowd; * Plain folks -- an attempt to convince an audience that they, and their ideas, are "of the people"; * Transfer -- carries over the authority, sanction and prestige of something we respect or dispute to something the speaker would want us to accept; and * Testimonials -- involving a respected (or disrespected) person endorsing or rejecting an idea or person.

These techniques, first listed in the 1930s, paint an uncanny portrait of what you can see and hear any night on the O'Reilly Factor.

Using analysis techniques first developed in the 1930s by the Institute for Propaganda Analysis, [professors] Conway, Grabe and Grieves found that O'Reilly employed six of the seven propaganda devices nearly 13 times each minute in his editorials. His editorials also are presented on his Web site and in his newspaper columns.

I wonder which one of the seven he didn't use.

A Serial Bully is defined as one who takes behavior first employed in childhood and carries it forward into adult life, at home, in the workplace, or both. Here is what the British website bullyonline has to say:

The serial bully appears to lack insight into his or her behaviour and seems to be oblivious to the crassness and inappropriateness thereof; however, it is more likely that bullies know what they are doing but elect to switch off the moral and ethical considerations by which normal people are bound. If bullies knows what they are doing, they are responsible for their behaviour and thus liable for its consequences to other people. If bullies don't know what they are doing, they should be suspended from duty on the grounds of diminished responsibility and the provisions of the Mental Health Act should apply

O'Reilly shouts at the TelePrompter

The first technique cited on the Indiana list above is Name Calling. In using this practice Bill O'Reilly reminds me of columns Sydney J. Harris of the the Chicago Daily News liked to write, containing lists of terms headed "You say" and "I say." Here are some of mine:

I say Biased. You say Fair and Balanced.

I say Environmentalists. You say Tree-Huggers.

And on and on and on. If generally neutral terms were used (Conservative, Liberal, Democrat, Republican) every discussion wouldn't be determined by the terms used to open it. That would lose viewers. Good. It would be healthier for the body politic if they just watched mainstream television.

A valuable site about bullies.